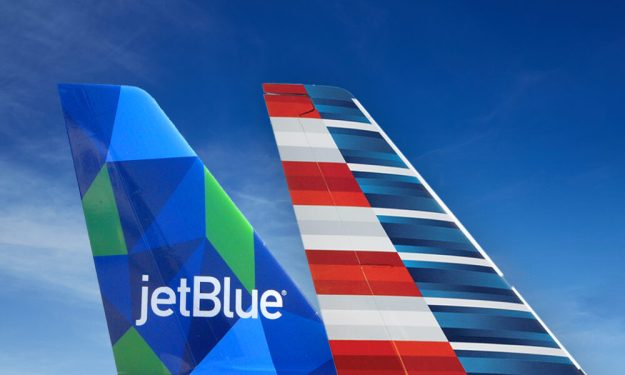 JetBlue Airways and American Airlines Group Inc. today announced their strategic alliance is moving ahead following review by the Department of Transportation (DOT). Both carriers will begin implementing key aspects of this innovative and customer-focused alliance in phases, offering more seamless connectivity and better travel choices on routes to and from New York (JFK, LGA and EWR) and Boston (BOS). The carriers also expect this alliance will accelerate each airline’s recovery from the pandemic as customers are attracted to the expansion of options and enhanced service.

“With this alliance, American and JetBlue will operate the biggest network for our customers in the Northeast, which will allow American to grow our mainline operations as we recover from the pandemic,” said Vasu Raja, American’s Chief Revenue Officer. “We are already planning to launch new international routes to Athens and Tel Aviv this summer, which are just two of many new routes we plan to launch.”

Important components of the alliance will be introduced starting in the first quarter of 2021 and phased in over the course of the year:

Department of Transportation terminates its review
Following an approximately six-month review, the DOT has agreed to terminate its review of the alliance in exchange for a series of commitments to ensure the alliance delivers consumers benefits without harming competition. These include growth commitments to ensure capacity expansion, slot divestitures at JFK and at Washington, D.C.’s Reagan National Airport (DCA) and antitrust compliance measures. Beyond today’s agreement with the DOT, the carriers will also be refraining from certain kinds of coordination in city pair markets where they are substantial competitors to each other and there is little service from other airlines.