Alaska Airlines guests will have the opportunity to relax in the new Alaska Lounge at San Francisco International Airport by late summer, as the airline announces updated plans for Bay Area travelers. Under this new plan, Alaska will move into the former American Airlines Admirals Club space in Terminal 2, enabling the airline to open a new lounge just as guests start to return to travel. 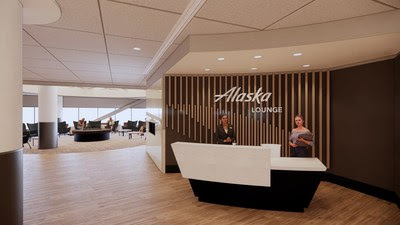 The announcement comes as Alaska Airlines continues to expand its presence in the Bay Area. Alaska now operates more than 80 daily flights out of the Bay Area (including SFO, San Jose and Oakland) and has more than 1,700 Bay Area-based employees. In June, Alaska will begin service to Anchorage and Bozeman, Montana, from SFO. Other recent service announcements include:

When completed, this new lounge will be the second-largest of the Alaska Lounges at just under 10,000 sq. ft., behind Alaska’s flagship lounge in Seattle’s North Satellite Terminal. This space is also centrally located in Terminal 2, with easy access to additional dining and shopping options for guests. The Alaska Lounge at SFO joins seven other lounge locations in the Alaska Airlines portfolio, in Seattle; Portland, Oregon; Los Angeles; New York – JFK; and Anchorage.

The Lounge will include an espresso bar staffed by a trained barista, a full bar featuring complimentary local craft brews, West Coast wines and spirits and a wide selection of guest favorites like made-to-order pancakes, steel-cut oatmeal, fresh salads and hearty soups.

When it opens, Alaska expects the Lounge to create 30 jobs in the Bay Area. More details and timing will be announced over the coming months.