Surging cases of COVID-19 in South America is forcing governments to restrict between borders which is affecting air travel.

Chile has closed its borders for the month of April.

Bolivia has closed its border Brazil.

Peru had an Easter lockdown.

Previously LATAM Airlines Group announced a significant expansion of its cargo operations with the conversion of up to eight Boeing 767-300ER aircraft into Boeing Converted Freighters (BCF) in the next three years. This represents a freighter capacity growth of up to 80%. This plan seeks to increase the service options and leverage the synergies of operating a single type of aircraft.

The plan is divided in two gradual stages. The first phase is based on four confirmed conversion slots with Boeing with re-deliveries between 2021 and 2022. Upon completion of that phase, LATAM’s cargo operators’ fleet would reach a total of 15 Boeing 767-300ER freighters. The second phase includes four conversion options with Boeing that would allow aircraft to be added between 2022 and 2023. If all options are executed LATAM would operate a total of 19 767-300ER freighters.

“Despite the deep crisis the industry is enduring due to the pandemic, we maintain our commitment to support the region’s exporters and importers by providing them with more and better options to carry their cargo to their destinations. As a result, we growth plan have been accelerated with conversion of up to eight Boeing 767-300ERs in the next 30 months. This investment, together with the significant cost efficiencies that we have generated during the Chapter 11 process, puts us closer to achieving our aspiration of being the best alternative for cargo customers,” said Roberto Alvo, CEO of LATAM Airlines Group.

Andrés Bianchi, LATAM Cargo’s CEO, highlighted the advantages of the Boeing 767-300ER freighter. “Combining the passenger belly operations of LATAM Airlines Group with 15 to 19 Boeing 767-300ER freighters efficiently strengthens our customer value proposition. These conversions will enable the cargo affiliates to grow in key segments such the Colombian flower market or imports to Brazil. It also allows our affiliates to expand their network in domestic markets where e-commerce is rapidly generating an increase in air cargo traffic. Growing with Boeing 767-300CFs freighters is extremely efficient as it is the optimal aircraft for all these undertakings and we can take advantage of the benefit of operating a single fleet type.” 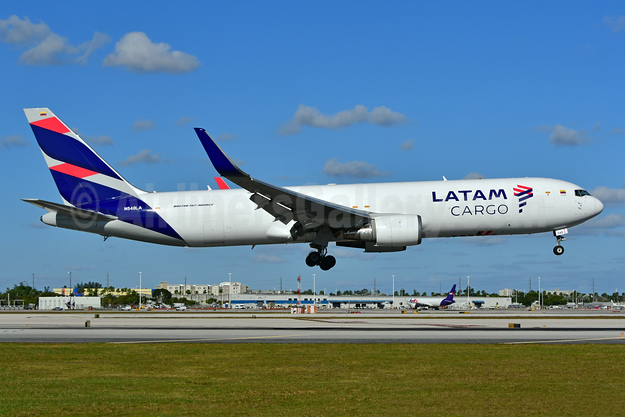 Throughout 2020, LATAM Cargo played an active and vital role in ensuring essential supplies reached Latin American countries, especially in places with extreme and difficult-to-access areas like in countries such as Brazil, Chile, Colombia, Ecuador, and Peru. LATAM also worked to safeguard the supply from the import and export sectors in South America, even increasing their shipment frequencies by more than 40% in some markets. To achieve these results, LATAM operated passenger planes for the exclusive transport of cargo.

In addition, during the pandemic, LATAM landed for the first time in China, searching for medical supplies for South America, ultimately making more than 80 flights to the Asian continent. LATAM currently continues to make trips to Europe and China to transport COVID-19 vaccines into the region, and the LATAM Group’s Solidarity Plane Program has made its resources available for the free transport of vaccines in domestic markets.