Wizz Air has announced its 6th Italian base, in Naples together with 18 new international and domestic routes.

The airline will base 2 Airbus A321 aircraft at Naples airport in August and September 2021. The 18 new services to 9 countries announced, will complement the already operated 8 routes from Naples Airport.

Wizz Air started flying to Italy in 2004, and since then has carried over 40 million passengers to and from Italy on its over 200 routes. Wizz Air is dedicated to continue developing its network and making affordable travel accessible to an ever increasing number of people. With the experience of providing low fare high quality services in the past 17 years. The establishment of Wizz Air’s newest, 44 base in Naples follows the opening of five bases (Milan Malpensa, Catania, Palermo, Bari and Rome Fiumicino) of the airline in Italy. 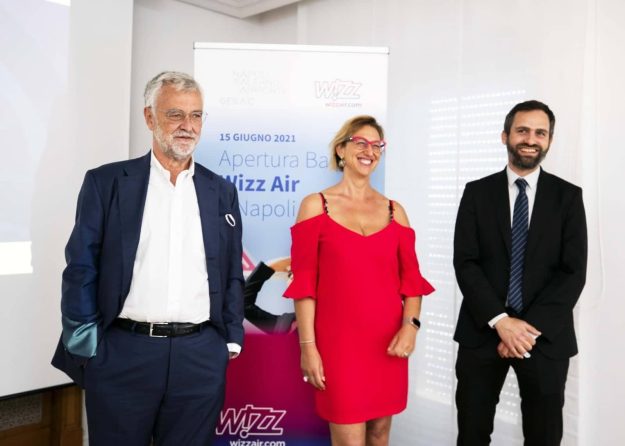 Speaking at the press conference in Naples today, George Michalopoulos, Chief Commercial Officer of Wizz Air Group said:“I am delighted to announce Wizz Air’s newest base at Naples International Airport and the quadrupling of our capacity at the airportand the quadrupling of our capacity at the airport. Wizz Air’s 6 Italian base together with the basing of 2 Airbus A321neo aircraft and the addition of 18 new routes is a further testament to the airline’s firm plan to establishing itself as the most trusted and sustainable player among Italy’s top 3 airlines. It is a true honour to serve Italy’s third biggest city and support the ramp up of the local economy and the tourism sector.  Our brand new A321neo aircraft as well as our enhanced protective measures will ensure the best possible sanitary conditions for travellers while operating with the lowest environmental footprint. We look forward welcome passengers back on board with great service and a smile”

* One-way price, including administration fee. One carry-on bag (max: 40x30x20cm) is included. Trolley bag and each piece of checked-in baggage is subject to additional fees. The price applies only to bookings made on wizzair.com and the WIZZ mobile app. Number of seats at indicated prices are limited.