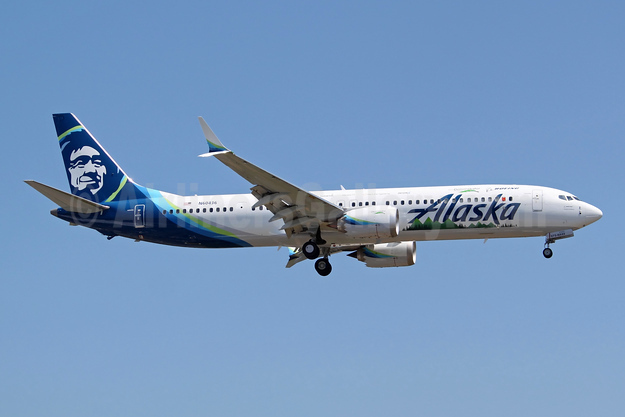 Alaska Airlines is getting ready to take delivery of a new MAX 9. Previously destined to go to Corendon Dutch Airlines as PH-CDK, the airframe is now being prepared for Alaska as N979AK. The aircraft is painted in this special Boeing ecoDemonstrator livery. Pictured is the right side.

As previously reported, Boeing and Alaska Airlines announced they are partnering on the latest Boeing ecoDemonstrator program and will flight test about 20 technologies on a new 737-9 to enhance the safety and sustainability of air travel.

In flights beginning this summer, Boeing and Alaska will test a new halon-free fire-extinguishing agent that significantly reduces effects on the ozone layer, evaluate an engine nacelle designed to reduce noise and assess cabin sidewalls made from recycled material, among other projects.

Since 2012, the ecoDemonstrator program has accelerated innovation by taking nearly 200 promising technologies out of the lab and testing them in the air to address challenges for the aviation industry and improve the passenger experience.

In five months of ecoDemonstrator flight tests, Boeing and Alaska will work with nine other partners to test new technologies. After tests are complete, the airplane will be configured for passenger service and delivered to Alaska. The program’s technologies include:

Boeing’s current and future airplanes leverage a number of technologies evaluated in previous ecoDemonstrator testing, including:

ecoDemonstrator test flights are flown on a blend of petroleum-based and sustainable aviation fuel. SAF is in regular use today, reduces life-cycle CO2 emissions by up to 80%, and offers the most immediate and greatest potential to reduce emissions over the next 20 to 30 years in all commercial aviation markets.

In January this year, Boeing committed to make sure its commercial airplanes are capable and certified to fly on 100% SAF by 2030. The company also plans to work with regulatory authorities and across the industry to raise the current 50% blending limit for expanded use of SAF. Boeing’s 2018 ecoDemonstrator 777 Freighter made history as the world’s first commercial airliner to fly on 100% sustainable fuel.