The Seattle Kraken’s inaugural hockey season just got even sweeter for fans. Starting today through the end of the season, Kraken fans who wear the teams’ jersey can board early on all Alaska Airlines flights departing Seattle-Tacoma International Airport (SEA) and Paine Field (PAE) this season. 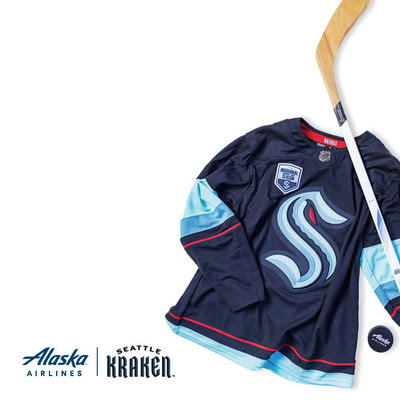 It’s been over a year since the Kraken name and brand was unveiled, providing a sneak peek at the jersey’s colors and overall design. Fans clamored this week to get a jersey when they went on sale, including many Alaska Airlines employees.

Alaska is the founding partner and official airline of the Kraken. We can’t wait to welcome our hometown to games via Alaska Airlines’ Atrium, which will serve as the main entrance for all events at the new Climate Pledge Arena. Located on the south side of the arena, the Atrium spans 36,000 square-feet and feature stories and images reflecting the Pacific Northwest and the travel opportunities within our region and across the globe. Fans will see Alaska branding on the ice and on several boards around the hockey rink during games.