We’re all about exploring new horizons at Alaska Airlines. As we continue to grow, we’re landing at new destinations – the places our guests are eager to visit. The newest dot on our expanding route map: Cleveland! We’ll start daily nonstop service between the northern Ohio city and Seattle/Tacoma on June 16. On that same date, we’ll also add a second daily roundtrip flight between Seattle/Tacoma and both Cincinnati and Columbus. 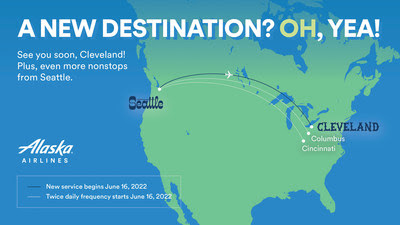 Next summer, we’re currently scheduled to be the only airline connecting Cleveland, Cincinnati and Columbus with nonstop service to the West Coast. We’re also set to have the most flights between the West Coast and Ohio.