Smartwings landed its Boeing 737 MAX 8 in Antarctica.  The landing at Troll Airfield at the northern tip of Antarctica took place on January 26, 2022, and 737 MAX is the first aircraft of its type here. 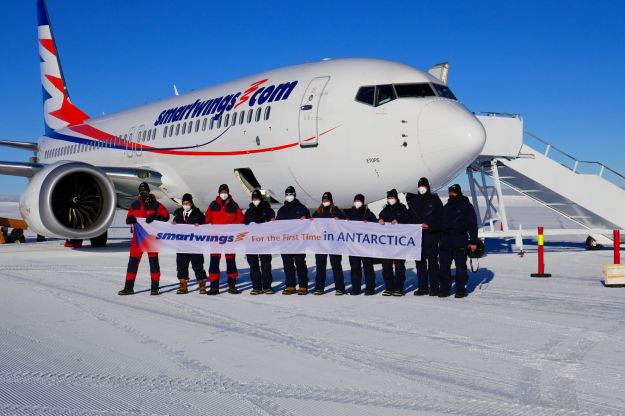 The flight was chartered by Aircontact to carry the members of the Norwegian Polar Institute to their base. The Troll Research Station is located 235 kilometers from the coast in the eastern part of Princess Martha Coast, in Queen Maud Land, Antarctica. Run by the Norwegian Polar Institute, the station is dedicated to environmental and climate monitoring, scientific research, and mapping. The runway is built on a glacier at an altitude of 1232 meters.

The flight beyond the Southern Arctic Circle went smoothly. Smartwings’ Boeing 737 MAX (registration OK-SWB) took off from Oslo, Norway, heading for Cape Town, South Africa (with a stopover in N’Djamena, Chad). From Cape Town, the aircraft continued to Antarctica. The flight lasted 6 hours and the plane stayed in Antarctica for 2 hours, before setting off for Oslo via Cape Town again.

The crew of the Smartwings aircraft received continuous weather reports and updates on the airport operability during the flight via datalink and satellite phone communication. The 3,000m long runway covered with ice is used for landing and takeoff. The thick of the ice was measured and analyzed to withhold the operation. The surface was specifically prepared, and braking action measured by Norwegian Polar Institute prior to operation to allow takeoff and landing according to regulations and aircraft manufacturer standards keeping all the safety margins.

Landing on a glacier requires a specially trained crew which consisted of 3 experienced captains – Tomáš Nevole, Jan Šťastný and Lubomír Malík. “It is necessary to prepare thoroughly for such a flight. The preparations took many months, and the flight and landing went smoothly,” says Smartwings captain and flight director Tomáš Nevole.

The captains had to undergo special training to become familiar with the area and the airstrip. All crew members undertook Arctic Survival training. The aircraft was equipped with Polar survival kits including polar clothes for the crew and in addition some critical spare parts were carried on board.

The weather was closely monitored 5 days prior the operation using the forecast of German meteorological institutes DWD and AWI with resources on Antarctica. For this type of operation, the company’s air traffic control will assign at least one dispatcher who will constantly monitor and evaluate the condition of the airstrip and the weather, and will remain in touch with the crew in case of any changes. During the flight, the technical condition of the aircraft is being evaluated by the Smartwings technical department in Prague through an automated data link. 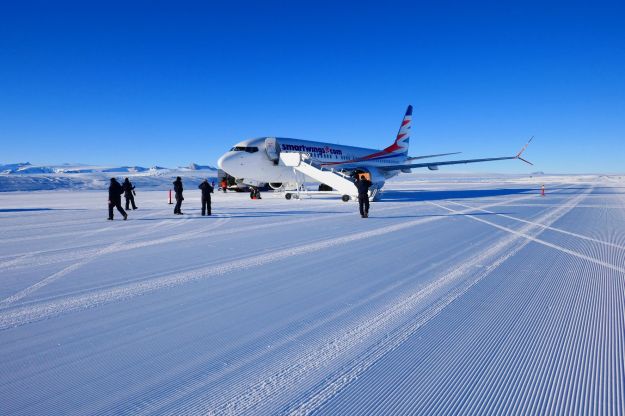 It is not possible to plan any alternate airport instead of Troll Airfield, which has all the necessary equipment, including but not limited to: adequate firefighting services, tailor- made approach charts and experienced staff responsible for Troll Airfield lead by Sven Lidström from the Norwegian Polar Institute. Due to the fact that it is a so-called isolated airport, where there are no other landing options within reach, it was necessary to obtain assessment and approval from the Czech Aviation Authority for Troll as Isolated Aerodrome.

Smartwings Group aircraft fly to more than 400 airports around the world per year. Until now Antarctica has been the only continent where Smartwings plane has not landed yet.