SkyWest, Inc. has announced that its wholly-owned subsidiary SkyWest Airlines has entered into a Payroll Support Program Extension Agreement with the U.S. Treasury Department to receive a total of approximately $233 million under the Consolidated Appropriations Act of 2021. SkyWest received half of the $233 million today and expects to receive the second half in February 2021. In consideration for the funding, approximately $40 million will be in the form of a ten-year, low interest unsecured term loan, and SkyWest will issue to the U.S. Treasury Department warrants to purchase approximately 98,815 shares of SkyWest common stock at a strike price of $40.41.

The funds received under this Payroll Support Program will be used to pay for the wages, salaries and benefits of thousands of SkyWest Airlines employees. This Program includes certain restrictions similar to the original Payroll Support Program, including limitations on involuntary terminations and furloughs through March 31, 2021, restrictions on the payment of dividends and the repurchase of shares through March 31, 2022, the recall of involuntarily terminated or furloughed employees after Sept. 30 with pay from Dec. 1, 2020 to March 31, 2021, and certain limitations on executive compensation through October 1, 2022.

Additionally, SkyWest also announced that SkyWest Airlines has entered into an amendment to its Loan and Guaranty Agreement with the U.S. Treasury Department extending the deadline pursuant to which SkyWest Airlines may borrow under the $725 million facility from March 26, 2021 to May 28, 2021. The other terms of the Loan and Guaranty Agreement were not amended and remain in effect.

Commenting on the results, Chip Childs, Chief Executive Officer of SkyWest, said, “Over the past several months, we have worked with our partners and our people to respond quickly and aggressively to the worst crisis our industry has experienced. The SkyWest team continues to demonstrate exceptional dedication and flexibility, and I want to thank them for their hard work and focus through this challenge. We are committed and remain laser-focused on ensuring we are positioned for the long-term, maintaining strong liquidity, and delivering on our partners’ objectives in the recovery.”

Financial Results
Revenue was $457 million in Q3 2020, down from $760 million in Q3 2019, due to the COVID-19 pandemic that caused a significant reduction in the number of scheduled flights SkyWest operated under its flying contracts compared to the same period last year. Total block hours in Q3 2020 were down 41% from Q3 2019.

SkyWest deferred recognizing revenue on $30 million of fixed monthly payments received during Q3 2020, down from $69 million of revenue that was deferred in Q2 2020. SkyWest will recognize the deferred revenue based on completed flights over the remaining contract term.

New Deals
SkyWest secured an agreement to place 20 used CRJ700s under a multi-year flying contract with American Airlines. SkyWest anticipates using its own aircraft not currently under contract with a partner to fulfill this agreement. The aircraft are expected to be placed into service ratably throughout 2021. Following the placement of these 20 aircraft, combined with anticipated placement of four CRJ700s in Q4 2020 and five CRJ700s in 2021 under a previously announced deal, SkyWest is scheduled to have a total of 90 CRJ700s under contract with American by the end of 2021.

SkyWest also secured agreements to acquire 21 used CRJ700s in a 50-seat configuration and lease the aircraft under a multi-year term to another regional airline operating for United Airlines. The aircraft purchases and leases are expected to be completed in Q4 2020.

Status Update on Previously Announced Deals
SkyWest is coordinating with its major airline partners to optimize the timing of upcoming fleet deliveries under previously announced deals in response to COVID-19 schedule reductions. The anticipated future delivery dates summarized below are based on currently available information and are subject to change.

Flying contract with American for E175 aircraft
Twenty new E175 aircraft to be financed and operated by SkyWest:

During Q3 2020, as previously announced, SkyWest and SkyWest Airlines entered into a $573 million, five-year secured loan facility with the U.S. Treasury Department (“Treasury”) under the Coronavirus Aid, Relief, and Economic Security Act (“CARES Act”). SkyWest Airlines borrowed the minimum required $60 million under the facility at closing. In October, SkyWest increased its loan capacity under this facility to $725 million. SkyWest Airlines has until March 2021 to borrow additional amounts under the facility. SkyWest issued warrants to purchase 211,416 shares of common stock to Treasury in conjunction with the initial $60 million draw.

As of September 30, 2020, SkyWest had a $75 million line of credit facility. SkyWest had approximately $35 million of letters of credit issued under the facility and $40 million available under the line at quarter-end.

SkyWest has elected to receive the funds in four disbursements. In consideration for the funding, SkyWest will issue to the U.S. Treasury Department warrants to purchase approximately 357,000 shares of SkyWest common stock.

The funds received under the Payroll Support Program will be used to pay for the wages, salaries and benefits of thousands of SkyWest Airlines employees. The Payroll Support Program includes certain restrictions, including limitations on involuntary terminations and furloughs through September 30, 2020, requirements to maintain certain levels of scheduled service, restrictions on the payment of dividends and the repurchase of shares through September 30, 2021, and certain limitations on executive compensation.

“We appreciate Congress and the Administration for quickly passing legislation to help support our people,” said SkyWest Chief Executive Officer Chip Childs. “These funds will cover important payroll expenses as we work together with our people to provide critical air service during this difficult time, and prepare for when demand returns.”

SkyWest, Inc. today announced an agreement with United Airlines to operate 25 Embraer E175 aircraft under a multi-year contract. These aircraft are scheduled to be placed into service ratably over a 12-month period beginning in the second quarter of 2020 through the first quarter of 2021. The aircraft are financed by United and are to be sourced from another United Express operator.

Commenting on the agreement, Chip Childs, Chief Executive Officer and President of SkyWest, said, “As their initial E175 launch partner, we are excited to become United’s largest E175 operator and the largest operator of the E175 aircraft in the United States. We are pleased to continue strengthening our United partnership through this new agreement.” 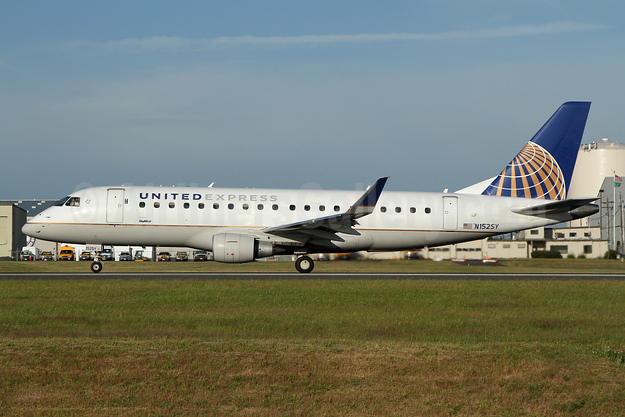 The route is operating with three roundtrips daily with Embraer 175 aircraft.

United will continue to serve PAE from its Denver hub.

Commenting on the results, Chip Childs, Chief Executive Officer and President of SkyWest, said “2020 represents the start of the next phase of our fleet transition as we increase new E175 aircraft and invest in our older CRJ fleet, driven by strong demand for both aircraft types. We expect this will make 2020 a pivot year to position us for a new trajectory in 2021 and 2022.”

Aircraft deliveries under previously announced deals for Delta Air Lines (“Delta”)New E175 aircraft to be financed and operated by SkyWest:

Upcoming new and used aircraft to be financed by Delta and operated by SkyWest:

In conjunction with new aircraft deliveries for Delta, SkyWest anticipates removing eight CRJ700 and four CRJ900 aircraft from its flying agreement with Delta by the end of 2020. Following the respective agreement expirations, SkyWest anticipates utilizing these 12 aircraft in various ways: placing them with other partners, using the airframes/engines as spares and/or leasing the airframes/engines to third parties.

Aircraft deliveries under a previously announced deal with AmericanSkyWest placed two of ten used CRJ700s with American during Q4 2019. SkyWest is scheduled to place the remaining eight CRJ700 aircraft with American throughout 2020. SkyWest anticipates acquiring five used CRJ700s from a third party and internally sourcing three CRJ700s through contract expirations.

Commenting on the results, Chip Childs, Chief Executive Officer and President of SkyWest, said, “We were pleased to deliver another solid quarter as we continue executing our fleet strategy and remain positioned for future opportunity based on strong demand for our product. I want to thank our SkyWest professionals for their excellent work during the quarter.”

Operational UpdateAircraft deliveries under previously announced deals for DeltaNew E175 aircraft to be financed and operated by SkyWest:

New CRJ900 aircraft to be financed by Delta and operated by SkyWest:

Used E175 aircraft financed by Delta and operated by SkyWest:

During Q3 2019, SkyWest acquired four CRJ900 aircraft under an early lease buyout. These four aircraft are scheduled to expire under SkyWest’s flying agreement with Delta in 2020.

SkyWest also anticipates removing eight CRJ700s from its flying agreement with Delta by the end of 2020. As previously announced, SkyWest has an agreement with Delta to replace these 12 used CRJ aircraft with 12 new aircraft. Following their agreement expirations, SkyWest anticipates utilizing these 12 used aircraft in various ways: placing them with other partners, using the airframe/engines as spare parts and/or leasing the airframes/engines to third parties.

Delta Air Lines has added a new destination to its route map with the start of three daily year-round flights from Salt Lake City International Airport hub to Santa Barbara Airport on August 12, 2019.

Santa Barbara is the 330th destination in Delta’s expanding network and the 13th city in California served by the airline. Combined with the start of other new routes – including Detroit-San Jose in November 2018, Atlanta-Ontario in April, Detroit-Sacramento in June, and Atlanta-Burbank in July – the number of seats Delta offers from California has grown by over five percent.

For Delta’s hub in Salt Lake City, Santa Barbara is the latest in a series of destinations that have been added in the last two years, including Cleveland, Ohio; Columbus, Ohio; Fort Lauderdale, Fla.; Milwaukee, Wis.; Pittsburgh, Penn.; and Tampa, Fla.

Salt Lake City-Santa Barbara service will be operated by Delta Connection carrier SkyWest on a 76-seat Embraer E175 aircraft with 12 seats in First Class, 20 seats in Delta Comfort+ and 44 seats in the Main Cabin.

Delta offers more than 280 departures to more than 90 destinations from its Salt Lake City hub. 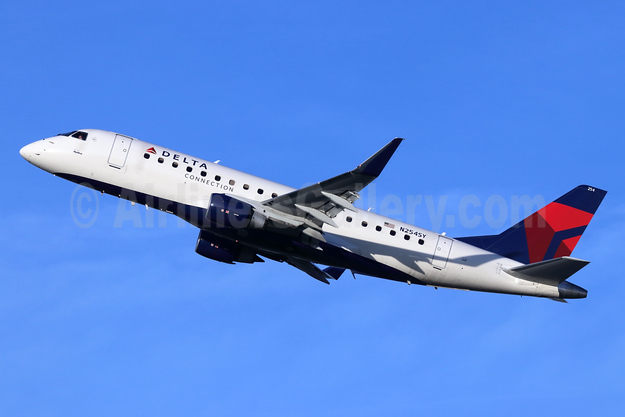 SkyWest, Inc. today announced an agreement with Delta Air Lines to operate six used Embraer 175 aircraft under a multi-year contract scheduled to begin in early 2020. The aircraft are financed by Delta and to be sourced from a regional operator transitioning out of Delta Connection (Compass Airlines).

SkyWest has also agreed to purchase and operate seven new E175 aircraft for Delta instead of SkyWest operating seven new CRJ900 aircraft that were to be financed by Delta and scheduled for delivery in 2020. The seven E175 aircraft have delivery dates scheduled from late 2019 to mid-2020.