Qatar Airways has announced that its ultramodern Airbus A350-1000, equipped with the airline’s luxurious, award-winning Qsuite, will be available on flights to and from Dallas/Fort Worth International Airport (DFW) starting July 1, 2019. Dallas will be the second U.S. gateway to feature this revolutionary aircraft.

The world’s most technologically advanced passenger aircraft will also commence service on Qatar Airways’ second JFK route, which currently operates an A350-900, starting March 31, 2019. The award-winning airline first launched the A350-1000 on its New York to Doha route on October 28, 2018, marking the historic entry of the A350-1000 aircraft on U.S. routes.

One of the latest additions to the Airbus family of twin-aisle, widebody jetliners, the A350-1000 offers 327 seats across two cabins – 46 Qsuite Business Class seats and 281 extra-wide 18-inch seats in Economy Class. Similar to the A350-900 – for which Qatar Airways was also the global launch customer – the high-performance A350-1000 boasts an advanced airframe with extensive use of composite materials. Coupled with a fuselage innovatively built with carbon-fiber reinforced plastic, the jetliner burns lesser fuel, reducing harmful effects to the environment. On the inside, LED mood lighting mimics a natural sunrise and sunset to help reduce the effects of jet lag.

Qatar Airways’ A350-1000 features the airline’s patented, award-winning Business Class experience, Qsuite, which offers the industry’s first-ever double bed in Business Class, as well as privacy panels that stow away, allowing passengers in adjoining seats to create their own private room, a first of its kind in the industry. Qsuite is currently available on flights to and from JFK, as well as Washington, D.C., Chicago, Houston, with upcoming launches in Dallas and Los Angeles. 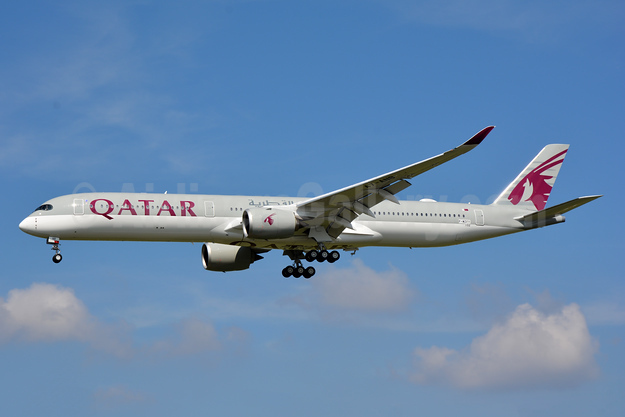 Qatar Airways will assign the new Airbus A350-1000 to the Doha (below) – New York (JFK) route starting on October 28, 2018, The route will operate daily according to Airline Route replacing the current Boeing 777-300ER aircraft.