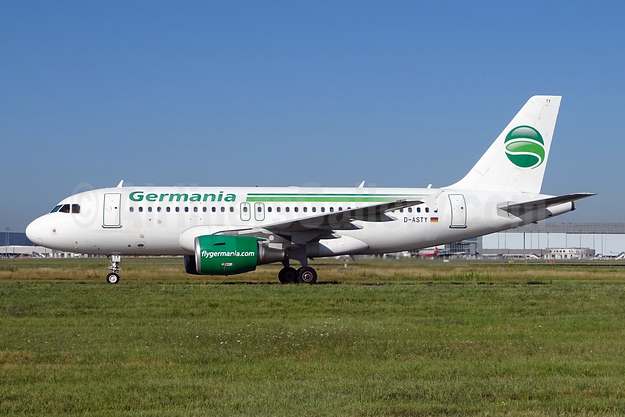 Germania has finalized its flight schedule for the coming summer and will be launching numerous new connections.

In the summer of 2019, the airline’s green and white aircraft will be flying for the first time from Berlin-Tegel to the Greek island of Mykonos, from Bremen to the Croatian coastal city of Zadar and from Munich to Varna in Bulgaria.

From Berlin-Tegel to the world

Germania will introduce six new routes departing from Berlin-Tegel airport in summer 2019. The Turkish coastal city of Antalya, Sharm el-Sheik in Egypt, Varna on the Gold Coast of Bulgaria and the popular holiday islands of Djerba, Ibiza and Mykonos are fresh additions to Germania’s summer flight schedule. Already existing connections, for example to the Israeli city of Tel Aviv or to Fuerteventura, will be offered next year as well. In total, Germania will operate 24 routes from Berlin-Tegel during the warmer months, as well as eleven from Berlin-Schönefeld.

Germania will launch four new connections from Bremen next summer. There will be one flight per week to Larnaca in Cyprus and two weekly services to Corsica, Ibiza and Zadar. Established destinations like Mallorca, Antalya and Reykjavík/Keflavik will also remain on the schedule for next year. In total, Germania’s summer flight schedule for 2019 will give guests from Bremen and the surrounding region the choice of 23 destinations.

For Munster/Osnabruck, Germania’s summer flight schedule for 2019 includes 20 destinations, three of them new: there will be two weekly flights to the Balearic island of Ibiza and one each to the Cypriot city of Larnaca and to Zonguldak in Turkey. Also listed on the schedule are connections to Faro in Portugal and to the Greek islands of Rhodes, Crete and Kos.

Germania will also fly to Larnaca from Dresden in the coming season and is bringing back the service to Dalaman in Turkey. A connection to Turkey will also be returning to the schedule in Nuremberg; furthermore, the green-and-white aircraft will fly from there to Adana after a break of one year. New on Germania’s summer flight schedule for the central Franconian airport is Bodrum, with one weekly service whisking guests from Nuremberg and the surrounding region off to the Aegean.

Another Turkish destination will be serviced from Hamburg in the coming summer. Starting in June, guests will be able to travel to Elazığ from the Hanse city. Germania is also launching weekly connections from the Lake Constance airport of Friedrichshafen to Olbia in Sardinia and to Ibiza in 2019. In Munich, Germania flights to Djerba and Varna will take place for the first time. Last but not least, Germania will start services from Dusseldorf and Zurich to the Albanian capital of Tirana.

Together with Bulgarian Eagle and the Swiss airline Germania Flug AG, Germania operates a fleet of currently 37 aircraft.