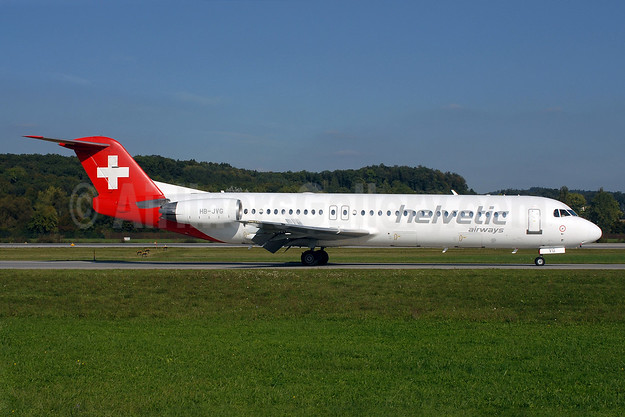 Helvetic Airways has announced the sale of its remaining fleet of Fokker 100 aircraft and the entirety of Helvetic’s spare engines, spare parts and tooling to Alliance Aviation Services Limited, of Australia, the world’s largest operator of Fokker aircraft.

Following the negotiations conducted in recent weeks, the conclusion of the sale puts a final end to the phasing-out project of the Fokker fleet of the Swiss company.

From this autumn onwards, these will be supplemented by the first of twelve new Embraer E190-E2s.

As previously reported, the airline operated its last Fokker 100 revenue flight on June 14, 2019 with HB-JVG.

Helvetic Airways made this announcement:

After more than 15 years of service with the type, Helvetic Airways officially withdrew its last Fokker 100 on June 14. Just prior to its withdrawal, aircraft HB-JVG performed an exclusive scenic flight around Switzerland before making its final landing at Zurich Airport in Helvetic service.

On landing, the aircraft was also treated to a water salute by the airport fire service.