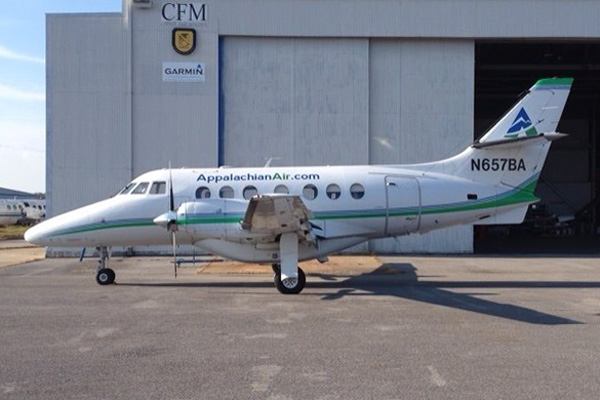 Appalachian Air (Pikeville, Kentucky) hoping to find a niche in a small market in eastern Kentucky has decided to cease operations next month. The carrier, which commenced operations on October 27, 2014, issued this statement:

Service to End in July

The companies providing air service to the Pikeville – Pike County Regional Airport (PBX) – Corporate Flight Management, dba Appalachian Air, and Public Charters, Inc. – informed the community that they will end service to PBX in July (the final date of service to be announced soon).

Appalachian Air started service between PBX and Nashville International Airport on October 27, 2014, the first such air service to Eastern Kentucky. In spite of nearly 100% operational reliability for all flights which were scheduled to operate, and, aggressive promotional pricing (in essence, a 50% discount on most tickets during this period), the service was never able to build to a sustainable level.

“The failure of Appalachian Air to gain traction in the marketplace is yet another result of President Obama’s “War on Coal,” said Luke B. Schmidt, President, L.B. Schmidt & Associates, LLC, the consultant who has been working to recruit and implement the new service with the City of Pikeville, the Pikeville – Pike County Airport Board and the Southeast Kentucky Chamber of Commerce.

“Appalachian Air provided superior service to PBX and never cancelled a flight due to aircraft availability or mechanical issues, and, only had two weather-related cancellations. However, during the run up to the service launch in 2014 and continuing into 2015, the region lost nearly 12,000 high-paying coal mining jobs, which has had a huge impact up and down the line in the local economy,” Schmidt continued.

The service was supported with minimum revenue guarantee (MRG) payments which were designed to serve as a bridge to get the new service to a sustainable position. The funds for the MRG were provided through federal and state grants. The parties recognized the inability to develop the service to a sustainable level and elected to take the fiscally responsible step of discontinuing the service, which will allow any unused funds to be returned to the grant providers.

“This service was strongly supported by the business community, the local state legislative delegation, the Governor, and Members of Kentucky’s congressional delegation. However, the decline in the economy made it very difficult to get enough passengers on board to get to a sustainable, or even break even position. I know that I speak for all of our project partners in expressing our appreciation for this support,” said Schmidt.

Passengers who have booked flights on Appalachian Air for July or later will be contacted directly by Public Charters, Inc. concerning their tickets.