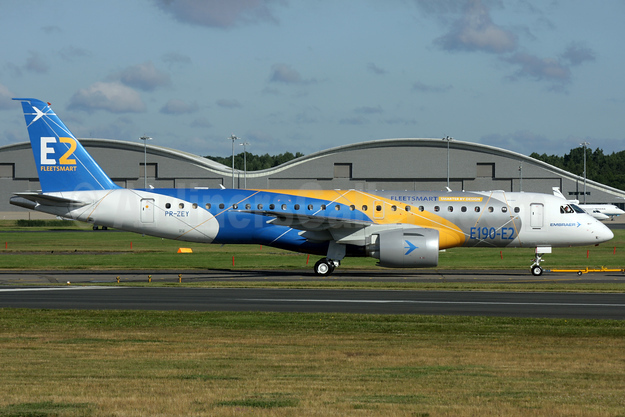 In a ceremony held on February 28, 2018 at the Company’s facilities in São José dos Campos, Embraer received Type Certificate for the E190-E2, the first member of the E-Jets E2 family of commercial aircraft, from the Brazilian Civil Aviation Agency (Agência Nacional de Aviação Civil – ANAC), the FAA (Federal Aviation Administration) and EASA (European Aviation Safety Agency). It is the first time that an aircraft program with the level of complexity of the E2 receives a type certificate from three major worldwide certification authorities simultaneously.

It took just 56 months from program launch until the E190-E2 was certified. The E190-E2 features new ultra-high bypass ratio engines and a completely new wing and landing gear. Compared to the first-generation E190, 75% of the aircraft systems are new.

The flight test program comprised four prototype aircraft which were subjected to rigorous testing. The E190-E2 test fleet completed over 2,000 flight hours. Some 45,000 hours of tests were conducted in laboratories with rigs for aircraft avionics, flight controls, and electrical, hydraulic, and environmental systems.

Widerøe, the largest regional airline in Scandinavia, is the first airline in the world to receive the brand-new E190-E2 and will put the aircraft in revenue service in April. The airline has a contract for up to 15 E2 family jets consisting of three firm orders for the E190-E2 and purchase rights for 12 further E2 family aircraft.

Embraer recently announced some final flight test results confirming the E2 as the most efficient single-aisle aircraft on the market. In fuel consumption, the E190-E2 proved to be 1.3% better than originally expected, a 17.3% improvement compared to the current- generation E190.

The E190-E2 also becomes the most environmentally friendly aircraft in its class, with the lowest levels of external noise and emissions. Flight test results also confirmed the E190-E2 to be better than its original specification in takeoff performance. The aircraft’s range from airports with hot-and-high conditions, such as Denver and Mexico City, increases by 600 nm compared to current-generation aircraft. Its range from airports with short runways, such as London City, also increases by more than 1,000 nm allowing the aircraft to reach destinations like Moscow and cities in the north of Africa.

The E190-E2 will also have the longest maintenance intervals among single-aisle aircraft with 10,000 flight hours for basic checks and no calendar limit for typical utilization. This means an additional 15 days of aircraft utilization over ten years compared to current generation E-Jets. Another key gain is with pilot transition training time. Pilots of current-generation E-Jets will need only 2.5 days of training and no full flight simulator to be qualified to fly an E2.

Embraer is the world’s leading manufacturer of commercial jets up to 150 seats. The Company has 100 customers from all over the world operating the ERJ and E-Jet families of aircraft. For the E-Jets program alone, Embraer has logged more than 1,800 orders and 1,400 deliveries, redefining the traditional concept of regional aircraft by operating across a range of business applications.