Frontier Airlines, no stranger to change and restructuring, is on the cusp of another major move. A move will not only impact themselves, but the industry as a whole. Bryan Bedford, CEO of parent Republic Airways, made it recently clear they are shopping for a potential buyer for the airline. “If a binding sales agreement is reached … we currently would expect such a closing to occur late in the third quarter,” Bedford reiterated this on a recent conference call, according to Reuters. Republic Airways has been shopping for a buyer since 2011; however it looks as if a serious potential suitor has been lined up.

As reported by World Airline News and others, Indigo Partners have been interested in buying the Denver-based airline and Bedford made it clear an announcement may be coming any day now.  “While both Indigo Partners and Republic Airways have declined to comment on the matter, Republic reportedly told investors in an earnings call in July that it expected to sell Frontier to an unnamed purchaser by September”, according to this report by ibtimes.com. There has been no shortage of speculation on this potential acquisition, and with another ultra-low cost carrier in the mix, what impact does this have on the domestic airline industry?

Frontier currently offers many levels of tickets based upon what the customer wants, they offer the Classic Plus, Classic, Economy, and the newly introduced Basic ticket. The Basic ticket is any ticket purchased outside of the FlyFrontier.com website. I look for this model to continue, as most customers like the flexibility that the Classic and Classic Plus ticket offer. But, look for the price variances between the four tickets to increase, offering the flexibility to choose a higher priced ticket to include bag fees, and reservation changes. Basic and Economy tickets will offer a lower priced ticket, accompanied with the option for consumers to pay a la carte for extras.

The biggest question for a restructured Frontier Airlines; what does the route map look like in the months, and years ahead, and what is Denver’s role in the transition? I foresee Frontier slowly moving away from the intense competition in Denver and adopting a route map similar to that of Allegiant Air. Serving cities with less competition and attracting the leisure traveler to vacation destinations in places like Orlando (MCO), Las Vegas, Cancun, and Punta Cana. I expect a large presence to remain in Denver; however I do not expect Denver to act as a hub with less focus on connecting traffic and an increased focus on point to point traffic.  In summary, Frontier will be slowly ‘de-hubbing’ Denver while looking for a route strategy that works well with a changing business model. 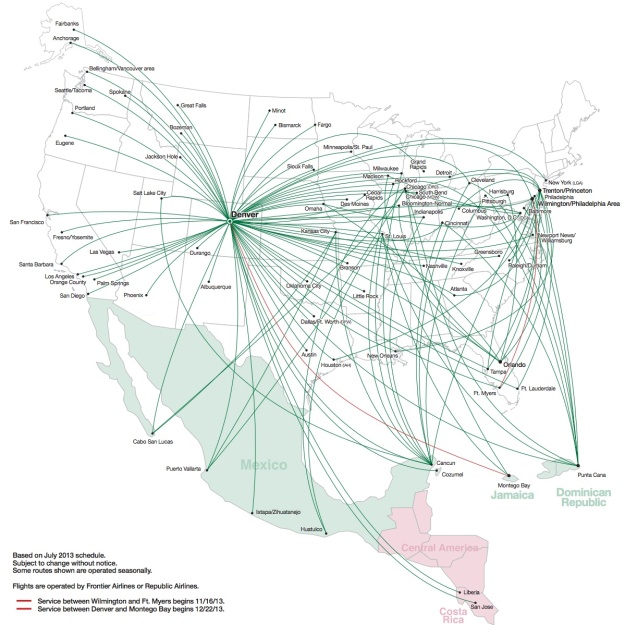 The competition in Denver from a growing presence by Southwest Airlines and legacy carrier United Airlines has caused Frontier to experiment with cities like Trenton, NJ and Wilmington, DE. Frontier has created focus cities with large surrounding populations with no commercial service prior to Frontier’s entry into the market. I’m looking for Frontier to explore more cities like these; taking a page from Allegiant’s playbook by offering fewer frequencies to ensure high load factors while taking advantage of low airport costs. These airports often offer financial incentive packages minimizing risk, while testing new markets. This may cause Frontier to enter and exit markets quicker than most airlines would; look at recent announcements from South Bend, IN and Rockford, IL.

Frontier’s recent announcement of their exit from Albuquerque, NM in January is a microcosm of their flee from direct large carrier competition. With service from WN and UA, Frontier could no longer compete with Southwest and United on a lower profile route like ABQ-DEN. Contrast that decision with their recent move to increase service to Eugene, OR, Fresno, CA, and Palm Springs, CA.  Frontier will begin looking for more cities similar to these where legacy service is limited, leisure travel is in demand and airport costs are at a minimum.

Impact on the Industry

The airlines most affected by this move are United, Southwest and Spirit. The winners in this move are United Airlines and Southwest Airlines. As Frontier begins to move operations away from Denver, competition on several routes will decrease, and fares will potential increase. United and Southwest will continue to grab the largest share of the local Denver market while Frontier will potentially escape to capture underserved markets for leisure travelers.

Spirit Airlines will be the most affected by this move as it will not only have another competitor in the ultra low cost market, but it will lose William Franke and Indigo’s expertise to Frontier. Spirit announced an 8.5% profit margin in the quarterly earnings ending in June, and shares of Spirit have nearly tripled since the company’s IPO in 2011. Indigo and CEO William Franke has been successful with Tiger Airways, Volaris, Wizz Air and most notably Spirit Airlines.  Frontier’s move to an all Airbus A319 and A320 fleet, service to new under-utilized markets and new focus on increased ancillary revenues has some industry insiders speculating a Spirit–Frontier merger on the horizon.  What do you think? What does a “new” Frontier Airlines look like in the months and years ahead?

Aaron is a relatively new AvGeek who obtained an appetite for the industry in college while flying in and out of LAX observing the diverse liveries, and large bodied planes. Aaron studied International Business in college and found himself writing the majority of his case studies and papers on the airline business. He currently works in the oil industry and maintains a part-time job as a Customer Service Agent to satisfy his passion for planes, airlines and traveling. You can leave a comment, or you can contact Aaron directly at aaronnewman34@gmail.com.