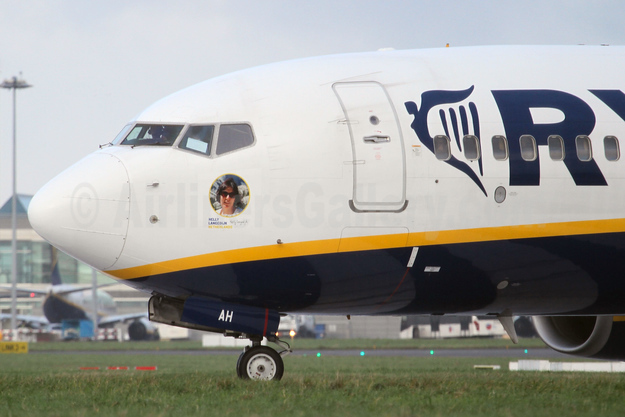 Ryanair (Dublin) on January 7 announced it will open a new base at Belfast International Airport, starting in March, with one based aircraft and a four daily flights to London (Gatwick). The base will grow to three aircraft and five more new routes from October 2016. Belfast is the 77th base for the ultra low-fare carrier.

Copyright Photo: Michael Kelly/AirlinersGallery.com. Ryanair has initiated a campaign “honoring” some of their passengers by displaying their image on some aircraft. In this image, passenger ” Nelly Langedijk ” from the Netherlands is featured on the nose of Boeing 737-8AS EI-DAH (msn 33546) pictured at the Dublin base.

Ryanair issued this statement on the “30 Names 30 Planes” program:

“On July 8, 2015 to celebrate its new Facebook account and 30th birthday, Ryanair launched a ’30 Names 30 Planes’ competition, offering 30 fans the chance to have their name and face pictured on one of 30 Ryanair aircraft. Entry was through the Ryanair Facebook page, where fans uploaded their photo and downloaded a CGI video of their own Ryanair aircraft bearing their name and face. After over 80,000 entries the 30 lucky winners were announced in October 2015.”

According to Ryanair, the first decals were fitted in the first week of December 2015 and the decals will be fitted for up to six months.

1 thought on “Ryanair to open its 77th base at Belfast International, starts “honoring” some of its passengers”