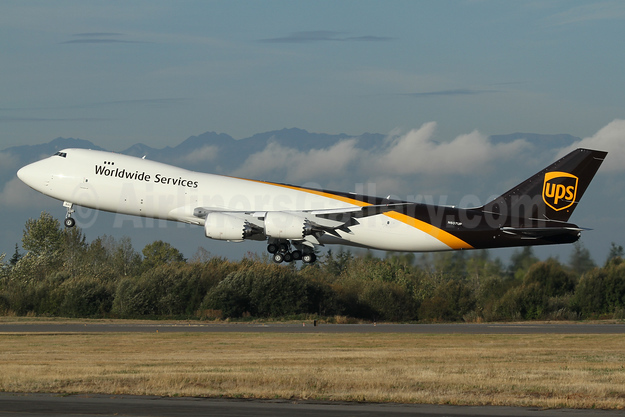 The pictured N607UP completed its first flight on October 6, 2017. The new freighter became airborne in about 3,500 feet at Paine Field near Everett, WA.

In October 2016 Boeing announced an order for 14 747-8 Freighters for UPS. The agreement also includes an option to purchase an additional 14 of the cargo airplanes.

The 747-8s will enable UPS to begin a cascade of aircraft route reassignments that will add significant air capacity to the company’s busiest lanes, thereby optimizing global air network capacity well beyond the impact of adding new cargo jets.

In addition, the 747-8 offers training and operating efficiencies to UPS. Pilots of the company’s existing 747-400 fleet will enjoy a common equipment rating, allowing them to fly both aircraft types. Further, UPS will realize greater economies of scale in maintenance and ground handling by operating the -8 aircraft.

N605UP arrived at the Louisville (SDF) base and is currently operating crew proving flights around SDF. It will enter revenue service later this month.

The 747 fleet usually operate from SDF to Anchorage, Alaska for refueling, and then on to its hubs in Asia.