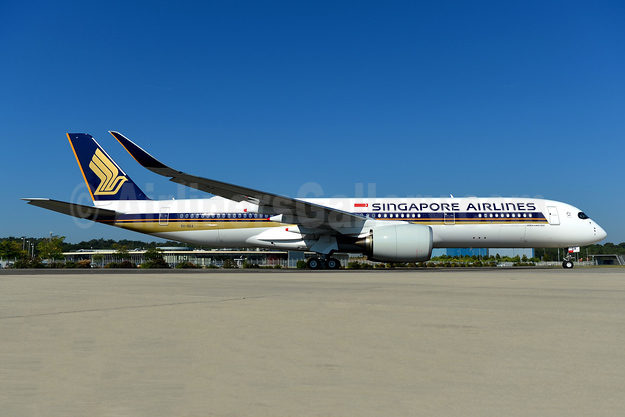 The latest variant of the best-selling A350 XWB is capable of flying further in commercial service than any other aircraft, with a range of up to 9,700 nautical miles, or over 20 hours nonstop.

SIA will begin operating the A350-900 ULR on October 11, 2018, when it will launch nonstop services between Singapore and Newark. With an average flying time of 18 hours and 45 minutes, these will be the world’s longest commercial flights. Following New York, the aircraft will enter service with SIA on two more non-stop transpacific routes, to Los Angeles and San Francisco.

The A350-900 ULR is a development of the A350-900. The main change over the standard aircraft is a modified fuel system, enabling the fuel carrying capacity to be increased by 24,000 litres to 165,000 litres. This extends the range of the aircraft without the need for additional fuel tanks. In addition, the aircraft features a number of aerodynamic enhancements, including extended winglets, which are now being applied to all in-production A350-900 aircraft.

The A350 XWB is the newest and most modern widebody aircraft family, incorporating  the latest aerodynamic design, carbon fibre fuselage and wings, plus new fuel-efficient Rolls-Royce engines. Together, these latest technologies translate into unrivalled levels of operational efficiency, with a 25 per cent reduction in fuel consumption and emissions, and significantly lower maintenance costs.

As at the end of August 2018, Airbus had recorded a total of 890 firm orders for the A350 XWB from 46 customers worldwide, already making it one of the most successful widebody aircraft ever. Almost 200 A350 XWB aircraft have already been delivered and are in service with 21 airlines, flying primarily on long range services.

Singapore Airlines is one of the largest customers for the A350 XWB Family, having ordered a total of 67 A350-900s, including the seven Ultra Long Range models. Including today’s delivery, the airline’s A350 XWB fleet now stands at 22 aircraft.

Singapore Airlines (SIA) on September 22 took delivery of the world’s first Airbus A350-900 ULR (ultra long range) aircraft from Airbus. It is the first of seven A350-900 ULRs on firm order and will enter service on October 11, 2018 – operating the world’s longest commercial flight between Singapore and Newark Liberty International Airport.

SIA is the launch customer for the new A350-900 ULR, which is capable of flying up to 9,700 nautical miles (nm), or over 20 hours nonstop. The flight to Newark will cover a distance of approximately 9,000 nm (16,700 km), with traveling time of up to 18 hours 45 minutes. The aircraft is configured in a two-class layout, with 67 Business Class seats and 94 Premium Economy Class seats.

The A350-900ULR is designed for a more comfortable travelling experience with features such as higher ceilings, larger windows, an extra wide body, quieter cabins and lighting designed to reduce jetlag. Its carbon composite airframe also allows for improved air quality due to a more optimised cabin altitude and humidity levels.

The first two A350-900 ULRs will be used for the launch of Singapore-Newark services while subsequent aircraft will be used for Singapore-Los Angeles services commencing on November 2, 2018, as well as to increase frequency on the existing Singapore-San Francisco route. By the end of 2018, SIA will link Singapore and the United States with 27 weekly nonstop flights.

With the delivery of the first A350-900 ULR, Singapore Airlines now has 22 A350-900 aircraft in its fleet, with 45 more on order including the six additional ULR variants.

Singapore Airlines currently operates 40 flights per week to the US cities of Houston, Newark, Los Angeles and San Francisco. With the new ULR flights, total US flight frequency will increase to 53 per week by December.

As previously announced, Singapore Airlines (SIA) and Canyon Ranch, the world’s premiere integrative wellness brand, have forged a partnership to re-invent ultra-long-haul travel with a focus on wellness cuisines, rest and relaxation, and general well-being on the world’s longest flights.

“SIA is firmly committed to continually elevating our customers’ experience to be the number one in the industry. Our new partnership with Canyon Ranch builds on that commitment, as well as our strong legacy of service, tapping into their deep expertise and science-based recommendations and strategies to deliver an even more comfortable journey for our customers,” said Singapore Airlines Acting Senior Vice President Customer Experience, Mr Yeoh Phee Teik.

The partnership focuses on the following components:

“As a trailblazer in integrative wellness for four decades, collaborating with the world’s most awarded airline that has ushered customers globally for more than 70 years, our affiliation is testimony to heritage brands that continue to innovate. We are fortunate to provide transformative wellness to guests on land, at sea and now – in the air, with a partner that is equally committed to their guests’ experience as we are,” said CEO of Canyon Ranch, Ms. Susan E. Docherty.