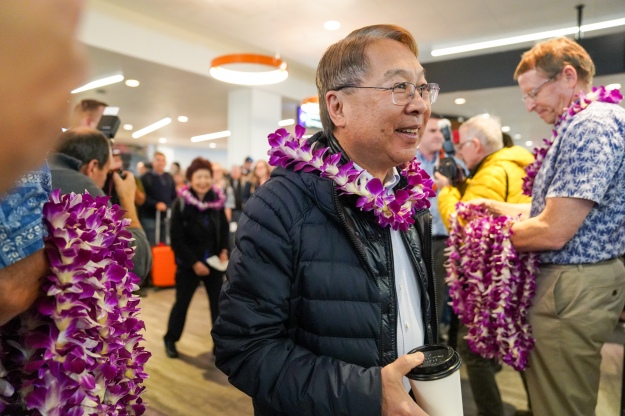 Hawaiian Airlines Flight 90 flew into aviation history on April 5, inaugurating the nation’s longest interstate route when it left Honolulu’s Daniel K. Inouye International Airport (HNL) on April 4 and touched down at Boston Logan International Airport (BOS) on the morning of April 5, bringing with it a five-times-a-week dose of aloha to New England.

Prior to this flight, Boston was the largest U.S. market without nonstop service to Hawai‘i with some 250 people flying between eastern New England and the islands each way on any given day. Boston’s renowned educational and medical facilities are among the many attractions drawing Hawai‘i travelers to the Bay State. The route generated about $79 million in ticket sales last year.

A celebration of Hawaiian Airlines inaugural flight from Honolulu to Boston on 4/5/2019.

In addition to vacations, the route opens economic and cultural opportunities. The seafood industry, important in both states, will benefit. On board Flight HA89 as it departed Boston for Hawai‘i: nearly one-and-a-half tons of live lobster. Hawaiian fish and produce will also be regularly flown to New England.

At 5,095 miles, Hawaiian’s HNL-BOS route is the longest regularly scheduled interstate route in U.S. history. It will take nearly 10 hours traveling to Boston from Honolulu, and roughly 11.5 hours traveling from Boston in the morning and arriving in Honolulu in the afternoon. When the ship Thaddeus sailed from Boston to Hawai’i in 1819, it took the missionaries who were onboard 164 days to reach the islands.

Last year, about 127,000 people from New England – more than half of them from Massachusetts — visited Hawai’i, according to the Hawai‘i Tourism Authority.