WestJet and the Calgary Stampeders have set into a motion a proposed three-year partnership between the two Calgary-based companies. 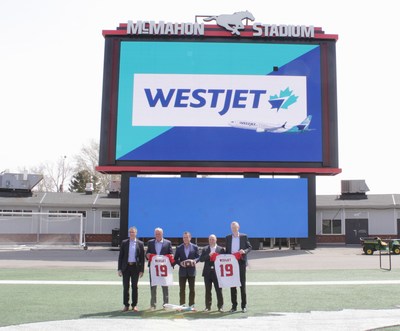 As part of the proposed agreement, WestJet will become the official airline partner for the Stampeders and will charter the defending 2018 Grey Cup Champions to all away games through the 2021 season across Canada.

“The Calgary Stampeders have a deep history within our local community and as Calgary’s hometown airline we’re extremely proud to kick-off our partnership with this championship organization,” said Richard Bartrem, WestJet Vice-President Marketing Communications. “As new teammates, we look forward to supporting the Stampeders in their title defense and sharing in each other’s successes in the air and on the playing field across Canada for the next three seasons.”

“The Calgary Stampeder Football Club is very excited about this partnership between two proud Calgary institutions and we’re very much looking forward to teaming up with WestJet for the next three years,” said Stampeders Senior Director of Business Operations Mike Franco. “It’s an ideal union and we’re extremely pleased that a major international brand with strong local roots is meeting our team travel needs.”

The three-year deal is expected to include a WestJet branded on-field logo at McMahon Stadium and advertising, along with in-game promotional opportunities and co-branded content features of the team throughout the season.

The Calgary Stampeders are set to open the 2019 season on Saturday, June 15 at McMahon Stadium against Ottawa in a Grey Cup rematch. Fans hoping to catch pre-season action are encouraged to attend the team’s only pre-season contest on Friday, May 31 against Saskatchewan in Calgary.

WestJet is Calgary’s largest airline, and by June 2019, will offer flights to 68 non-stop destinations with over 1,000 flights per week from YYC. More Calgarians choose WestJet for their air travel than any other airline.