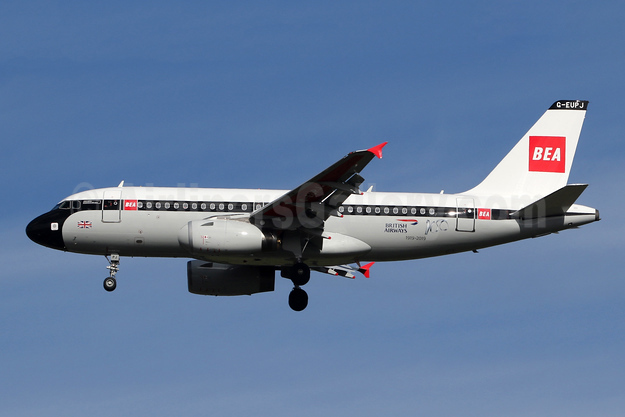 Jersey residents will step back in time when British Airways celebrates 100 years of flying with a nostalgic entry in this year’s International Air Display on September 12.

One of the airline’s heritage aircraft, an Airbus A319 in the former British European Airways (BEA) livery, will take part in the flypast, one of the highlights of the Jersey show which attracts more than 25,000 visitors.

The A319, registration G-EUPJ, has been painted to mark British Airways’ centenary and is one of a collection of four heritage aircraft with vintage livery.

BEA flew predominantly on domestic and European routes between 1959 and 1968. However, there is one significant difference with the replica; the aircraft has a grey upper wing, rather than the traditional red, to meet current wing paint reflectivity requirements.

The historic lookback during the air show will continue on the ground where British Airways’ ambassadors in various heritage uniforms will welcome visitors to the show. There will be a special Club Europe fare on offer and a chance to win flights from Jersey to Milan, a new destination from London Gatwick this year.

British Airways operates a year-round service to Gatwick from Jersey, with 34 departures a week.

The airline has a long association with Jersey which began in 1933 when Jersey Airways, a forerunner of BEA and British Airways, launched its new route from Portsmouth. Until Jersey Airport opened in March 1937, the aircraft arriving on the island landed on the beach at St Aubin’s Bay.