Guyana becomes the fourth country in South America JetBlue serves and grows the airline’s presence in the Caribbean and Latin America to nearly 40 destinations. The new nonstop flights between New York City and Georgetown will be made possible by the A321neo’s extended range and fuel efficiency. 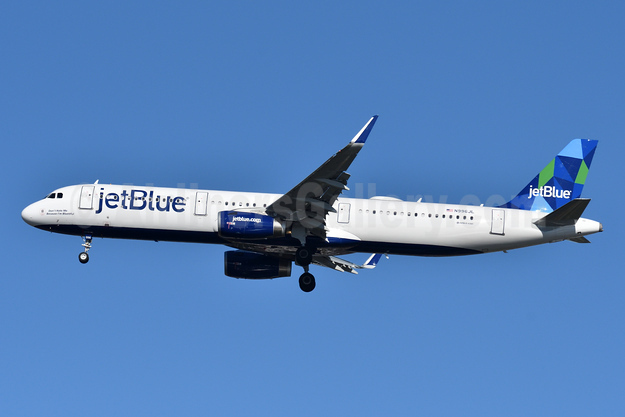 JetBlue A321neo aircraft feature the Collins Meridian seat – which is the widest seat available for the single aisle Airbus family of aircraft – with enhanced cushion comfort, adjustable headrests, power connections at every seat and the most legroom in coach (a). Inflight entertainment is powered by Thales AVANT and ViaSat-2 connectivity. With this system – featuring 10.1 inch, 1080P high definition screens, more than 100 channels of live television with DVR-like pause and rewind functionality, picture-in-picture function and more – JetBlue offers customers expanded entertainment choices in nearly every region the airline flies (b).

The A321neo – the newest aircraft type to join JetBlue’s growing fleet of more than 250 aircraft – boasts a 20% increase in fuel efficiency which supports some 500 nautical miles of extended range. The longer-range flying capabilities of the A321neo open up a host of new markets which JetBlue’s existing fleet could not serve with nonstop flights. Each JetBlue Airbus A321neo is powered by two Pratt & Whitney GTF engines, which produce a smaller noise footprint and lower operating costs.

JetBlue initially announced the new route between New York City and Georgetown in September 2019, but temporarily paused the sale of seats and adjusted the launch schedule in response to changes in global travel demand.