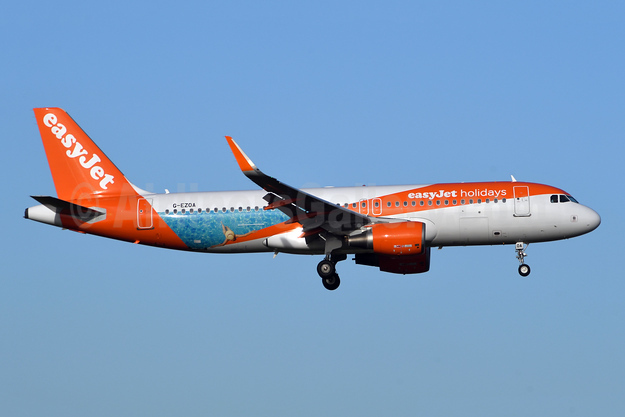 easyJet has operated a disciplined flying program over the winter months whilst continuing to deliver a major restructuring and cost reduction program.  As a result, easyJet expects a first half headline loss before tax in the range of £690 to £730 million, which is slightly better than expectations.  The effects of the cost-out program will support improved margins and reduce seasonality for the future.  Our capacity forecasting has been accurate and disciplined throughout the pandemic, which has allowed for strong cost control.  Our focus on cash generative flying over the winter season has minimized cash burn, with cash burn in the second quarter better than guidance.

As at 31 March 2021 easyJet has unrestricted access to c.£2.9 billion of liquidity having raised over £5.5 billion since the beginning of the pandemic1, and is well positioned to capitalize on the recovery of travel once restrictions are eased across the network.

easyJet has maintained a high level of operational flexibility to respond to rapidly-changing travel restrictions.  We will continue to operate a reduced schedule throughout much of Q3 but are ready to ramp up our operations to match the level of demand we see in the market.

“ easyJet has maintained a disciplined approach to flying during the first half of our financial year, resulting in a first half loss and cash burn better than expectations.  We continue to have access to significant levels of liquidity alongside easyJet’s major cost-out program which continues to deliver ongoing cost and efficiency benefits.  All of this positions us well to lead the recovery.

“We welcome the confirmation by the UK Government that international travel is on track to reopen as planned in mid-May.  easyJet was founded to make travel accessible for all and so we continue to engage with Government to ensure that the cost of the required testing is driven down so that it doesn’t risk turning back the clock and make travel too costly for some.

“We continue to closely monitor the situation across Europe and with vaccination programs accelerating, most countries are planning to resume flying at scale in May.  We have the operational flexibility to rapidly increase flying and add destinations to match demand.  easyJet is ready to resume flying, prepared for the ramp up and looking forward to being able to reunite people with their families or take them on leisure and business flights once again.  As a result, we remain well-positioned for the recovery this summer and beyond.”

Group headline costs excluding fuel for the first half decreased by c.59% to c.£845 million, driven by a decrease in capacity flown and the material savings achieved across many areas of the business from easyJet’s major cost-out program.  easyJet maintained a disciplined approach to capacity and cash management and as a result, total cash burn during the second quarter was c.£470 million, which is better than previous guidance.

The structural cost-out program we announced last year, easyJet’s largest ever, is on track to achieve our targeted cost savings and will position easyJet well to lead the recovery in aviation.

During the first half easyJet flew 14% of H1 2019 capacity, in line with our expectations.  Our capacity forecasting has been accurate and disciplined throughout the pandemic, which has helped deliver strong cost control.

easyJet remains disciplined in focussing on profitable flying.  Our operations, financial and commercial teams are running dynamic schedule updates, on a regular basis, in order to capitalize on all available demand.  We retain significant operational flexibility to enable us to capture pent-up demand and are able to ramp up flying quickly when demand returns.

easyJet’s market-leading flexible customer policies are driving trust and confidence to book.  We are offering more flexibility than ever before.  Our Protection Promise for both flights and holidays means that customers can book now with the confidence that if their plans change, so can their booking.

Ancillary revenues represent a significant opportunity for easyJet to increase revenue per seat and margins in the coming years.

In January easyJet launched a new fare class called Standard Plus, which is performing well.  Our new cabin bag policy came into effect in February and early indications show that this is also on track relative to our revenue expectations, as well as having a positive effect on our On Time Performance metrics.  The ability to bring a large overhead cabin bag on board is now bundled with Up front and Extra legroom seating.  The seating and bag packages are actively yield managed and dynamically priced from £7.99.

easyJet has taken swift and decisive action successfully raising over £5.5 billion in liquidity since the beginning of the pandemic1, from a diversified range of funding sources.

In March easyJet’s subsidiary easyJet FinCo B.V. issued a €1.2 billion bond under our Euro Medium Term Note (EMTN) program.  The bond matures in March 2028 and has a coupon of 1.875%.  There was good market appetite for the bond, which was heavily oversubscribed.  easyJet continues to maintain access to a diverse range of funding sources and continues to review its debt maturity profile.

As at 31 March 2021 easyJet has unrestricted access to c.£2.9 billion of liquidity, comprising cash and cash equivalents, money market funds, money market deposits plus the undrawn portion of the UKEF facility.  The first £300 million tranche of easyJet’s borrowings from the CCFF was repaid in March 2021 and the remaining £300 million is due in November 2021.  easyJet has no other debt maturities outstanding until FY 2023.

Due to the sustained lower capacity expected for several months ahead, easyJet has continued to see hedge ratios moving over 100% from both a jet fuel and FX perspective.  To mitigate the effects of this, easyJet has taken action to close out over-hedge positions, to mitigate its exposure to volatility in the fair value of discontinued hedges.  easyJet continues to hedge contractual exposures (such as leases and capex) and has decreased the amount of operational hedging that is taken out for future periods until there is greater clarity around exposures.

Non-headline items for the six months ending 31 March 2021 are expected to reflect a net c.£55 million credit.  This is comprised principally of gains related to sale and leaseback transactions, with a net charge related to fuel hedge discontinuation being largely offset by a release of restructuring provisions.  The release of restructuring provisions is based on current expectations of our latest discussions with unions, on which we will provide a further update at the half year results.  This will be subject to review by our auditors.

The group reported loss before tax is expected to reflect the positive impact of the non-headline items discussed above.

At this stage, given the continued level of short-term uncertainty, it would not be appropriate to provide any further financial guidance for the 2021 financial year.  Customers are booking closer to departure and visibility remains limited.