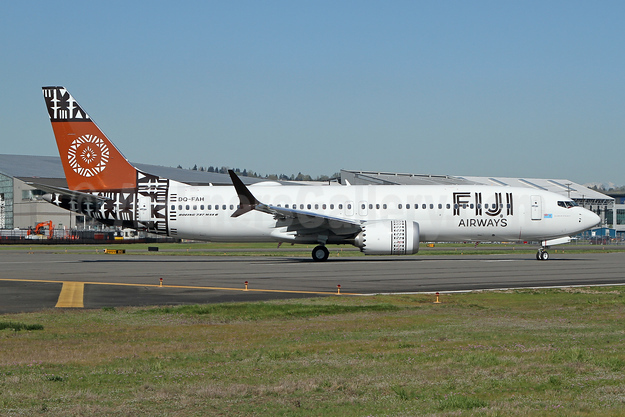 The deal for the five Boeing 737 MAX aircraft was announced on November 23,  2016 by Fiji Airways, Boeing and GECAS (the lessor). The acquisition process was explained in detail at the time, together with details about the groundbreaking acquisition deal; that it was a 12-year Sale and Leaseback Agreement with GECAS, for aircraft to be specifically built for Fiji Airways. The lessor is effectively renting the aircraft to Fiji Airways.

The Boeing 737 MAX fleet was grounded globally in March 2019, following the tragic incidents in Indonesia and Ethiopia. As such, all deliveries of the MAX aircraft were deferred. Production, however, continued. Almost eighteen months was spent by Boeing and the US Federal Aviation Administration (FAA) to resolve the issues which led to the fleet’s grounding. The summary of all the changes required by the FAA is available here.

In late 2020, the grounding was lifted, first by the FAA for the United States, then by other regulators around the world.

The Civil Aviation Authorities of Australia, New Zealand and Fiji followed with their lifting of the MAX suspensions in late March, after extensive technical safety assessments of this aircraft.

On April 1, 2021, Fiji Airways announced accepting the return to service requirements for the Boeing 737 MAX aircraft stipulated by CAAF, paving the way for these aircraft to arrive in Fiji.

Fiji Airways staff, including engineers, pilots and other experts, along with Civil Aviation Authority of Fiji (CAAF) have been in Seattle Washington, Boeing’s Aircraft Delivery Centre, since the beginning of April for the handover and acceptance process for the aircraft which arrived last week. In other words, they left well before this current outbreak and the process was already underway when the current unfortunate outbreak occurred.

I would like to reiterate that Fiji Airways is contractually obligated to take these aircraft. I have previously explained in statements and press conferences, with the last one on August 22, 2020 that aircraft contractual obligations are absolute. Penalties for breaking these contracts are much more severe than accepting and utilizing the aircraft to earn revenue. Most airlines around the world are doing the same.

What Fiji Airways has been able to do, as also explained on August 27, 2020, is re-negotiate and drive down monthly recurring fixed costs by approximately 50%.