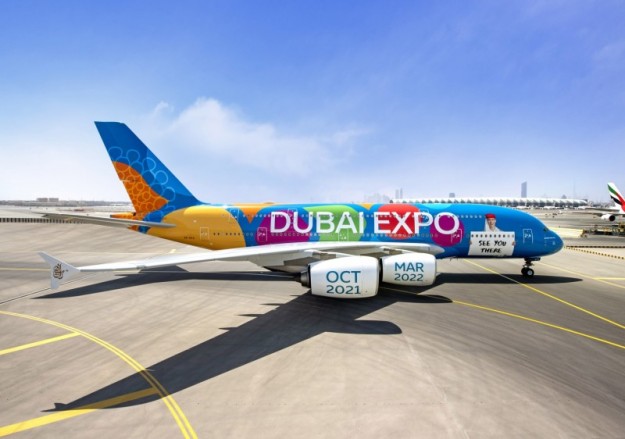 Emirates, the Premier Partner and Official Airline of Expo 2020 Dubai, has revealed a head-turning A380 livery dedicated to further carrying the global event’s messages worldwide.

The special livery is painted on the pictured A6-EEU.

A bold departure from the airline’s traditional white and gold paint scheme, this bright blue aircraft livery features large-scale graphics in vivid green, orange, pink, purple and red, which run across the fuselage and all the way up to the tail and fin interlaced with the distinct ring-shaped Expo 2020 Dubai logo. Special ‘Dubai Expo’ and ‘Be Part of the Magic’ messages run across both sides of the A380 fuselage. The engine cowls also carry the Expo 2020 Dubai messages and dates of the event.

In addition, the brave Burj Khalifa stuntwoman who appeared in the recent viral Emirates ad, carries an invitation to visit the event on both sides of the aircraft, holding a message board that says: ‘See you there’ and ‘Dubai Expo Oct-Mar 2022’.

The iconic Emirates red belly branding, which can be only seen when the aircraft is flying overhead, has been replaced by the opportunity themed orange ‘Dubai Expo’ branding, further increasing the event’s visibility and awareness as it flies to the airline’s A380 network over the course of the next 6 months. 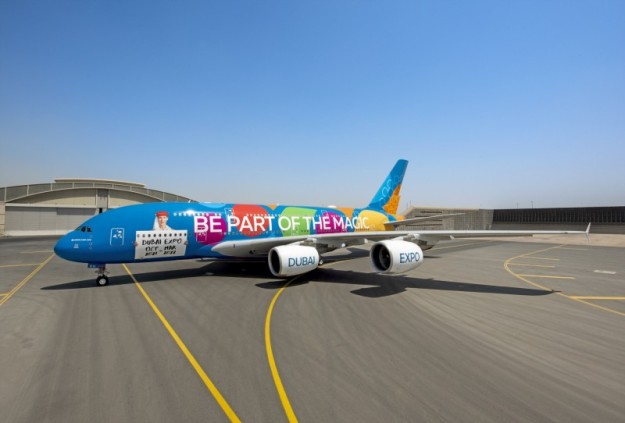 The new A380 livery was designed, painted, produced and installed in-house by the teams at Emirates. The livery was not just a decal, but a complete paint project, and is by far the largest one the airline has ever embarked on. A great deal of planning and ingenuity was involved to ensure the distinct livery design was brought to life and flawlessly executed.

The paint on A6-EEU, the aircraft chosen for the livery, was completely stripped. After that, eleven colors were applied on the aircraft in a careful, methodically sequenced manner. A ‘wild spray method’, electrostatic spray guns and conventional cup guns were used to put on the different colors, using over 2,500 sqm of tracing and masking material. All of the stencils and tracing guides were produced in-house by the airline’s UV printer and graphics workshop, and took numerous hours to fabricate and complete. The Emirates Engineering Aircraft Appearance Centre teams skillfully worked through the challenges of fine-tuning the outlines and masking to convert the designs onto a three dimensional aircraft, in addition to managing the contrasting colors and intricate background shades in this unique livery.

Decals were then applied on the engine cowls and, as well as the image of the Emirates Cabin crew holding the message boards adjacent to the aircraft’s exits.

The process of painting the livery design and applying the decals took 16 days and 4,379 man-hours to complete.

Emirates has a long tradition of showcasing special liveries on its Airbus A380 and Boeing 777 fleet, and in the last five years alone, close to 50 unique designs and 100 liveries have been brought to life by the team at the airline. Special liveries have helped pay a special tribute and carry the legacy of the late HH Sheikh Zayed bin Sultan Al Nahyan; bring sports fans closer to their favorite clubs, players and global tournaments; spread the UAE’s message of tolerance and multi-culturalism; raise awareness of the illegal wildlife trade, and much more. The innovative work done on the liveries has kept travelers, plane-spotters and the general public looking to the skies for inspiration.

The new Expo 2020 Dubai livery will appear on three Emirates A380 aircraft to help visually tell the story and reaffirm the themes of one of the largest global events to take place since the onset of the pandemic. The distinctive blue Expo aircraft will join the 40 other special liveries dedicated to Expo 2020 Dubai, which have collectively flown to over 130 destinations across the Emirates network since 2018.

The new livery will wow travelers and drive the Expo 2020 Dubai message when it heads to Los Angeles on 29 September.

Expo 2020 Dubai is the first World Expo ever hosted in the Middle East, Africa and South Asia (MEASA) region, and will run from October 2021 to March 2022. Its six-month program is packed with experiences to suit all ages and interests, including a rich line-up of themed weeks, entertainment, and edutainment. Art and culture fans as well as food and technology enthusiasts can explore exhibits, workshops, performances, live shows and more. Visitors can also drop by their national pavilion for a taste of home or experience the 190 other country pavilions. Emirates will be showcasing its own pavilion focused on the future of commercial aviation.

In other news, the company will restore the Dubai – London Gatwick route on December 10.