Aeroflot Russian Airlines made this announcement:

Aeroflot is reducing flight frequencies between Moscow and Tehran to one flight a week on Sundays, beginning March 8, 2020.

Passengers who have already purchased tickets on this route may rebook their tickets for any date up to and including May 31, 2020 for no additional fee.

•          obtain a refund for tickets at sales offices where they were purchased. Tickets purchased online can be returned at any of the airline’s sales offices or via the contact centre.

Changes and refunds will not incur additional fees. 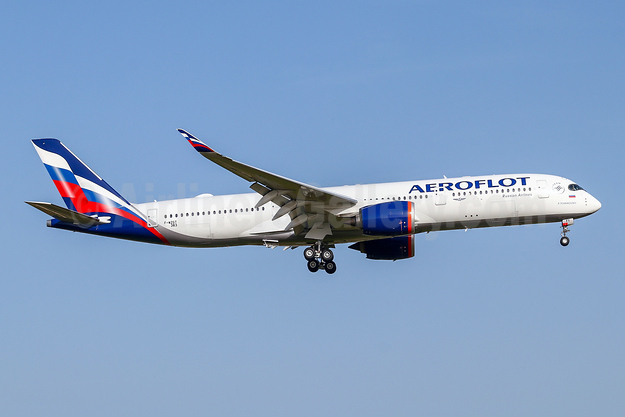 Aeroflot, the Russian flag carrier and member of the SkyTeam alliance, has taken delivery of its first Airbus A350-900, becoming the launch operator of the latest-generation widebody aircraft in Eastern Europe and CIS.

Aeroflot’s A350-900 features a brand new elegant cabin design, offering unrivalled passenger comfort. The aircraft has a spacious three-class cabin layout with 316 seats: 28 private Business Class suites with full-flat seats, 24 Comfort Class with extra legroom and 264 Economy Class. In addition, the latest-generation Panasonic eX3 in-flight entertainment system, HD screens and Wi-Fi connectivity will ensure enhanced experience for all passengers on long-haul flights.  Aeroflot will operate its A350-900 from Moscow to a number of destinations including London, Dubai, New York, Miami, Osaka and Beijing.

At the end of January 2020, the A350 XWB Family had received 935 firm orders from 50 customers worldwide, making it one of the most successful widebody aircraft ever.

The following flights will be operated from Terminal F:

Aeroflot’s flights from Sheremetyevo to Italian cities will be serviced from terminals that were previously specified in the schedule. Flights arriving from Italy will be serviced at Terminal F.

Aeroflot – Russian Airlines and Japan Airlines today announced a codeshare agreement that will offer added flexibility to passengers travelling between Russia and Japan. The codeshare comes into effect from March 29, 2020, with ticket sales launching at the beginning of March.

Both airlines will operate daily services between Tokyo (HND) and Moscow (SVO) under the codeshare agreement, as well as on connecting flights to major cities in Russia and Japan, thereby expanding the range of options available to passengers. Japan Airlines will add its “JL” designator codes on 10 major Russian destinations such as St. Petersburg, Kazan and Yekaterinburg. Aeroflot will place its “SU” designator codes on 10 popular Japanese destinations such as Sapporo, Osaka and Fukuoka.

Furthermore, both parties intend to increase codeshare destinations including Aeroflot’s new operation between Osaka (KIX) and Moscow (SVO) scheduled to commence in June 2020.

Aeroflot has operated a daily flight from Moscow to Tokyo since 1967, and is the leading carrier on East-West transit routes between fast-growing markets in Asia and Europe and North America. The Russian flag carrier offers seamless connectivity through its home airport and major hub at Sheremetyevo, as well as award-winning on-board service including menus designed specifically for travelers from countries in Asia.

Japan Airlines has also committedly operated flights between Tokyo and Moscow as the only Japanese carrier for over 50 years. Both partners are delighted to enter the partnership, and hope to contribute further to the market by providing customers with more options and great customer experience.

From March 29, 2020 Aeroflot’s flights to and from Tokyo will switch from Narita Airport to Haneda Airport (Terminal 3). It is located just 15 km from Tokyo city center. Travel time from the airport to the city will reduce by almost four times if going by train, and by more than half if travelling by taxi.

Starting with the summer 2020 flight schedule Aeroflot will operate daily flights between Moscow and Tokyo on the following timetable (all times local):

In other news, Aeroflot has launched ticket sales for flights to Singapore. Scheduled service on the new route between Moscow and Singapore will begin on October 25, 2020.

Flights will operate on the following schedule (all times local):

Flight number SU 280 departs Sheremetyevo at 19:40 on Mondays, Tuesdays, Wednesdays, Fridays and Sundays and arrives in Singapore at 10:55 the following day.

Flight number SU 281 departs Singapore at 12:30 on Mondays, Tuesdays, Wednesdays, Thursdays and Saturdays and arrives in Moscow at 18:30 the same day.

The world’s most modern and fuel-efficient long-haul aircraft, the А350-900, will operate on this route in a three-class configuration – Business Class, Comfort Class (Aeroflot’s premium economy product) and Economy Class.

The addition of Moscow-Singapore service to Aeroflot’s route network strengthens the company’s offering on transit routes to Asia from Europe and North America, which forms a key part of the airline’s strategy. The Russian flag carrier offers convenient and fast transfers through its hub at Moscow’s Sheremetyevo airport, with total travel times up to three hours shorter than those of competitors in Europe and Asia.

Aeroflot has begun phasing in operation of international flights from the new Terminal C at Moscow’s Sheremetyevo International Airport. The first departures and arrivals from the terminal will be to/from Helsinki, Dresden and Bucharest.

By mid-June Aeroflot plans to have completed the bulk of the migration to Terminal C. From October, Aeroflot expects to operate 268 international flights from the new terminal. A joint Aeroflot-Sheremetyevo working group was formed to manage the transition and establish a timeline and testing program.

Terminal C, which occupies more than 127,300 square meters at Sheremetyevo’s Northern Terminal Complex, is integrated with Terminal B, to which Aeroflot previously shifted domestic flight operations. Terminal C can accommodate 20 million passengers a year. The rollout of Terminal C, combined with the commissioning of a third runway at Sheremetyevo in September 2019, establish a fundamentally new basis for Aeroflot Group operations. Aeroflot Russian Airlines has updated its livery with the first Airbus A350-900 fresh out of the paint shop at Airbus.

The new look adds larger titles and removes the blue underside with the red trim line. The fuselage has also gone from silver to white.

The pictured A350-941 carries the temporary registration of F-WZGT and will become VQ-BFY (msn 383) on delivery. It carries the name of  “P. Tchaikovsky”.