JustPlanes en route from Alaska to Holland in the cockpit of the Boeing 747-8 departing Anchorage for Amsterdam Schiphol Airport with stops at Los Angeles and Chicago. Here you can see what the pilotseye sees from the nose camera on departure from O’Hare Airport. The complete flightdeck film is 4 hours long.

Just Planes is very happy to welcome AirBridgeCargo, the 267th airline in our Cockpit Series and 1st airline from Russia! ABC is the largest Russian cargo airline and part of the Volga-Dnepr Group. It operates a fleet of 747-400s and 747-8s all over the world. Our film joins the airline’s “Round the World” flight. The program starts at the busy cargo stop in Alaska and ends at the busy cargo airport of Schiphol with stops in Los Angeles and Chicago.

AirBridgeCargo made this announcement:

AirBridgeCargo Airlines (ABC), one of the leading carriers with dedicated airlift for special cargoes, saw its volumes of special commodities increase by over 25% in 2018, demonstrating its capability to cater to the needs of customers worldwide and guarantee the highest levels of service quality.

Alignment of internal processes, the introduction of digital solutions to enhance customer experience, partnerships with reliable companies, and the reinforcement of ABC’s global team helped to boost abc pharma volumes by more than 60% year-on-year, while dangerous goods shipments using the airline’s abc DG product rose by 40%. abc XL demand for oversize and heavy cargoes increased by over 20% versus 2017, and e-commerce business delivered via AirBridgeCargo’s abc e-com product was up 6%.

The company expects this growth trajectory to continue in terms of shipment volumes as it increases its focus on performance quality and customer satisfaction.

“2019 will be an exceptional year for ABC – the year of our 15th anniversary – and we are delighted to achieve another company milestone supported by the consistent results of 2018. New challenges are ahead of us, but that’s what makes the air cargo industry an exciting place to be. We are all set and ready for new plans and accomplishments as we continue to follow our growth strategy,” highlighted Sergey Lazarev, General Director of AirBridgeCargo Airlines.

One of the main areas for further progress this year will lie in the development of digital front-end solutions for the convenience of ABC customers worldwide. AirBridgeCargo is committed to creating a more user-friendly digital environment, starting with the implementation of equipment to improve the monitoring of a cargo’s condition – temperature logger, shocking sensors, Bluetooth transmitting devices – up to partnering with the world’s leading companies, such as Unilode and SITAONAIR, to guarantee 100% traceability of shipments and continue the move towards an ‘Internet of Things’ platform.

Liege Airport and AirBridgeCargo Airlines have signed an historic lease agreement for 10 years. This arrangement will bring the scale of cooperation between two companies to the next level of development, boosting air cargo volumes of ABC to/from the airport and placing Liege Airport among the top 5 cargo airports in Europe by 2020.

The agreement comes as a logical extension of Memorandum of Understanding, which was signed between Liege Airport and Volga-Dnepr Group earlier this year during the Farnborough International Airshow 2018 in July, and will contribute to the development of the regional economy in general, creating numerous amounts of jobs and favouring growth of air cargo sector, and the airport development in particular, heating up cargo infrastructure and freight flows to/from the airport.

Under new agreement AirBridgeCargo will lease warehouse premises for the total area of 25,000 sq. m. for effective and seamless cargo operations in the airport. The investment amounts to 25 million euros and includes 2,000 sq. m. of office space to guarantee smooth daily flight management. 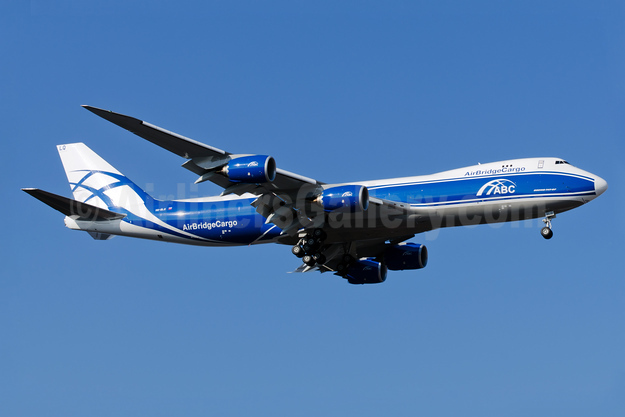 AirBridgeCargo Airlines-ABC (Moscow-Sheremetyevo), the largest Russian scheduled cargo airline and part of Volga Dnepr Group, is further expanding its services in Central Europe by introducing direct services to/from Munich with a Boeing 747 freighter on May 9.

The new Munich flight to Moscow’s Sheremetyevo Airport will be in addition to the existing 4 weekly Boeing 737 flights operated by Atran Cargo Airlines, also part of Volga Dnepr Group. ABC Boeing 747 all-cargo flight between the Bavarian capital and ABC hub in Moscow (Sheremetyevo) will be on Friday midday, providing ideal end of the week departure time for European customers.

Germany has always been one of the most important markets contributing to ABC’s growth over the last decade. Earlier this year ABC launched scheduled Boeing 747 services to and from Leipzig, extending the Group’s strong association with the airport, where it has invested in a modern aircraft maintenance and repair facility to serve a variety of aircraft types (Boeing 747-200/300/400/8 (CF-50/80, PW4000), Boeing 737CL).

With delivery of the fifth 747-8 Freighter, AirBridgeCargo continues to follow its long-term fleet modernization strategy to further improve the quality of its product. The new aircraft will be used on ABC’s existing route network linking Europe, Asia and the United States via the airline’s hub in Moscow.

The carrier achieved a 5% growth in cargo tonnage in 2013, with its highest ever volume of 340,000 tons across its network linking Europe, Russia, Asia and North America.

The airline reported volume growth on all of its major routes and this was matched by a 5% improvement in revenue. AirBridgeCargo’s Freight Ton-Kilometers (FTK) rose 15% in 2013, while its average load factor of 72% show a marginal 1.7% gain over the previous year.

Despite challenging market conditions in 2013, ABC continued with its long-term fleet modernisation strategy and took delivery of two more new generation freighters Boeing 747-8F. With the delivery of its fifth Boeing 747-8F in December 2013, AirBridgeCargo  completed its fleet renewal plan which began two years ago. This investment has reduced the average age of its aircraft fleet from nine years at the end of 2011 to three years at the end of 2013. At present, ABC’s fleet is one of the youngest in the air cargo industry.

AirBridgeCargo took delivery of its first Boeing 747-8F (VQ-BLQ) (see above) in January 2012, with the second and third aircraft joining its fleet in March and December 2012. The fourth new generation freighter entered service with ABC in September last year. As part of the modernization program, ABC removed four older aircraft from its fleet; two Boeing 747-200F, one Boeing 747-300F and a Boeing 747-400ERF. A further 747-400ERF will leave its fleet in 2014.

In 2013, AirBridgeCargo joined the Olympic movement with the delivery of 126 tons of broadcasting equipment as well as 214 tons of sports and lighting equipment for the 2014 Winter Olympics taking place in the Russia City of Sochi in February. The flights were performed using Boeing 747 and Boeing 737 cargo aircraft.

The new 747-8 Freighter is 250 feet, 2 inches (76.3 m) long, which is 18 feet and 4 inches (5.6 m) longer than its predecessor, the 747-400 Freighter. The stretch provides customers with 16 percent more revenue cargo volume, which translates to four additional main-deck pallets and three additional lower-hold pallets. The 747-8 Freighters are powered with GE’s GEnx-2B engines.

The addition of the 747-8 to ABC’s fleet is an important step in its long-term business strategy. The second and third Boeing 747-8s will join the fleet in March and September 2012 and the last two aircraft on order are scheduled for delivery in 2013. In addition, ABC has options for five more 747-8s. By the end of 2012, after retiring old aircraft types, ABC’s fleet will consist of three Boeing 747-8 Freighters and eight 747-400 Freighters.

Volga-Dnepr Group (Volga-Dnepr Airlines and AirBridgeCargo) (Ulyanovsk) has placed an initial order for the upgraded Antonov An-124-100M-150. The group is made up of 11 companies.