AirAsia India (Chennai) yesterday (March 21) celebrated the unveiling of Airbus A320-216 VT-JRT (msn 3448, ex OK-NES) (below). The unique livery is a tribute to Indian aviation pioneer J.R.D. Tata with a Puss Moth, the aircraft he flew on October 15, 1932, leading to the start of Tata Airlines and the start of aviation in India.

“The Pioneer” is the fourth Airbus A320 for the new airline which commenced scheduled passenger operations on June 12, 2014. 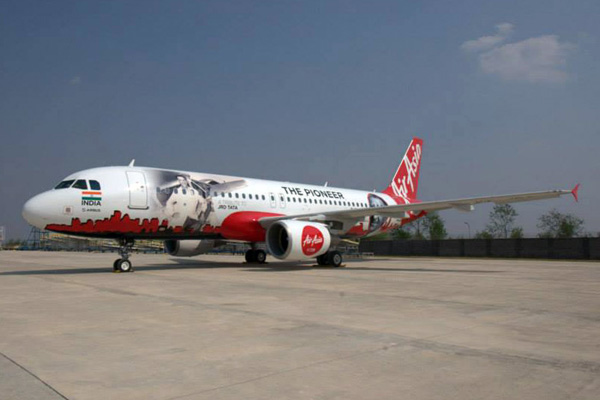 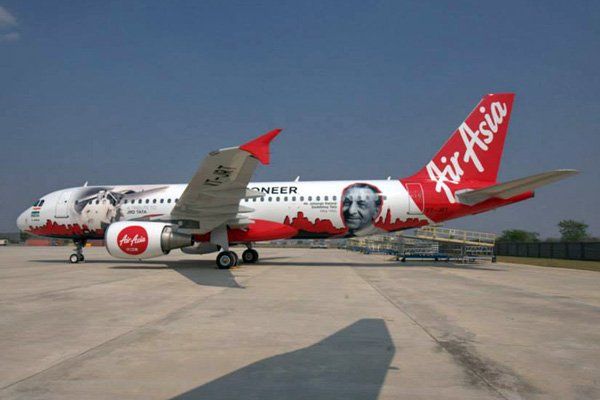 All photos and images by AirAsia India.

Below Photo: AirAsia India. Mr. Ratan Tata is pictured signing his photo mural in the cabin of VT-JRT during the event.

My grandfather, Carle Morton, was an aviation pioneer.  If you tried to look him up on the internet, his name is not there.  (It was a kind gesture, though).  He was a very early cobalt, platinum, uranium level frequent flier, from the 1930s on.  Grandad became a true av fan, also.  His position as sales manager for a four-state area kept him traveling every week.  He rapidly chose air transportation to become more time efficient in an era when very few businessmen thought that way.  While his counterparts and competitors were on a train or behind the wheel on two-lane highways, Carle Morton was already there directing his local salesmen and closing contracts.  He had the ability to manage men and sell, the attributes of any successful sales manager.  Mobility and effectiveness justified the high cost of airline flying.

Even though some early airliners were rickety and safety records could make people pale, Grandad flew them all.  There were wooden Fokker Trimotors of TWA, squat Curtis Condor bi-planes of American, converted Lockheed Lodestars of Continental, Fords, Lockheed 10s, Fairchild 71s and Stinson A models.  The list went on and on.  Did you know the fabric covered, Stinson A trimotor had 2 and 1 seating?  The 1930s and early 40s was a time period when life insurance policies were voided if one flew on an airliner.  Passengers had to purchase aviation accident insurance at the airport.  Remember seeing photos of Mutual of Omaha counters?  He was a fearless flier but he bought the weekly policies to protect Grandma.

Carle saved his airline tickets, all of them.  That practice was basically for the Internal Revenue Service because Uncle Sam routinely audited traveling business people with larger expense accounts, just like today.  Long after the IRS would have been interested, he kept his airline tickets and folders.    They became living diaries with all sorts of notes written on the ticket folders.  Packets of tickets and folders were bundled by year.  When I was a boy, he would let me scrounge through those rubber band stacks of aviation history.  Flights on ghost airlines like Wisconsin Central, All American Airways, Chicago & Southern, Colonial, and his favorite: Pennsylvania Central Airlines.  He explained to me the evolution of air carriers, that “Whiskey Central” became North Central, AAA changed its name to Allegheny, C&S merged into Delta, Colonial was absorbed by Eastern, and PCA transmogrified into Capital.  My learning curve went into orbit.

He flew Capital Airlines more than any carrier.  Carle was flying them in the beginning when the corporate name was Pennsylvania Airlines, then modified to Pennsylvania Central Airlines.  He grew right with them.  There was a unique ticket:  Pennsylvania Airlines, 1933, Ford trimotor, Pittsburgh to Cleveland with a stop at Akron.  Yes, he said, the Ford vibrated like a washing machine.  Wow, a Boeing 247 trip on PCA from Harrisburg to Buffalo in 1938 for $11.00.  Grandad really enjoyed the maturity of Capital.  He loved the DC-3, was in awe of the 049 Constellation and even the DC-4 received decent praise.

Grandfather’s frequent use of Capital did not go unnoticed from that airline’s top management.  He had a signed and framed letter from Capital’s president, J. H. Carmichael, thanking him for flying a zillion miles with them.  Can you imagine 4 to 6 segments every week for 25 unbroken years!  Carle Morton’s picture appeared in a 1953 Capital print ad touting the benefits of using a city ticket office.  Grandad was on a first name basis with station employees at 10 locations.

I flipped through pristine ticket jackets and stubs from All American Airways (precursor to Allegheny).  Many flights were Pittsburgh to Altoona, Johnstown, Williamsport, Wilkes-Barre and Harrisburg.  All DC-3s, each segment averaged $5.00.  All American’s DC-3s were newer than most and he appreciated that.

For nine months of the year, Carle’s Monday morning started with a Capital DC-4 from Erie,  Pennsylvania to Pittsburgh.  Watching that “four motor” lumber off the 4900 foot runway sent chills up my spine.  Capital later took the DC-4s off the Erie schedule because of marginal runway length.  From PIT, Grandad branched out to three states.  He would work with his sales force in a given area for several weeks then another territory would get a visit from Mr. Morton.  Grandad would come home every Friday evening, almost always on a Capital DC-3.  I leaned over the airport fence,  straining for a glimpse of the nav lights and listening for the first sounds of radial engines in the distance.  The passengers would emerge, all attired in suits, hats and overcoats.  This was the incubator of my aviation life.

He was not a pilot but rather a pure participant in the aviation experience.  Grandad pointed out to me the symphony of tugs, fuel trucks, ticket agents, dispatch, line mechanics and even the “honey wagon”.  Each piece had to fit in order to make it all work.  He introduced me to uniformed stewards who offered in-flight passengers Chiclets from silver trays.  I remember a visit to Capital’s operations in 1956 and listening to the ceaseless teletype machines and watching the ops guys place grease pencil markings on clear Plexiglas.

My grandfather kept a sort of flight diary on the backs of ticket folders.  He reminded himself that the Pittsburgh airport had great chocolate malts.  Morgantown and Wheeling,  West Virginia had no food at their airports.  Detroit-Willow Run had a good shoeshine stand where the price was only a dime.  He jotted down the names and phone numbers of taxi cabs and their rates.  Places to eat, and those restaurants to pass up, graced the borders of his ticket jackets.

There were some long trips sprinkled here and there within the ticket bundles:  United DC-4s and -6s to the West, TWA 049 and 649 Connies to Indianapolis, Kansas City and Albuquerque, and an all-day multi-stop flight to Atlanta on an Eastern Convair 440.  Here was a five-stop trip on a North Central DC-3 to the upper peninsula of Michigan.

Despite all the business flying he did and all the enjoyment he got out of aviation, when it came time for a vacation trip during the 1940s and 50s, he and grandma would usually drive.  Grandad was frugal and there weren’t many bargain fares available then.  He believed that aviation improved his business life but was too extravagant for personal vacations.  Isn’t that ironic?  If frequent flier programs had been in existence, the two of them could have flown free on all their vacations.

Grandad would occasionally plan a business trip routing in order to fly on a particular airline or aircraft for the first time.  He was on a number of “first flights”.  Capital Viscounts were a favorite of his.  The 745Ds came on-line in 1955.  First flight folders were found from Detroit to Pittsburgh and Buffalo-Detroit.  Carle would go out of his way to set up a Viscount trip.  Vickers had such a futuristic jump on everyone else.   He flew Capital right up until they merged into United in 1961.

Copyright Photo: Bruce Drum. The Mid Atlantic Air Museum (Reading, PA) restored this Vickers Viscount 797 (N7471, msn 233) in the early 1990s in the 1947 livery of Capital Airlines but it has since been grounded. The turboprop airliner is seen at Washington (National) on July 10, 1993.

He told me many true stories of flying experiences.  His analogies of in-flight drama were sometimes dark but not terrifying.  With no onboard weather radar or air traffic control radar, accidental penetration into nasty weather happened.  Low and slow airliners got the worst of it.  I learned of ice being flung off propellers and into the sides of the fuselage.  The DC-3 could carry itself pretty well in icing, he would say.  He spoke of how tough it was on the stewards and stewardesses cleaning up airsick passengers while flying over the Appalachian and Blue Ridge Mountains.  Grandad saw a ramp worker accidently walk into an idling propeller of a DC-4.  The employee was dismembered in front of scores of disbelieving eyes.

Grandfather retired when he was 70, still sharp as a tack.  He continued to fly occasionally on vacation trips.  His first jet flight was in the stack – the black non-fan exhaust of a TWA 707.  Reunions, graduations and weddings were all duly diaried with their appropriate tickets.  He outlived most of his large family of brothers and sister, and his beloved wife.  One by one he would be summoned to the somber occasion of a funeral.  Those later ticket folders bore comments in a shaking handwriting.

When I became a pilot I flew him in light planes.  He and I both enjoyed that immensely.  At age 93, Carle flew to Houston to visit my little family and see my daughter, Carrie, who was named after Grandma.  We went up in a Cessna 172 and later that day I escorted him to the control tower at IAH to observe air traffic action at a big city airport.

Grandad passed away at age 99.  He was incredibly healthy until he was 96; he had been a sprinter in college and maintained an athlete’s regimen.  Carle Morton was a well disciplined yet compassionate and giving man, quick with a laugh.  He was my mentor in so many ways.  Introducing me to  commercial aviation was a life enhancing act for both of us.  Those nostalgic tickets, his tickets, what memories they silently hold.