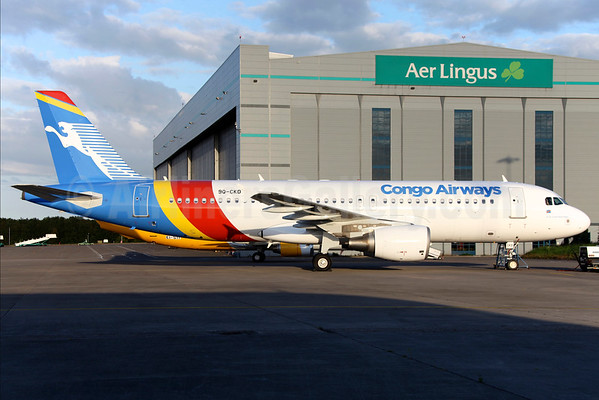 AirAsia (Malaysia) (Kuala Lumpur) CEO Tony Fernandes (below) is fighting a critical report by the independent research firm GMT. The report, according to this story by The Financial Times, states the airline is “teetering on default”.

Above Photo: AirAsia. Time Magazine previously proclaimed CEO Tony Fernandes as one of the Top 100 Most Influential People in the World.

This interesting read also explains the intricate financing of the group and lays out in a graph how the group is owned and financed.

This story is recommended. 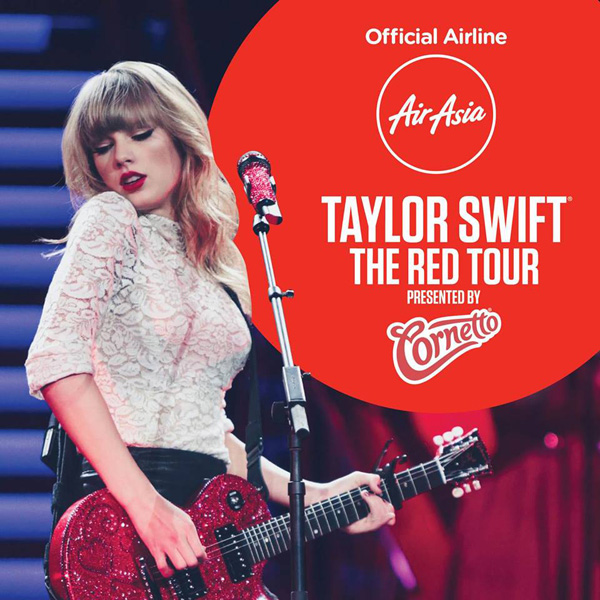 Photo Above: AirAsia. AirAsia in 2014 partnered with U.S. singer Taylor Swift and became the official airline for her Red Tour in Asia.

Top Copyright Photo: Michael B. Ing/AirlinersGallery.com. In conjunction with the 2014 Red Tour, AirAsia decorated this Airbus A320-216 9M-AHM (msn 3536) with the image of Taylor Swift.

AirAsia India (Chennai) yesterday (March 21) celebrated the unveiling of Airbus A320-216 VT-JRT (msn 3448, ex OK-NES) (below). The unique livery is a tribute to Indian aviation pioneer J.R.D. Tata with a Puss Moth, the aircraft he flew on October 15, 1932, leading to the start of Tata Airlines and the start of aviation in India.

“The Pioneer” is the fourth Airbus A320 for the new airline which commenced scheduled passenger operations on June 12, 2014.

All photos and images by AirAsia India.

Below Photo: AirAsia India. Mr. Ratan Tata is pictured signing his photo mural in the cabin of VT-JRT during the event.

The flight data recorder of crashed AirAsia Indonesia (Indonesia AirAsia) (Jakarta) flight QZ 8501 operated with the pictured Airbus A320-216 PK-AXC (msn 3648) has been located under the wing. The device was retrieved and is good condition and has been sent to Jakarta for analysis according to the The Straits Times quoting BASARNAS, the lead search and rescue agency of Indonesia. The cockpit voice recorder has also been located in the wreckage underwater in the Java Sea but has not yet been recovered.

AirAsia Indonesia wishes to inform the latest development on the SAR operation of flight QZ 8501 lead by The National Search and Rescue Agency (BASARNAS) Republic of Indonesia.

Good weather and clear visibility have allowed for SAR operations to continue with the focus remaining on the search and recovery of the passengers in the primary search area.

SAR vessels and sea divers also approached the area where the pings were detected, suspected to be the location of the aircraft’s black box. No additional remain recoveries were reported today.

To date, BASARNAS has confirmed to have recovered a total of 48 remains of which 32 remains have been identified by DVI POLRI and 16 remains are still being identified.

Copyright Photo: Michael B. Ing/AirlinersGallery.com. PK-AXC is pictured arriving at Singapore before the tragic crash.

AirAsia Indonesia (Indonesia AirAsia) (Jakarta) tail section from flight QZ 8501 from the pictured Airbus A320-216 PK-AXC (msn 3648) which was operated on a  flight from Surabaya to Singapore with 162 passengers and crew members has been located by divers in the Java Sea. In addition, a section of the fuselage with the aircraft’s PK-AXC registration marks has also been located in the Java Sea. It is now hoped the flight data recorders (not black boxes) will be located near the located tail section.

Tony Fernandes, CEO of the AirAsia Group, stated on his Twitter account; “I am led to believe the tail section has been found. If right part of tail section then the black box should be there.”

Copyright Photo: Michael B. Ing/AirlinersGallery.com. Airbus A320-216 PK-AXC at Singapore before the tragic accident.

Video: First images of the tail and registration markings:

AirAsia Indonesia (Indonesia AirAsia) (part of the AirAsia Group) (Jakarta) missing flight QZ 8501 may have been located. Indonesian searchers battled bad weather today in the Java Sea. The searchers are using sonar and may located the fuselage of Airbus A320-216 PK-AXC possibly with the remaining passengers on board. Divers are trying to reach the possible wreckage but rough seas are hampering the attempts.

The debris found yesterday has been confirmed to be from the missing flight. Ten bodies has been recovered that were floating in the water. There were 162 passengers and crew members on the ill-fated flight.

AirAsia Group CEO Tony Fernandes told reporters he hoped there was “at least some closure” for families according to CNN.

AirAsia Indonesia regrets to inform that The National Search and Rescue Agency Republic of Indonesia (BASARNAS) today confirmed that the debris found earlier today is indeed from QZ 8501, the flight that had lost contact with air traffic control on the morning of 28th December 2014.

The debris of the aircraft was found in the Karimata Strait around 110 nautical miles south west from Pangkalan Bun.

The aircraft was an Airbus A320-200 with the registration number PK-AXC. There were 155 passengers on board, with 137 adults, 17 children and 1 infant. Also on board were 2 pilots, 4 cabin crews and one engineer.

At the present time, search and rescue operations are still in progress and further investigation of the debris found at the location is still underway. AirAsia Indonesia employees have been sent to the site and will be fully cooperating with BASARNAS, National Transportation Safety Committee (NTSC), and relevant authorities on the investigation.

Sunu Widyatmoko, Chief Executive Officer of AirAsia Indonesia said: “We are sorry to be here today under these tragic circumstances. We would like to extend our sincere sympathies to the family and friends of those on board QZ 8501. Our sympathies also go out to the families of our dear colleagues.”

Tony Fernandes, Group Chief Executive Officer of AirAsia added: “I am absolutely devastated. This is a very difficult moment for all of us at AirAsia as we await further developments of the search and rescue operations but our first priority now is the wellbeing of the family members of those onboard QZ8501.”

AirAsia Indonesia will be inviting family members to Surabaya, where a dedicated team of care providers will be assigned to each family to ensure that all of their needs are met. Counsellors, religious and spiritual personnel have also been invited to the family center to provide any necessary services.

Copyright Photo: Michael B. Ing/AirlinersGallery.com. Airbus A320-216 PK-AXC (msn 3648) taxies at Singapore before the accident.

AirAsia Zest (AirAsia Philippines) (formerly Zest Air) (Manila), another associated airline of the AirAsia Group (Malaysia) (Kuala Lumpur), today (December 30) was involved in an incident in the Philippines while the world attention focuses on the crash of an AirAsia Indonesia Airbus A320. An AirAsia Zest Airbus A320-216, registered as RP-C8972 (msn 2826), today overshot the runway on landing at Kalibo on the island of Panay in the Philippines. Flight Z2 272 was operating from Manila to Kalibo with 159 passengers and crew members on board. There were no reported injuries.

AirAsia (AirAsia.com) (Indonesia) (Indonesia AirAsia) (Jakarta) flight QZ 8501 with 162 passengers and crew members flying from Surabaya to Singapore is missing. The crew flying Airbus A320-200 (PK-AXC) lost radar contact with Indonesian Air Traffic Control (ATC) this morning (December 28). Aircraft searching today were unable to locate the missing flight. The flight is now missing for over 12 hours due to the time difference. It is now getting dark again in Indonesia and the search with aircraft will resume tomorrow. However ships will continue to search for the aircraft overnight.

Indonesia AirAsia, formerly AWAir (Air Wagon International), is owned by Fersindo Nusaperkasa (51%) and AirAsia Berhad (AirAsia Malaysia) (49%). The airline operates under the AirAsia brand. The general media is incorrectly calling this a Malaysian airline due to its confusion with the much larger AirAsia (Kuala Lumpur).

We will continue to update this report as further information is received.

AirAsia has changed its normal red logo to this basic black-gray logo in mourning of missing flight QZ 8501.

AirAsia has issued this updated statement:

AirAsia Indonesia regrets to confirm that flight QZ 8501 from Surabaya to Singapore has lost contact with air traffic control at 07:24 (Surabaya LT) this morning (December 28). The flight took off from Juanda International Airport in Surabaya at 0535 hours.

The aircraft was an Airbus A320-200 with the registration number PK-AXC. There were two pilots, four flight attendants and one engineer on board.

At this time, search and rescue operations are being conducted under the guidance of The Indonesia of Civil Aviation Authority (CAA). AirAsia Indonesia is cooperating fully and assisting the investigation in every possible way.

The aircraft was on the submitted flight plan route and was requesting deviation due to enroute weather before communication with the aircraft was lost while it was still under the control of the Indonesian Air Traffic Control (ATC).

The aircraft had undergone its last scheduled maintenance on November 16, 2014.

“I am touched by the massive show of support especially from my fellow airlines. This is my worse nightmare. But there is no stopping. I, as your group CEO, will be there through these hard times. We will go through this terrible ordeal together.”

“On my way to Surabaya where most of the passangers are from as with my Indonesian management. Providing information as we get it.” 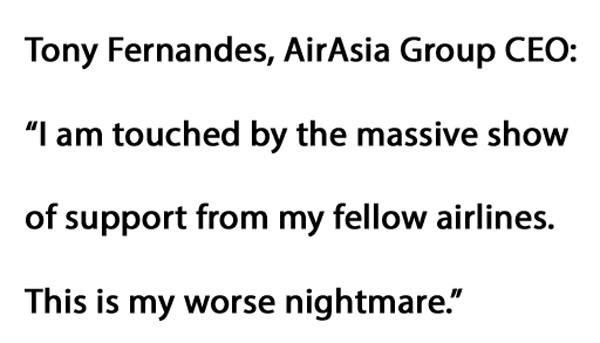 There were reported thunderstorms in the path of the airliner. This area is currently in their monsoon season (rainy season).

Top Copyright Photo: Michael B. Ing/AirlinersGallery.com. Airbus A320-216 PK-AXC (msn 3648) of AirAsia Indonesia is pictured arriving at Singapore prior to today’s event. PK-AXC was delivered new on October 15, 2008.

Below Copyright Photo: Michael B. Ing/AirlinersGallery.com. Another view of PK-AXC at Singapore.

According to Flightradar24 the flight “was flying on FL320. Other aircraft in same area were flying on FL340-FL390.”

The crew reportedly requested a higher altitude of FL380 due to the thunderstorms in the area. 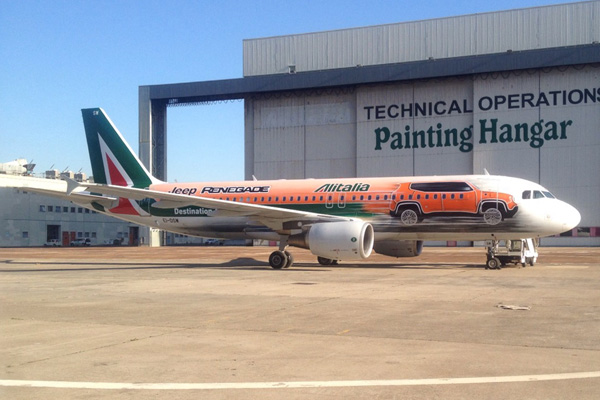 Alitalia (2nd) (Rome) has introduced a new promotional logo jet for the new Italian-built Jeep Renegade. The pictured ex-Air One Airbus A320-216 EI-DSW (msn 3609) was ferried from Shannon where it was painted to Rome (Fiumicino) on December 20.

According to Wikipedia, “the Jeep Renegade (BU) is a subcompact crossover SUV (mini SUV in Europe) from the Jeep division of Chrysler. It will be built in Melfi, Italy alongside the related Fiat 500X with which it shares its platform. It was first shown to the public in March 2014 at the Geneva Motor Show and mass-production has started in late August. The Renegade will be the first Jeep product to be produced exclusively outside of North America, being produced in Melfi, Italy, and will sell in South African, European and North American markets.”