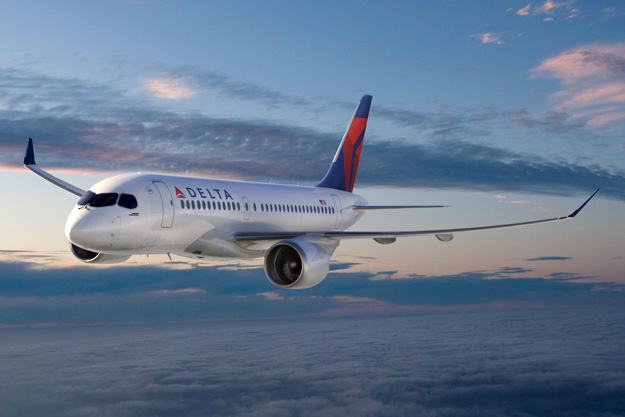 Delta Air Lines’ CEO Ed Bastian yesterday, in the first quarter 2018 earnings call, confirmed the first delivery of the new 110-seat Bombardier CS100 will be in the fourth quarter of 2018. The airline is planning to inaugurate CS100 services at the start of 2019. Delta has 75 copies on order. 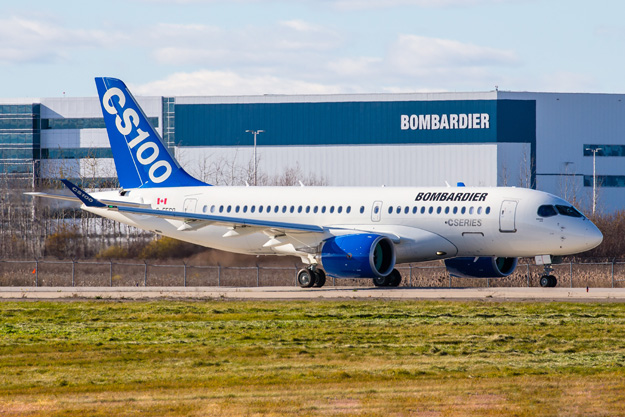 Bombardier Commercial Aircraft (Montreal) announced yesterday (December 18) that its all-new CS100 aircraft received its Transport Canada Type Certification following a comprehensive and rigorous testing program, which included more than 3,000 flight test hours, the validation of thousands of test results and the authentication of extensive design and performance data. Obtaining the Type Certificate for the CS100 aircraft paves the way for the delivery and entry into service of the CS100 aircraft with first operator SWISS in Q2 2016.

Design Approval Designees (DADs), engineers authorized to act on behalf of the Minister of Transport to approve aeronautical design and make findings of compliance, worked closely with Transport Canada over the last five years planning, testing, and reviewing thousands of technical drawings and documents that ultimately define the C Series aircraft and allow it to be built against this design definition. Once Bombardier demonstrated that the C Series aircraft design fully complied with the safety requirements mandated by Transport Canada, the aircraft was issued its Type Certificate.

Bombardier’s CS300 aircraft, the larger model, is on track to obtain its Type Certificate within the next six months as planned. Bombardier will continue to work with Transport Canada to validate the CS100 aircraft’s training syllabus.

The CS100 and CS300 aircraft have over 95 per cent parts commonality, as well as the same type rating. The groundbreaking Pratt & Whitney PurePower® PW1500G engine, combined with advanced aerodynamics, delivers reduced fuel burn, noise and emissions, increasing the aircraft’s environmental and social compatibility.

Bombardier has booked orders and commitments for 603 C Series aircraft, which include firm orders for 243.

Bombardier (Montreal), fresh from the Paris Air Show (Le Bourget Airport), brought the new CS100 (BD-500-1A10) C-GWXZ (msn 5005) in the Swiss livery to Zurich today. The new airliner did a fly-by (above) before landing (below). Swiss International Air Lines (Zurich) is the launch customer.

Bombardier (Montreal) announced today that launch operator Swiss International Air Lines (Zurich) has converted 10 of its 30 firm-ordered CS100 aircraft to the larger CS300 aircraft. The original purchase agreement for 30 CS100 aircraft was signed by Deutsche Lufthansa AG on Swiss’ behalf and announced in 2009.

Bombardier has booked orders and commitments for 603 C Series aircraft, which include firm orders for 243.

Swiss International Air Lines (Zurich) and Bombardier Commercial Aircraft (Montreal) announced Swiss will be the first customer to take delivery and operate the CSeries aircraft when the CS100 aircraft enters service in the first half of 2016. Bombardier also confirmed the CSeries aircraft will make its world debut at the International Paris Air Show being held at Le Bourget, France and will fly directly to Zürich, Switzerland in June as part of a demonstration organized for Swiss’ local stakeholders.

Swiss was previously announced as the launch customer for the CSeries aircraft program after parent Deutsche Lufthansa AG (Lufthansa) signed a firm purchase agreement in 2009 for 30 CS100 single-aisle aircraft for Swiss. 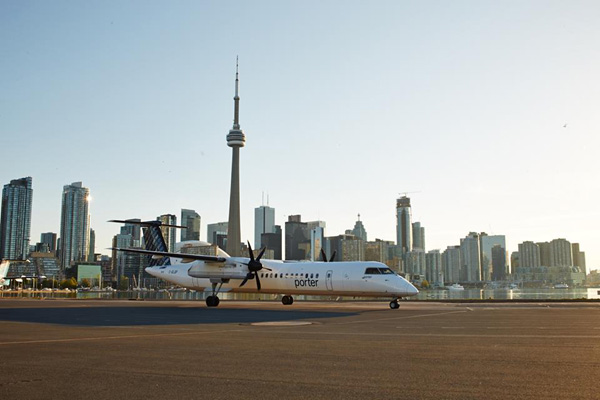 Porter Airlines (Toronto-Billy Bishop Toronto City Airport) wants to bring Canadian-built Bombardier CS100 jets to its downtown airport home (above). The regional carrier has been pushing politically for the Toronto City Council to vote yes on a city staff report on allowing jets at the small downtown noise-sensitive airport.

Toronto City Council indicated at their meeting that there was insufficient information to decide on the issue and required acceptance of caps on expansion as a condition of moving forward with the negotiations. The Toronto Port Authority refused to agree to caps, and, as a result, there are no negotiations taking place.

The Port Authority is proceeding unilaterally to conduct some additional studies, and they will not be completed until late fall, at the earliest.

There is also an expected federal election in October which will probably also decide the issue.

Porter Airlines, in consultation with independent aviation consultants, has developed a runway proposal with the objective of designing a runway that does not change the enjoyment of Lake Ontario by Torontonians, including the boating community.

The proposed extension of up to 200 meters into the water at each end of the main runway meets the city’s request that the runway have no material impact on the current Marine Exclusion Zone (MEZ) or on the western shipping channel. Porter has worked closely with stakeholders and our airport consultant, LPS Avia Consulting, to ensure this point.

Regardless of whether Porter’s runway request is approved, Transport Canada will likely require runway extensions into the water for new Runway End Safety Area (RESA) enhancements. These potential extensions have been included in Porter’s proposal. 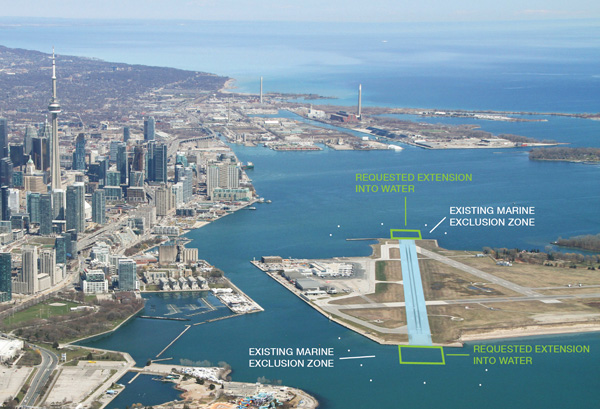 Under the Tripartite Agreement that governs Billy Bishop Toronto City Airport, jet aircraft are prohibited from operating at the airport. This regulation was established 30 years ago to prevent noisy planes from landing on the waterfront.

Since then, there have been significant advancements in jet aircraft technology, resulting in much quieter jets. The CS100 is comparably quiet to the Q400 turboprops Porter currently flies.

Only aircraft that meet very strict noise limits – the strictest in the world – can fly from Billy Bishop Toronto City Airport. Porter is asking that the ban on jets be lifted without any change to the airport’s noise restrictions.

Experts say that the CS100 will almost certainly meet the noise restrictions. If it doesn’t, Porter will not purchase the aircraft.

If extended, Porter Airlines would add the CS100s (it has 12 on conditional order but it is still under development) and proposes to operate on the following possible routes: 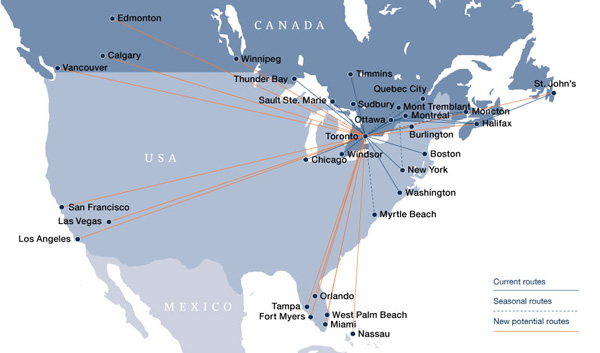 Meanwhile Air Canada (Montreal), not surprisingly, is opposed to any jets at Billy Bishop and has issued this statement:

On March 31, at a public consultation for the Master Plan for the Billy Bishop Toronto City Airport by the Toronto Port Authority (also known as Ports Toronto), the following became clear:

The current Ports Toronto Master Planning exercise is restricted to one option – promoting an extension of the runway at both ends and removing the restrictions on jet aircraft to accommodate the stated business plan and objectives of Porter Airlines, despite opposition from the community and other carriers;

No consideration appears to have been given to expanding turboprop operations at the airport (the preferred approach of Air Canada) – the effort remains focused on the interests of Porter Airlines as opposed to being a balanced review of other options for growth;

Ports Toronto stated that it envisioned slot growth at the airport going from the current 202 to only 242 daily slots, which would allow for immaterial incremental slots for Air Canada and new entrants, if any; and

Ports Toronto stated that it envisioned that if jets were approved, that a number of these slots would be sought by private jet operators – further reducing the number of slots available to commercial carriers such as Air Canada.

“We do not support jets at Billy Bishop – we prefer to see a growing downtown airport focused on short haul passengers using modern turboprop aircraft, which would be more consistent with the spirit and intent of the original tripartite agreement at Billy Bishop. Port Toronto’s focus on jets is not defensible as Billy Bishop can certainly prosper and grow as a turboprop airport, serving communities within the two hour range that can be accomplished with Toronto-assembled Bombardier Q400 aircraft.”

“We want fair and appropriate access to slots for Air Canada and other carriers to encourage real competition at Billy Bishop, similar to the situation that we find at other airports across the country where Porter has the ability to commence jet service at any time. Currently, Porter Airlines has been awarded over 85% of the slots and we are unable to serve more than one market, Montreal, despite huge demand from our customers for Ottawa, New York / Newark and other short haul markets. Moreover, if the slot growth at the airport was capped as proposed, and even if Air Canada was awarded all of these outstanding slots, it would be insufficient to allow us to commence even the most basic level of service to these new destinations. Indeed, slot caps of the sort being advanced by Ports Toronto can only benefit Porter and enhance its existing dominant position.”

“We want a terminal rates and charges methodology that is significantly lower at this facility, more in keeping with rates and charges at other airports in Canada and the United States. Our concerns have only been heightened by the infrastructure spending being considered in the context of the Master Plan. We are currently reviewing our options in this regard, as previously stated.”

“There is a tremendous opportunity for growth at this airport which is being completely ignored by the Ports Toronto management,” noted Vanstone who continued to state that “this focus on the interests of a single stakeholder is simply irresponsible when you consider that Ports Toronto is an agency of the federal government who has a mandate to operate this public asset in the public interest.”

All images above by Porter Airlines.

Bombardier (Montreal and Toronto) has made this announcement:

Bombardier Commercial Aircraft and Fly Mojo Sdn Bhd announced today (March 17) that the parties have signed a Letter of Intent (LOI) for the sale and purchase of 20 CS100 aircraft with options for an additional 20 CS100 aircraft.

The announcement was made in parallel with the Government of Malaysia’s announcement at LIMA on a new airline, flymojo, which will be based out of Johor Bahru, Johor and Kota Kinabalu, Sabah.

Upon execution of a firm purchase agreement, flymojo is expected to become the first customer and operator of the CS100 aircraft in the region.

Based on the list price of the CS100 aircraft, a firm order would be valued at approximately $1.47 billion US, and could increase to $2.94 billion US, should flymojo exercise all its options.

The flight on September 7 follows an in-depth review and analysis of the engine-related incident that occurred during stationary ground maintenance testing involving CSeries aircraft FTV1 on May 29, 2014 at the Mirabel facility. Pratt and Whitney alongside Bombardier, has taken appropriate measures to address the issue, including the modification of the engine’s oil lubrication system.

The CSeries aircraft’s entry-into-service remains on track for the second half of 2015. 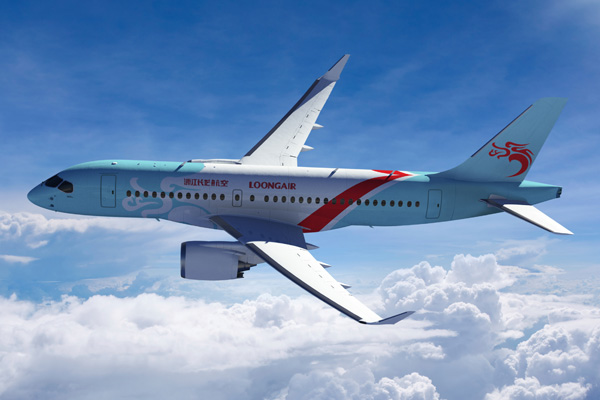 Based on the list price for the CS100 aircraft, a firm order for 20 CS100 aircraft would be valued at approximately $1.28 billion US. 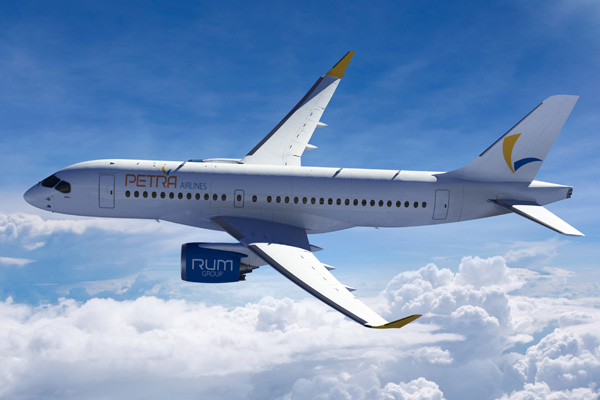 Bombardier Aerospace announced today that Petra Airlines Ltd. (Amman, Jordan) has signed a Letter Of Intent (LOI) to acquire up to four CS100 and CS300 airliners. Should the LOI be converted to a firm purchase agreement, the transaction would include two firm-ordered CS100 aircraft and two options for CS300 aircraft.

Based on list prices, a firm order for two CS100 aircraft would be valued at approximately $136.5 million US, increasing to $298.4 million if the two options for CS300 aircraft are converted to firm orders.

Petra Airlines, based at Amman’s Queen Alia International Airport, began as a charter carrier and became a scheduled airline in 2012. It serves destinations in Europe, the Middle East and North Africa.