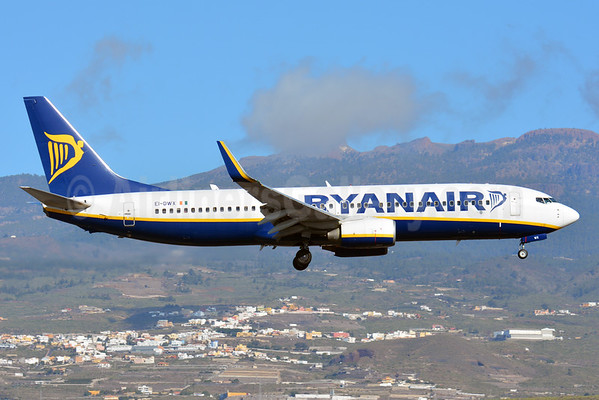 Ryanair (Dublin) today reported on its fiscal first quarter financial results. The company reported a first quarter net profit after taxes of €245 million ($271.1 million), up 25 percent from the same quarter a year ago.

“We are pleased to report strong growth in traffic and profits in Q1. Our mix of low fares, best on time performance (91% in Q1) and enhanced customer experience under our “Always Getting Better” (“AGB”) program, continues to attract millions of new customers. At the same time our focus on cost (Q1 unit costs fell 7%) enables us to pass on lower fares to customers. Q1 average fare fell 4% to just €45, due to the timing of Easter, weaker April yields and lower checked bag penetration as more families and business customers enjoy discounts on their luggage or benefit from our free 2nd carry-on bag policy.”

We continue to be inundated with growth offers from primary and secondary airports, whose incumbent carriers are cutting capacity and traffic. These new airports, along with our 72 existing bases offer significant growth opportunities as we embark on our new Boeing 737-800 program. This winter we take delivery of 31 aircraft which (net of lease returns), means our fleet will increase to 340 Boeing 737-800’s by year end.

In September we open our 6th German base in Berlin where we have a 5% share of the German market and expect to grow this strongly over the next 5 years. Gothenburg (our 2nd Swedish base) will also open in September. In November, Israel will become our 31st country served when we start flights to Eilat Ovda Airport from Budapest, Kaunas and Krakow.

Two weeks ago we decided, in the best interests of our customers and people, to close our 2 Danish bases in Copenhagen and Billund. This followed threats by the Danish Unions who admitted that they had no members among our Copenhagen pilots or cabin crew to get their members (competitor airline employees) to blockade/disrupt our flights. By moving the aircraft from Copenhagen and Billund to airports outside Denmark the unions have no legal basis for imposing these threatened disruptions, which allows us to continue to grow strongly in Copenhagen without union interference.

The year 2 rollout of AGB continues apace as we work to improve the travel experience of our millions of customers. In April we cut fees for sports equipment. In May we upgraded our mobile app to include improvements to the “My Ryanair” customer registration function which facilitates faster and easier booking of our low fares. We added Sabre as our 3rd GDS partner in June and in July we celebrated our 30th birthday with a 1m €19.85 seat sale.

We have also enhanced our Groups travel service with a dedicated groups page on http://www.ryanair.com. Ryanair joined Facebook in July, which provides another channel to communicate with, and listen to our customers. Ryanair’s campaign to “Keep Greece Flying”, under which we dropped prices on Greek domestic routes to just €4.99 one way while also cutting fares on international routes to/from Greece by 30% has been well received. Our on time performance leads the industry, and has further improved in Q1 despite the impact of the French ATC strikes, and the closure of T3 in Rome Fiumicino.

There is a lot more AGB development to come later this year, including a new personalised web site in October, new aircraft interiors, new crew uniforms and new bases.

Fuel is 90% hedged for FY16 at approx. $91 pbl and we have taken advantage of recent lower oil prices to increase our FY17 fuel hedging to 70% at an ave. rate of just under $66 pbl. This will deliver significant fuel bill savings in FY17 of up to €250m (based on current hedging). Our advantageous US$ CapEx hedging, along with our low cost eurobond financing, will help us to continue to purchase and operate aircraft at very low costs which further widens the cost advantage that Ryanair enjoys over all other EU airline competitors.

Ryanair’s balance sheet remains one of the strongest in the industry. In Q1, despite CapEx of €324m and share buybacks of €195m, our net cash increased to over €550m (from €364m in March). We have completed almost 90% of our current €400m share buyback programme which when it closes in August, will mean we have returned almost €3bn to our shareholders via special dividends and share buybacks since 2008.

On July 10, the Board of Ryanair voted unanimously to accept the IAG offer for Ryanair’s 29.8% stake in Aer Lingus. The timing of this sale is appropriate as our original plan for Aer Lingus (to use it as a mid-priced brand to offer competition at primary airports) has been overtaken by our AGB programme under which Ryanair has successfully entered many of Europe’s primary airports opening new routes and bases but offering competition and consumer choice. As the Ryanair brand develops and continues to grow strongly, the original rationale for acquiring Aer Lingus no longer exists. If the IAG offer is successful, then we would expect to receive these proceeds in mid/late September and the Board will consider our use of the proceeds around the time of our AGM.

We will continue to oppose the UK CMA’s baseless 2013 divestment ruling, (and their recent rejection of Ryanair’s request to review that decision), which was based on the invented theory that no other airline would bid for Aer Lingus while Ryanair was a minority shareholder. This has been hopelessly exposed by IAG’s current offer for Aer Lingus, even while Ryanair was its largest single shareholder.

Due to the exciting growth opportunities that exist for Ryanair’s low fares and AGB customer experience, as well as strong customer demand, we expanded our W15 business schedules which will increase our FY16 traffic target from 100m to 103m. This will be achieved through a combination of strong load factor (90%) and fewer winter groundings (approx. 40). Traffic should increase by 13% in H1 and slightly faster at 15% in H2.

Based on this Q1 performance and reasonable visibility into Q2 (which is heavily dependent on late bookings in Aug and Sept) we now believe that average fares for H1 will be broadly flat (previous guidance 0% to -2%). We have very little visibility into H2, during which we expect that our faster capacity growth (up 15%) and lower oil prices may lead to an aggressive pricing response from competitors who will try to defend their market shares. We therefore remain very cautious about weaker prices and yields this winter. Since Ryanair’s policy is to be load factor active/yield passive we expect that H2 fares will be towards the higher end of our -4% to –8% guidance range.

Our focus on unit cost continues and we expect that unit costs will fall by approx. 3% (aided by higher traffic). Fuel will deliver a saving of close to 7% and unit costs ex-fuel will be broadly flat. Ancillary revenue will be well ahead of our long term target of 20% of total revenue but will track behind the 14% growth in customer numbers in FY16.

We think it is too early in the year to alter our full year profit guidance, although the slightly better H1 yields will push it towards the upper end of our previously guided range of €940m to €970m net profit. We caution however that this guidance, which is 12% ahead of last year’s profit, is heavily reliant on the final outturn of H2 fares over which we currently have almost zero visibility. Ryanair will continue to pursue its strategy of being load factor active and yield passive for the benefit of our customers, our people and our shareholders.”