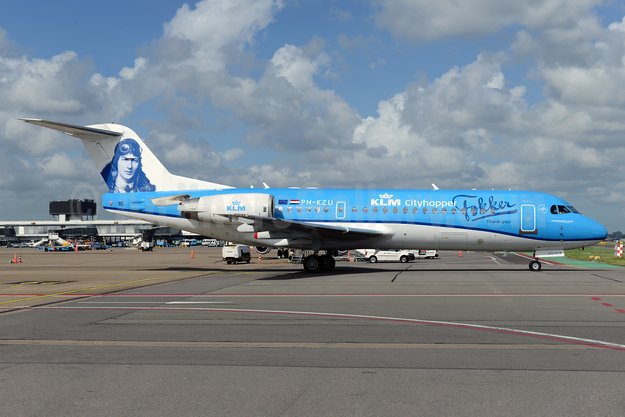 KLM Cityhopper, as planned, operated its last revenue flight of a Fokker 70. The pictured F.28 Mk. 0070 PH-KZU, decorated in the special Fokker tribute livery, operated flight KL1070 from London (Heathrow) to the Amsterdam base. The flight blocked in at 8:35 pm (2035) local time.

KLM issued this retirement story by Charley Valette on its KLM Blog:

Fokker aircraft were a common sight at Amsterdam Airport Schiphol for many decade. Although they have become increasingly scarce in recent times, this did not diminish the passion for this reliable Dutch product. Aviation buffs and plane spotter in the Netherlands all know that Fokker’s days in Dutch service will draw to a close on 28 October 2017.

On that date, KLM Cityhopper will bid farewell to its last Fokkers. The past months have seen many people booking tickets for a final flight aboard a Fokker. There were also lots of cameras along the perimeter fences, especially when one of the last Fokker 70s was specially decorated for the farewell. The accompanying text says it all: “Thank You, Fokker”.

Many readers will be familiar with the post-war Fokkers: the F27, F28, F50, F100 and F70. All of these excellent, reliable, economic aircraft were very modern in their day, but the Fokker 70 was the best of the bunch. Although Fokker only built 48 of these aircraft before it went bankrupt, the F70 paved the way towards a perfect design formula for commuter jets.

In keeping with history, KLM Cityhopper chose to operate its last Fokker flight out of the London, with an English captain at the controls. When flight KL1070 from London Heathrow shuts down its Rolls-Royce Tay engines at Schiphol, the Fokker era at KLM will come to an end. However, the special bond between KLM and Fokker will live on in memory. Looking back on this era, many of the events can be captured as “what if” questions.

What if KLM had not been allowed to operate flights to the United Kingdom with Fokkers?

KLM ordered its first Fokker aircraft in 1920, marking the start of their shared history, in which two great companies inspired each other to take great steps. However, the budding relationship between KLM and Fokker might have ended right there. In fact, Fokker/KLM administrator Albert Plesman, who later became KLM’s first CEO, included a very explicit resolutive condition in the procurement contract for the first Fokkers ordered by KLM.

Plesman did so just in case the British government would withhold permission to operate flights to the UK with Fokkers, which were seen as a mortal enemy by the British immediately after the First World War, because Germany’s dominant fleet of Fokker fighter planes were known to have prolonged the war.

Eventually, KLM was permitted to fly Fokkers to England. To make this momentous milestone all the more special, the first scheduled Fokker service to Croydon near London on 14 April 1921 was operated by a British pilot.

Another question: what if there had been no Second World War and Fokker had not been spurred on by Plesman’s claims that the company was incapable of producing a modern aircraft?

Would the aircraft manufacturer have completed the development of both the F24 and the “flying wing” Project 180, the first truly intercontinental airliner? Would KLM have operated flights to many destinations with large, aluminium Fokker aircraft for decades?

And what if the dollar exchange rate hadn’t declined sharply against the Deutschmark and Dutch guilder in the 1990s?

Could Fokker have avoided bankruptcy and profited from the recovering airline market? Would it have developed a new generation of aircraft? And would those aircraft have worn KLM colours?

Although these questions will never be conclusively answered, many things did gradually become clear for the editorial team creating the book “Dutch at Heart”, which celebrates KLM’s Fokker fleet. Based on the stories of KLM and Fokker staff as well as the curator, the bond between these two great Dutch companies is recounted from the day of establishment to the final weeks. You can order the book here: www.Fokker-70.nl.

At the end of October, Fokker aircraft will be leaving the Dutch commercial air transport scene for good. That leaves only two members of the Dutch Aviation Trinity – KLM, Fokker and Schiphol – as well as the memories of an era in which Fokker played a leading role in our industry. These memories are captured in the Fokker monument, symbolically uniting KLM, Fokker and Schiphol, which KLM Cityhopper will unveil at Schiphol Oost on 29 October 2017. 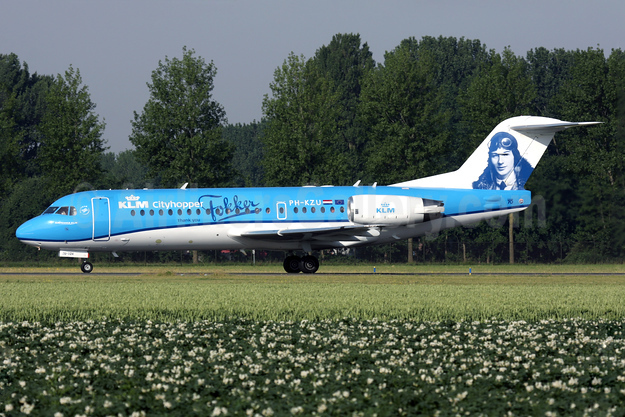 KLM wants to reflect in appropriate style on the end of the 97-year partnership between KLM and Fokker. The phasing out of the Fokker 70 at KLM Cityhopper marks the end of an extraordinary period for the Dutch airline industry.

So many KLM fans would like to be aboard one of the final Fokker flights on October 28, 2017, that we are publishing the flight schedule below.

That the very last commercial Fokker flight will depart from London is no coincidence. Soon after the first passenger flights took place on May 17, 1920, two Fokkers joined the KLM fleet as the first passenger aircraft to be owned by KLM: these Fokker IIs bore the registration numbers H-NABC and H-NABD. The first commercial flight with a Fokker II was on September 15, 1920 to London. The arrival of the Fokker 70 from London on October 28, 2017 will complete the circle.

KLM Cityhopper began replacing its Fokker fleet with the modern E-Jet, Embraer 190 and Embraer 175 in 2008. These new aircraft are facilitating further expansion of the existing network, higher flight frequencies, and lower costs. This wide-ranging modernisation means KLM Cityhopper can contribute to a more efficient and environmentally friendly operation in which quality and passenger comfort are top priorities.