Significant highlights and milestones for the quarter include:

Global Crossing Airlines Group, Inc. “GlobalX” reported its financial results for its first quarter of revenue operations which occurred in the third quarter ended September 30, 2021, including revenue of $3.1M and net operating loss of $5.26M or ($.10) per diluted share. Included in GlobalX’s operating results are an estimated $2.1 million in expense related to pre-revenue operations during the quarter, as well as approximately $750 thousand in non-recurring expenses. All dollar amounts in this press release are in United States dollars.

“WE HAD A VERY SMOOTH ENTRY INTO REVENUE OPERATIONS AND THE GLOBALX TEAM HAS PERFORMED EXCEEDINGLY WELL,” SAID ED WEGEL, CHAIRMAN AND CEO OF GLOBALX. “DURING OUR FIRST SEVEN WEEKS OF OPERATIONS WE OPERATED MORE THAN 150 REVENUE FLIGHTS, AND APPROXIMATELY 400 BLOCK HOURS, FOR NEARLY A DOZEN CUSTOMERS.”

“ON AUGUST 30TH, WE RECEIVED OUR FINAL AUTHORITY FROM THE US DEPARTMENT OF TRANSPORTATION TO FLY INTERNATIONAL CHARTERS. THIS ENABLES US TO FLY TO THE CARIBBEAN, MEXICO, LATIN AMERICA, AND CANADA. WE CAPITALIZED ON THAT AUTHORITY BY IMMEDIATELY EXECUTING ON INTERNATIONAL CONTRACTS, AND WE HAVE BEEN CONTINUING TO EXPAND OUR INTERNATIONAL CLIENT BASE.”

MR. WEGEL FURTHER ADDED: “NOW THAT THE FAA CERTIFICATION IS BEHIND US, OUR FOCUS IS ON DELIVERING EXCEPTIONAL CUSTOMER VALUE, WHILE SCALING THE AIRLINE TOWARDS PROFITABILITY. WE ARE EXTREMELY ENCOURAGED ABOUT THE DEMAND FOR OUR PRODUCT OFFERING AS WELL AS OUR GROWING PORTFOLIO OF CUSTOMERS.”

Flights in the third quarter of 2021 totaled 378 block hours with revenue of $3.1M, both of which were zero for the same period in 2020. Operating losses during the quarter were driven by the investments necessary to achieve FAA certification and limited number of aircraft. During the quarter GlobalX operated two Airbus A320s and one Airbus A321 aircraft for 91 total combined days available for sale.

GlobalX ended the quarter with $8.9 million in cash and restricted cash.

Looking ahead, GlobalX projects strong demand for its services and a resulting increase in revenue block hours in the fourth quarter of 2021. GlobalX will seek to continue to increase its flight activity to Cuba and the Dominican Republic, as well as flights on behalf of the US Government agencies, US-based hotel and casino operators, and for college football team clients (including NCAA football bowl game flights). GlobalX is accepting delivery of three aircraft in the coming weeks and expects to have as many as 6 aircraft operating by the end of the year. This will result in an estimated 270% increase in total combined aircraft days available for sale in the fourth quarter versus third.

Commenting on the results, Mr. Wegel stated: “We believe we are now developing a strong foundation for our airline, with a strong team of airline professionals, and we are well positioned going into 2022.”

GlobalX is a US 121 domestic flag and supplemental airline flying the Airbus A320 family aircraft. GlobalX flies as an ACMI and wet lease charter airline serving the US, Caribbean, and Latin American markets.

The arrangement is the first between the two companies since GlobalX completed the spin out of Canada Jetlines in June 2021 to shareholders. Under the terms of the arrangement, Canada Jetlines Vacations will jointly market and sell seats on GlobalX public charter flights over a six-week period. Round trip charter flights are expected to operate from Toronto to Miami and Fort Lauderdale weekly beginning in March 2022.

The parties are targeting that tickets will go on sale in December 2021, pending receipt of all final regulatory approvals including approval from, and completion of Canada Jetlines Vacation registration with, the Travel Industry Council of Ontario (TICO).

Flights will be operated on GlobalX Airbus A320 aircraft.

Canada Jetlines intends to start operating flights to Florida with its own A320 aircraft once it has completed its certification and receives all required government approvals.

In other news, GlobalX also announced on November 15 it commenced operations for Havana Air:

Global Crossing Airlines Group, Inc. and ViajeHoy, LLC, d/b/a Havana Air (Havana Air) are pleased to announce that they have commenced scheduled charter service from Miami and Tampa to Havana.

Both GlobalX and Havana Air plan for the number of flights to increase as Cuba fully opens post-pandemic.

On September 30, 2021, US DOT approved the GloablX fleet size increase to 6 aircraft, subject to FAA approval as each enters service. N279GX (below) entered revenue service on October 1, 2021. N278GX entered service at the end of October bringing the fleet to 4. Two additional A320s will enter service within 60 days growing the fleet to 6. 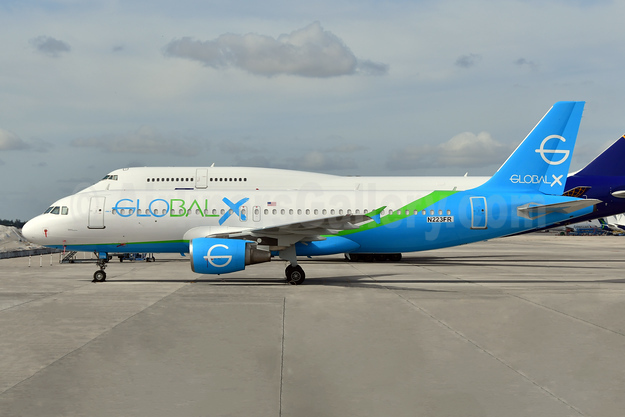 GlobalX (Global Crossing Airlines) (Miami) is the new airline venture of Ed Wegel (below, with his wife) formerly of the second version of Eastern Air Lines.

The new airline is proposing to commence passenger charter operations with a single, leased, Airbus A320. GlobalX will offer this aircraft, and a second aircraft scheduled for delivery later in 2021, for public and private passenger charters in domestic and foreign markets.

The company is in the process of obtaining its AOC.

Global Crossing Airlines Group, Inc., operating as “GlobalX”, on January 19, 2021 announced it took delivery of its first Airbus A320 aircraft, marking the beginning of the new passenger and cargo airline. 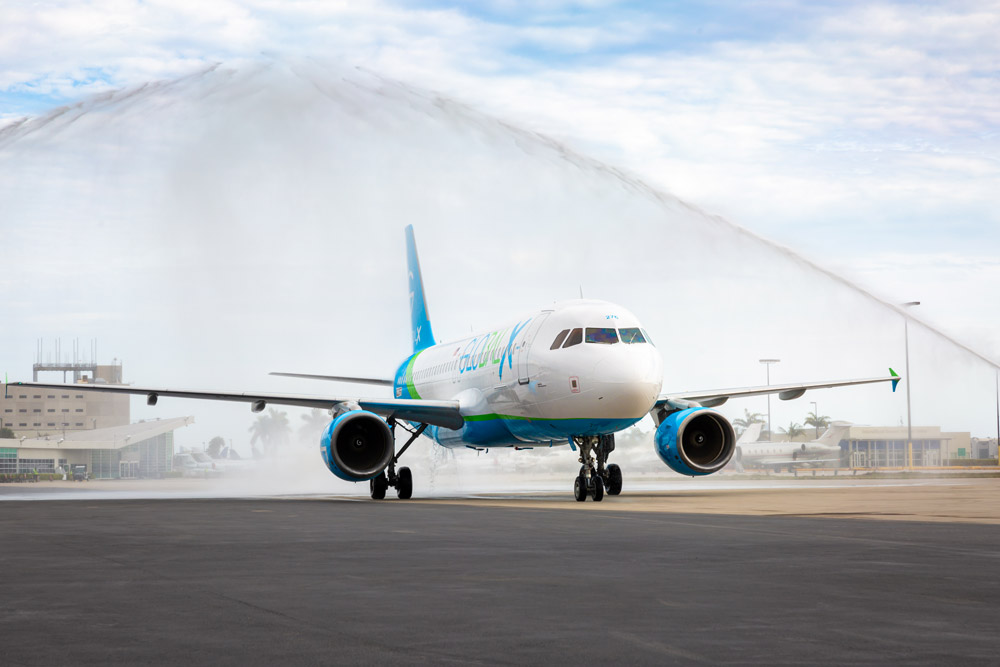 “WE ARE THRILLED TO TAKE DELIVERY OF OUR FIRST A320 AIRCRAFT HERE AT OUR BASE AT MIA. WE ARE BUILDING OUR AIRLINE AROUND AIRBUS WITH THE A320 AND 321 IN PASSENGER CONFIGURATION, AND LATER THIS YEAR WITH THE FIRST OF MANY A321 CARGO AIRCRAFT. WE HOPE TO OPERATE THE AIRBUS A330 AIRCRAFT AS WELL. TODAY IS A TESTAMENT TO THE OUTSTANDING WORK OF THE GLOBALX TEAM AS WE CONTINUE TO CERTIFY AS A US FLAG CARRIER,” SAID ED WEGEL, CHAIRMAN AND CEO.

The aircraft arrived at its new base, Miami International Airport, on Sunday afternoon and was welcomed with a ceremonial water cannon salute upon landing. This marks the first delivery of two aircraft scheduled for the first quarter of 2021.

Thank you for helping us get to this milestone moment, and we look forward to taking flight in 2021! // #globalx @iflymia pic.twitter.com/TUeU4E9y2j

GlobalX’s first A320 aircraft came freshly painted in its signature blue and green livery. The aircraft comfortably accommodates 180 passengers in an all Economy Class configuration, and features a large cargo hold capable of accommodating generous passenger baggage allowances. Upon completion of its FAA certification which is expected by late first quarter 2021, the A320 aircraft will immediately begin passenger charter operations throughout the United States, Caribbean, and Latin America.

GlobalX will provide charter airlift for major airlines, tour operators, professional and collegiate sports teams, casinos, and corporate groups. It will also operate direct to consumer charters under its own Part 380. The airline will operate from two bases at Miami International Airport (MIA) and Atlantic City International Airport (ACY).

GlobalX is a new entrant airline now in FAA certification using the Airbus A320 family aircraft. Subject to FAA and DOT approvals, GlobalX intends to initially fly as an ACMI and wet lease charter airline serving the US, Caribbean, and Latin American markets.

The new entrant describes its activities:

Global Crossing Airlines, doing business initially as Global X in the United States, will be an affiliated group of airlines operating both narrow and widebody aircraft in mature and emerging growth markets around the world, utilizing the efficiencies of an Airbus A320/330 fleet, and centralized purchasing, planning and management. The Global family will incorporate all that has been learned about charter, low cost scheduled and long haul low fare operations.

Global X is the first airline, now being certified in the US as a part 121 domestic and flag carrier airline using the Airbus A320. Global X will operate wet lease and ACMI flights for airlines and charter operations for tour operators, professional and college teams and other groups requiring a 150 seat aircraft capable of flying up to six hours. Global X plans to grow to a fleet of ten (10) to fifteen (15) A320 aircraft and will then add wide body A330 aircraft to our FAA certificate, to provide dual capability and optionality to our clients in long range charter and ACMI/wet lease operations.

GlobalX has signed with Vallair for lease of ten (10) Airbus A321 freighters:

Global X is led by a strong and highly experienced 119 team – the five (5) mandated positions of Director of Operations, Maintenance, Quality and Safety and the Chief Pilot have over 150 years of commercial aircraft operating experience. Our Director of Maintenance was the co-founder and Director of Maintenance for the certification of Virgin America, our Director of Safety was the FAA’s subject matter expert and wrote much of the SMA (Safety Management System) policies and procedures, our Chief Pilot has operated many aircraft types including the 747 in worldwide charter operations, our Director of Operations has flown narrow body aircraft worldwide for over 20 years and our Director of Quality served in the same position for Delta Airlines and has been an FAA Principal Inspector for the past ten years.

Future Global Crossing operations are planned for Ecuador and Canada.