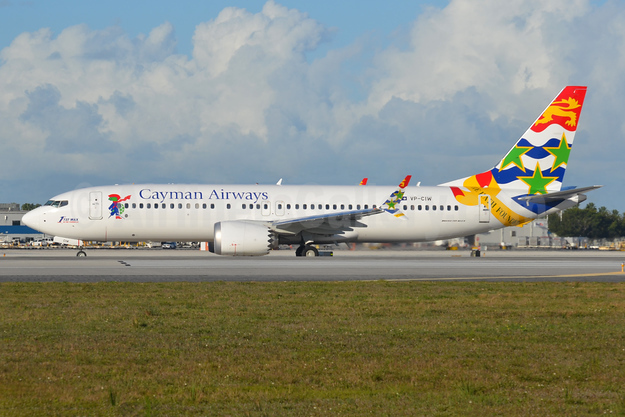 Cayman Airways Limited (CAL), in partnership with the Ministry of Tourism & Transport, and the Cayman Islands Department of Tourism (DOT), is pleased to announce the resumption of its nonstop Boeing 737-8 MAX 8 jet service between Grand Cayman and New York (JFK) on Thursday, December 16, 2021.

In other news, the last remaining two jet aircraft from Cayman Airways’ Boeing 737-300 fleet have officially been retired from service to the Cayman Islands, marking another milestone in the National Airline’s current Fleet Modernization Plan – a plan that positioned Cayman Airways as having the newest jet fleet in the Caribbean after achieving the historic accolade in 2018 of being the first Caribbean-based airline to operate brand new state-of-the-art Boeing 737-8 aircraft.

Cayman Airways had operated 737-300 aircraft for three decades, with the last remaining aircraft, VP-CKW and VP-CKZ, being retired on October 18, 2021 and October 25, 2021 respectively.

Everyone in attendance got the unique opportunity to write farewell messages and sign their names on the nose of VP-CKZ. Both farewell flights were flown by Captain Perry Panton and First Officer Geoffery Connolly to the Southern California Logistics Airport in Victorville, California, where they will be stored pending sale. After take-off, Captain Panton circled the aircraft back around for an approved fly-over and final salute to the Cayman Islands.

Interesting facts about each aircraft include:

Cayman Airways took formal delivery of its new Boeing 737 MAX 8 aircraft from Air Lease Corporation (ALC) on November 28, 2018 at a ceremony in Seattle hosted by Boeing to mark the occasion.

“This year, as we celebrate 50 years of safe and reliable service, we take great pride in introducing the first Boeing 737-8 MAX 8 to our fleet,” said Fabian Whorms, President and CEO of Cayman Airways. “Over the next 20 months, we will be adding three additional MAX 8 aircraft while retiring our existing Boeing 737-300 jet fleet. Following a competitive public tendering process, the unique lease structure and terms offered to Cayman Airways by ALC, has afforded Cayman Airways the ability to be the first 737-8 MAX 8 operator based in the Caribbean, and we look forward to a strong working relationship with ALC.”

“In 2014, we purchased our 737-300s as the first step of our fleet modernization plan. That purchase was made with the expectation to retire those aircraft within 3-5 years and the aim of replacing them with a new fleet capable of cutting fuel consumption and maintenance costs, while offering greater opportunities for revenue growth and enhanced customer experience,” said Philip Rankin, Chairman of the Cayman Airways Board of Directors.

“In 2016, our business case demonstrated that the Boeing 737 MAX 8 was the preferred aircraft, but was expected to be out of reach financially. However, the unique terms and pricing of the successful proposal from ALC made these aircraft a logical replacement choice for our retiring Boeing 737-300s compared to any other available mission-suitable aircraft, be it new or used.”

As part of its fleet modernization plan, Cayman Airways is replacing its four 737-300 aircraft with the MAX 8, offering 30% more seating capacity while achieving up to 30% savings in fuel costs.  The airplane incorporates the latest technology CFM International LEAP-1B engines, Advanced Technology winglets, and other airframe enhancements to improve performance and reduce operating costs.

The new Boeing 737 MAX 8 is expected to arrive on Grand Cayman on November 30, 2018 around 4:30 pm, where there will also be a customary celebration for its arrival.

Boeing also made this announcement:

Boeing and Air Lease Corporation delivered the first 737 MAX 8 for Cayman Airways. The first 737 MAX to enter service in the Caribbean marks the beginning of the airline’s plans to modernize its fleet and expand its network.

Cayman Airways plans to take delivery of four MAX 8 airplanes to replace its fleet of 737 Classics.

Compared to the 737-300, the MAX 8 offers 30 percent greater seat capacity, and a more than 30 percent improvement in fuel efficiency per seat. The MAX achieves the higher levels of performance with the latest technology CFM International LEAP-1B engines, Advanced Technology winglets, and other airframe enhancements.

To prepare for their new 737 MAX, Cayman Airways will train pilots at Boeing Global Services’ Miami training campus. Under this agreement, Cayman will use Boeing simulators for its entire 737 fleet including 737 Classics and Next-Generation 737s.

The 737 MAX family is the fastest-selling airplane in Boeing history, accumulating about 4,800 orders from more than 100 customers worldwide. Boeing has delivered more than 200 737 MAX airplanes since May 2017.