For the 15th edition of the world’s best music festival, 400,000 partygoers from over 200 different countries will unite in Boom for two weekends of Tomorrowland, this year in theme of ‘The book of wisdom – the return’. In no time, Brussels Airlines sold 13,083 flight packages to partygoers flying to Belgium, adding up to 25,290 Tomorrowland passengers on 293 Tomorrowland flights. 56 flights are transformed into #TMLpartyflight (s) with music on board. On eleven other flights, a DJ plays a live set at 30,000 feet. For the first time, the airline also organizes transatlantic party flights, leaving in Washington, where Tomorrowland goers from all over America get together to travel to the festival.

To get the party people in the right atmosphere right from the start of their journey, 16 airports organize a gate party with a live DJ before the flight. Departing from 77 different airports, Brussels Airlines welcomes Tomorrowland guests with 107 different nationalities with as a top five Spanish, Swiss, British, Swedish and German.

For the third time, Amare will bring guests from all over the world to Tomorrowland. Amare is one of Brussels Airlines’ six Belgian Icons, an Airbus A320 dedicated to Tomorrowland. The aircraft has an impressive special painting featuring a giant eagle as well as mood lighting and a Bose music installation on the inside.

To offer its guests a carefree trip home after an fantastic Tomorrowland experience, Brussels Airlines has set up a mobile bag drop-off desk at the DreamVille camping.

“In recent years, we’ve seen that many festivalgoers still leave their tents and camping chairs behind as they don’t want to carry the heavy load with them. Especially if they still have a long journey in front of them. With the bag drop-off at DreamVille, Tomorrowland guests who fly home check in their bags for their flight right at the campsite and don’t have to carry their luggage and tents to the airport. This way they can enjoy a nice day of sightseeing in Belgium. It should at the same time help reduce the amount of tents and camping gear left behind.”

Next to the bag drop off, Brussels Airlines also hosts a service desk at the festival site for its guests to be able to change their flight or have any information about their journey right on the spot. Like every year, Brussels Airlines invites everyone to take a free ride on her giant Ferris wheel at the festival site, this year baptized Amare, offering a stunning view over the Tomorrowland landscape and beyond.

Brussels Airlines and Tomorrowland started their collaboration in 2012. Together they created Global Journey, offering international music fans packages that combine the festival with both transport and hotel or camping stay. That year, the airline organized 25 party flights.

In 2017, Brussels Airlines revealed Amare, an aircraft dedicated to the festival with a Tomorrowland themed livery on the outside and special light and sound effects creating a Tomorrowland experience on the inside. 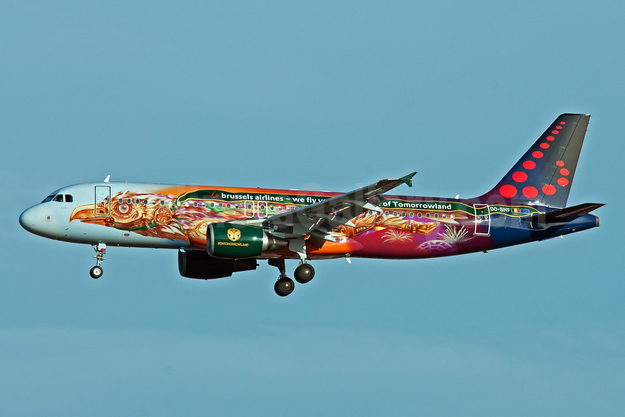 Amare, an ode to Tomorrowland, was welcomed on February 23, 2017 as the fourth Airbus A320 in our Belgian Icons series (following “Rackham”, “Magritte” and “Trident”).

Since 2012, Brussels Airlines and Tomorrowland have been bringing people together from around the world to Belgium. And that is exactly what Amare will continue to do. It is now on a mission to unite “the People of Tomorrow”, so as to gather fine memories and create lasting friendships.

The pictured OO-SNF will wear this special livery until 2022.