Loftleidir Icelandic, a subsidiary of Icelandair Group, will, together with Icelandic investors, submit a binding offer for a 51% of the shares in Cabo Verde Airlines on Cape Verde.

The agreement also aimed to strengthen the international airport in Cape Verde, to develop the islands as a promising tourist destination and to build an international hub for connecting flights. Coinciding with the agreement, it was announced that the company was due to be privatised. Cabo Verde Airlines already has operating licenses to fly scheduled flights to Europe and the United States.

“The participation in the acquisition of a majority share in Cabo Verde Airlines holds great opportunities for Loftleidir Icelandic, especially in light of the expected growth in passenger demand in Africa in the coming years. We have already participated in the restructuring of the company, and Cabo Verde Airlines’ operations are well suited to Loftleidir Icelandic’s projects around the world. The knowledge and experience already available within Loftleidir Icelandic and its sister companies has come to good use in restructuring the company and will continue to assist in further developments. Further opportunities are related to shared use of airplanes from Icelandair Group’s fleet, and crews where applicable, as is already being done in various projects. In developing connecting routes, we can also draw further on Icelandair’s experience. In the case of Cabo Verde Airlines, we have opportunities for well-organized connecting routes between Europe and South America on one hand, and West Africa and North America on the other, along with West Africa and Europe. The island’s location is ideal for developing connecting flights.” 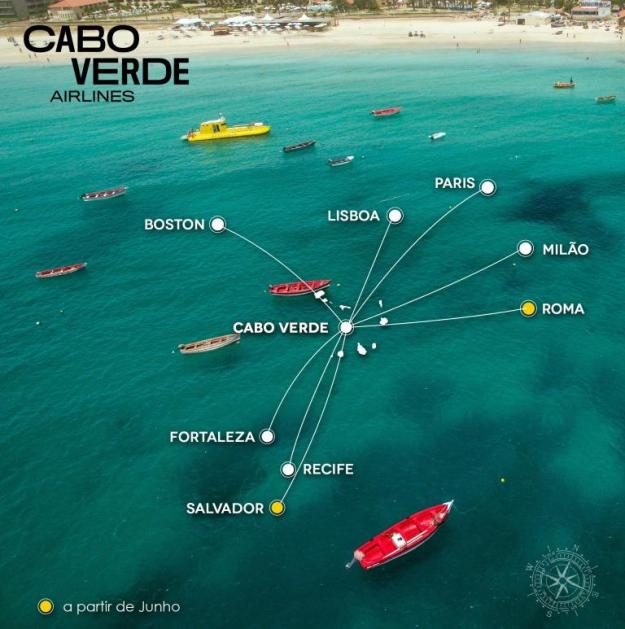 Transportes Aereos de Cabo Verde (TACV), announced the start of service from T. F. Green Airport (PVD) to the Cabo Verde Islands beginning June 2, 2015. The airline will offer two weekly flights on 210-seat Boeing 757-200 aircraft to the city of Praia on the island of Santiago on Tuesdays and Fridays through June 30 and will add a third weekly flight on Wednesdays during the peak travel season of July through early September. Additionally, connecting service will be available to other Cabo Verdean islands: Fogo, Sao Vicente, Sal and Boa Vista.

Located about 300 miles off the coast of Senegal, Cabo Verde is renowned for its natural beauty, picturesque beaches, and “morabeza” (Creole for hospitality) of its people. The islands that make up the arrow-shaped archipelago today were discovered and colonized by the Portuguese in the 15th century. Cabo Verde gained independence in 1975 and remains one of Africa’s most stable democratic governments. Both Portuguese and Creole are spoken by many of the 450,000 Cabo Verdeans who call the island nation home.

Copyright Photo: Antony J. Best. One Boeing 757-200 will be retained for the Boston route and may be replaced with a larger in Boeing 767 in the future. Please click on the photo for additional information.

TACV-Cabo Verde Airlines (Praia) yesterday (December 4) performed a test flight with a Boeing 757-200 at the new Sao Pedro Aiport on Sao Vicente. The new airport is being certified for operations.