The FAA alleges that Rhoades:

Rhoades Aviation has 15 days to respond to the FAA after receiving the agency’s enforcement notice.

NTSB issued this report and photo:

Both flight recorders and all major components of a cargo jet have been successfully recovered from the Pacific Ocean, the National Transportation Safety Board announced Tuesday. The recorders and wreckage recovered were from a Boeing 737-200 freighter, operated as Transair flight 810 when it was ditched after the flight crew reported anomalies in both engines shortly after takeoff from Daniel K. Inouye International Airport, Honolulu, Hawaii, on July 2, 2021. The two pilots, the only occupants onboard, survived. The wreckage came to rest on an ocean shelf at a depth ranging from 350-450 feet.

“The recovery of the recorders and virtually the entire airplane represents a major step forward in the investigation,” said NTSB Chair Jennifer L. Homendy. “We are so appreciative of the collaborative efforts of the federal and state agencies, parties and contractors that contributed to this successful outcome.”​

Four of the six cargo containers remained in the aft section of the fuselage; the other two containers were found separate but near the wreckage. A pallet of cargo was found during the initial search operation.

In the months following the accident, TransAir’s insurance provider contracted with several companies to recover the wreckage and cargo. These included the Eclipse Group, which operates the Bold Horizon, a San Diego-based research vessel equipped with a remotely operated vehicle (ROV) and other underwater retrieval equipment. A California-based barge, the Salta Verde, was contracted to lift the two sections of the fuselage and transport them to shore in Honolulu.

On the morning of Oct. 12, the Bold Horizon left port in Honolulu for the recovery site with two NTSB investigators, two engineers from Boeing and a team of recovery specialists. After the ROV was used to rig the engines with cables and front landing gear assembly with a strap, all three items were recovered and brought to shore on Oct. 17.

The Bold Horizon set off again on Oct. 18 to recover the fuselage. The forward section of the fuselage, which measures 37 feet long and weighs about 15,500 pounds, was recovered to the barge on Oct. 20 and brought to shore at Barbers Point in Kapolei, Hawaii, on Oct. 22.

The aft section of the fuselage is about 63 feet long and weighs about 48,500 pounds empty and about 60,500 pounds with the four cargo containers. It was significantly larger and more challenging to lift than the forward section of the fuselage. After engineers and ROV operators rigged it so the wings and tail would not separate during the lift, the fuselage was recovered to the surface and placed on the barge on Oct. 30 and brought onshore at Barbers Point on Oct 31.

Cargo and some smaller components of the airplane were also recovered.

Throughout the course of the recovery operation, the NTSB coordinated efforts with state and federal agencies, including the Hawaii Department of Health; Hawaii Department of Land and Natural Resources, Division of Aquatic Resources; and the National Oceanic and Atmospheric Administration, to ensure that any adverse effects on the environment or sea life were minimized.

In addition, a protected species observer was aboard to monitor for encounters with Endangered Species Act-listed species, including false killer whales, Hawaiian monk seals, and sea turtles. No endangered species were encountered during the operation.

The flight data recorder and the cockpit voice recorder will be transported to the NTSB laboratory in Washington where they will be cleaned, dried, downloaded and analyzed.

Investigators will perform a detailed documentation of both sections of the fuselage, which will remain in Hawaii.

The engines were documented, crated, and will be returned to the barge Salta Verde to sail back to the mainland where each will undergo a teardown examination supervised by an NTSB investigator.

The investigation, which is expected to be completed in 12-24 months, will include a comprehensive examination of the airplane structure, engines, systems, maintenance, survival factors, vehicle performance, air traffic control, human factors, federal oversight and emergency response.

The National Transportation Safety Board has scheduled a media briefing on Saturday, Oct. 9, in Honolulu to detail the NTSB’s coordination of the operation to recover the wreckage of a Boeing 737 cargo jet off the ocean floor.

NTSB Senior Air Safety Investigator, Lorenda Ward, will brief the media on the purpose and scope of the operation, the vessels, equipment and staffing involved, how the operation will be accomplished and the expected timeline for completion. Ms. Ward will take questions following her prepared remarks. The briefing will be held outdoors.

The wreckage being recovered is a Boeing 737-200 freighter (Boeing 737-275C N810TA, msn 21116) (above), operated as TransAir flight 810 when it was ditched in Mamala Bay shortly after takeoff from Daniel K. Inouye International Airport, Honolulu, Hawaii, on July 2, 2021. Both pilots, the only two occupants onboard, survived. The wreckage came to rest on an ocean shelf at a depth ranging from 350-450 feet.

The NTSB previously made this announcement:

The National Transportation Safety Board is sending a team of investigators to the ditching site of a Boeing 737 cargo jet off the Hawaiian island of Oahu to coordinate the recovery of the wreckage from the ocean floor.

Rhoades Aviation Inc, dba TransAir Flight 810, a Boeing 737-200 bound for Kahului, Hawaii, on July 2, reported anomalies in both engines and subsequently ditched into Mamala Bay shortly after takeoff from Daniel K. Inouye International Airport, Honolulu, Hawaii. The two pilots escaped from the wreckage and were rescued by the U.S. Coast Guard and the Honolulu Airport Aircraft Rescue Fire Fighting Unit.

“The wreckage of TransAir flight 810 contains important investigative information, including that captured by the flight data recorder and the cockpit voice recorder,” said NTSB Chair Jennifer L. Homendy. “Having access to the recorders, the engines and other components will be critical to understanding not only how this accident occurred, but how future accidents might be prevented.”

​The fuselage broke into two pieces: the aft section with the wings and tail attached, and the forward section that includes the cockpit. Both engines separated from the wings at impact. All the wreckage is on an ocean shelf at a depth ranging from 350 to 450 feet. The site is about two miles from Ewa Beach in Honolulu.

TransAir’s insurance provider contracted with several companies to bring the wreckage and cargo to the surface. The major equipment involved in the recovery operation will be a research vessel with remotely operated vehicles (ROV) and a barge equipped with a crane.

Although there was an initial underwater survey done shortly after the ditching to confirm the location and disposition of the wreckage, the team will conduct another survey with the ROVs to determine if there have been any changes to the orientation of the wreckage.

Following the survey, the ROVs will be used to rig each of the engines and fuselage sections and brought to the surface.

The flight data recorder and cockpit voice recorder are located in the aft fuselage of the airplane and will be recovered after that section is brought to the surface. The recorders are of particular interest to investigators because of the flight and cockpit information they can provide about the performance and operation of the airplane. The recorders will be transported to the NTSB Recorder Laboratory in Washington, D.C., where they will be downloaded for analysis.

NTSB investigators will document the wreckage in Honolulu before the engines and other selected components are crated and shipped to facilities on the U.S. mainland for further examination and testing.

The entire recovery operation is expected to take 10 to 14 days, depending on the weather and other factors.

The NTSB investigator-in-charge will hold a media briefing in Honolulu on Oct. 8 to provide additional information and further details about the recovery operation. The location and time of the briefing will be announced the week of Oct. 3. 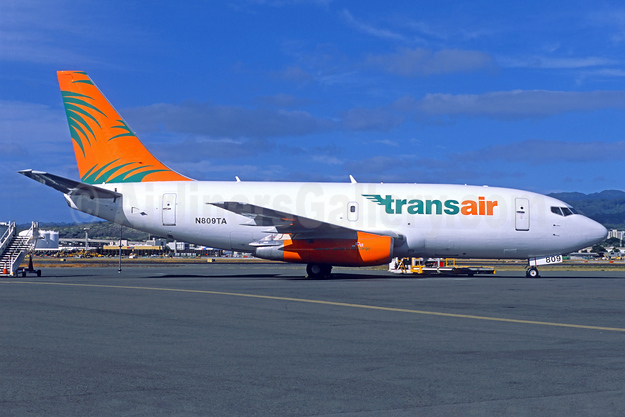 Transair, operated by Rhoades Aviation, which operated the Boeing 737-200 that ditched in the Pacific Ocean near Honolulu on July 2 has been grounded by the FAA.

The FAA has been looking into the maintenance and safety practices of Transair’s parent company, Rhoades Aviation, since the fall of 2020.

The FAA notified the company that it could no longer conduct maintenance inspections, in effect, grounding the remaining Transair Boeing 737-200s.

The National Transportation Safety Board’s investigation of the crash of Transair flight 810 on July 2, 2021 continues as investigators continue to gather information and evidence.

Rhoades Aviation Inc., dba Transair, flight 810, a Boeing 737-200 (N810TA), ditched in the waters of Mamala Bay near Honolulu, shortly after takeoff from Daniel K. Inouye International Airport, Hawaii. Flight 810 was operating under Title 14, Code of Federal Regulations, Part 121, as a cargo flight bound for Kahului International Airport, Kahului, Hawaii. Both members of the two-person flight crew were injured and were rescued by the U.S. Coast Guard and Honolulu Fire Department. The airplane was substantially damaged and sank.

The NTSB’s investigation began Friday with the arrival in Hawaii of several investigators. The remainder of the NTSB’s Go Team arrived late afternoon Saturday.

The NTSB conducted an organizational meeting Saturday evening with the parties to the investigation which include:

The team is also supported by NTSB specialists in Meteorology and Airports who are working from the NTSB’s headquarters.

A small amount of floating debris was recovered and taken to Coast Guard Air Station Barbers Point, where it was examined by NTSB investigators.

Before the cockpit voice and flight data recorders can be recovered, the exact location of the plane on the ocean floor must be determined. Investigators plan to use side scan sonar Monday to survey the debris field, the condition of the airplane and its location, including how far beneath the surface the plane sank. That information will be used to determine how and when the recorders could be recovered and then how and if the airplane will be salvaged.

In general terms, NTSB investigators develop factual information in three areas: the people involved in an accident, the equipment involved in the accident and the environment in which the accident occurred. ​

The NTSB has released the following photos of the aircraft that broke apart on ditching:

After departure from HNL, the crew was forced to ditch in the Pacific Ocean as it was attempting to return to the airport. The crew reported an engine failure and was having difficulty maintaining altitude when it ditched.

The two crew members were rescued at sea.

The airframe was originally delivered to Pacific Western Airlines as C-GDPW on October 10, 1975.

The company has been operating since 1982.

Transair (Honolulu) is getting ready to take delivery of its first Boeing 737-200C freighter for its inter-island cargo network in Hawaii. Boeing 737-2T4C N306AL (msn 23066, ex XA-RCB) was formerly operated by Regional Cargo of Mexico. The new addition is being prepared in California for the delivery flight across the Pacific to Hawaii.