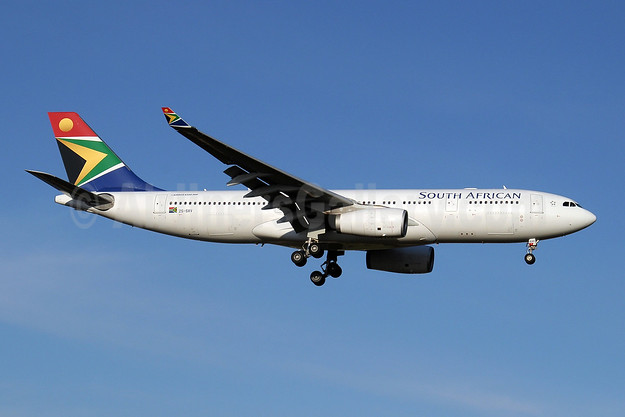 South African Airways is taking drastic steps to reduce losses and turn around the flag carrier. The airline will continue to cut or reduce loss-making routes. SAA will also continue to transfer aircraft to lower-cost subsidiary Mango.

The airline has issued this statement:

The board and management of South African Airways are taking urgent steps to address issues raised by the Auditor-General’s office in its 2016-17 audit report, and remains optimistic about the airline’s future.

“The board of SAA has noted and accepted the Auditor General’s report,” says CEO Vuyani Jarana. “The majority of the airline’s operations are sound, and we are building on this to ensure we break the loss-making cycle and transform the airline into a viable and sustainable entity.

“The board has developed and approved a clear strategy and five-year plan to turn the airline around, and we are working closely with the board and the shareholder to ensure we succeed.

“SAA has had many previous turnaround strategies which have not been implemented before. This time it is different: we believe the vision outlined by the board is absolutely correct, and are committed to ensuring it is put into practice.

“We need a clean break with the past and a new approach to the future, and that is precisely what we are doing. We are acting with urgency to ensure the viability and sustainability of this crucial national asset,” says Jarana.

Jarana points out that the AG’s report was the first since the Auditor General was appointed as SAA’s auditors, having been appointed as part of the airline’s commitment to audit firm rotation. The report released last week covers the financial year ending March 2017, and Jarana says it has “provided a fresh pair of eyes, particularly as the team went a number of years back where required to establish an appropriate baseline.”

“The AG has given us a comprehensive diagnosis into key areas of our business and this has provided deep insights which will contribute to a fit for purpose group of businesses.”

However, a number of significant steps have already been taken as part of the turnaround strategy, with the clear aim of taking SAA to profitability in the medium-term.

The five-year plan and strategy require support and funding by the shareholder. The board and the shareholder are currently evaluating the appropriate terms for such support.

The immediate focus of the strategy is on liquidity management, balance sheet restructuring, cost management as well as revenue optimisation, which are intended to stem the losses and drive profitability.

Key steps already taken include:
·       Improving governance by strengthening the board and its structures.
·       Injecting R10-billion capital into SAA to improve its balance sheet.
·       Addressing the leadership vacuum by filling key executive vacancies.
·       Bringing in a depth of aviation skills by hiring the Chief Restructuring Officer (CRO).
·       Implementing key market-facing initiatives aimed at stopping ongoing losses.

Furthermore, network optimisation has been implemented on the domestic, regional, and international route network to improve yields.

The London route will be served by an upgraded product and reduced to a single daily service.

These network changes are necessary as SAA’s route network remains under intense scrutiny with clear defined minimum profit margin target at route and network level. A change hub has been setup as command centre for implementation of the change initiatives.

“However, it is important to note that SAA has never been properly capitalised, and any company has a defined maximum debt capacity beyond which debt becomes a burden. We need to do more and work closely with the shareholder to find lasting solutions that will materially improve SAA’s equity position,” says Jarana.

“We can assure our suppliers, creditors, customers, trade partners and the rest of our stakeholders that the shareholder, the board and management are doing everything practically possible to address SAA’s financial status and to transform the airline’s financial, commercial, and strategic position.

“The board and shareholder are determined to build a financially sustainable airline,” concludes Jarana.

Copyright Photo: TMK Photography/AirlinersGallery.com. Airbus A330-243 ZS-SXV (msn 1249) arrives at the Johannesburg base.