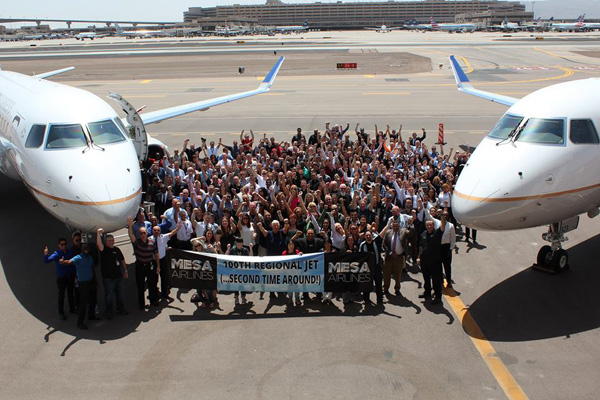 Mesa Airlines (United Express) (Phoenix) yesterday (April 15) celebrated the arrival at its Houston base of its 100th regional jet (the second time around) dressed in United Express colors.

The airline issued this statement and photo:

Employees of Phoenix-based Mesa Airlines celebrated the arrival of the company’s 100th regional jet at its Phoenix hangar on April 15. The 76-seat Embraer E175, new from the Embraer factory in Brazil, was greeted by hundreds of Mesa employees who enjoyed lunch and tours of the new aircraft.

Mesa Airlines is currently the fastest growing airline in the country with long-term partnership agreements with American Airlines and United Airlines. Mesa operates under the American Eagle and US Airways Express brands from hubs in Phoenix and Dallas/Fort Worth and as United Express from Washington Dulles and Houston George Bush Intercontinental Airport. Mesa’s previously announced aircraft deliveries will bring the fleet total to 115 by the end of 2015. The company is hiring all positions including pilots, flight attendants and mechanics in locations across the country including Phoenix, Dallas/Fort Worth, Washington Dulles, Houston and El Paso.