July is the only month in which each day is a part of Delta’s busy summer schedule. So as July wraps up – and with 17 days remaining in the summer schedule – here are nine amazing facts to keep in mind the next time you see a Widget-branded aircraft soaring overhead.

1. July 31 set an all-time single-day bookings record of more than 620,000 customers. That’s as if the entire population of Portland, Oregon, booked to fly Delta in one day.

3. Reliability on Delta Connection – the airline’s group of regional carriers – is dramatically improving: there have been 1,400 fewer Delta Connection cancellations this summer compared to the same period last summer.

4. The Delta system’s “completion factor” – days without any canceled flights – is 99.02%, 0.44 percentage points better than the same period last summer. That’s an amazing 1,308 fewer cancels than in summer 2014. And it includes both mainline flights and Delta Connection.

6. Twenty-one days of 100 percent mainline completion factor so far in summer 2015, compared with 12 during the same time period in 2014.

In other news, Delta is revamping its Airbus A319 (above) and A320 fleets:

Delta will debut its latest single-aisle jet to receive a nose-to-tail interior modification this week—the first of 57 Airbus A319s to receive the state of the art upgrade.

The 132-seat aircraft is the latest in a series of upgrades coming to Delta’s domestic narrowbody fleet and follows just a few short months after Ship 3235 rejoined the flight line.

Panasonic in-flight entertainment at every seat (above), large pivoting overhead bins capable of accommodating 60 percent more carry-on bags (below), new galleys and an innovative, pod-like overhead passenger service unit highlight just a few of the new amenities designed by Zodiac Aerospace that Delta customers will enjoy. The 9 inch high definition seat-back entertainment screens offer more content than any other domestic carrier. Each seat also as 110v and USB power to plug in electronics in flight.

The airline is the first in the world to receive the interior modifications on both Airbus fleets.

All 126 A320 and A319 aircraft will be retrofitted with the new interior by summer 2017. The larger of the two jets, the A320, will also receive in-flight entertainment, though not initially, through 2018.

Many of Delta’s Boeing 757 jets are receiving interior enhancements as part of the airline’s more than $770 million investment in the domestic fleet to provide a more consistent customer experience.

Photos: Delta Air Lines. All 126 of Delta’s Airbus A319 and A320s are undergoing interior upgrades. 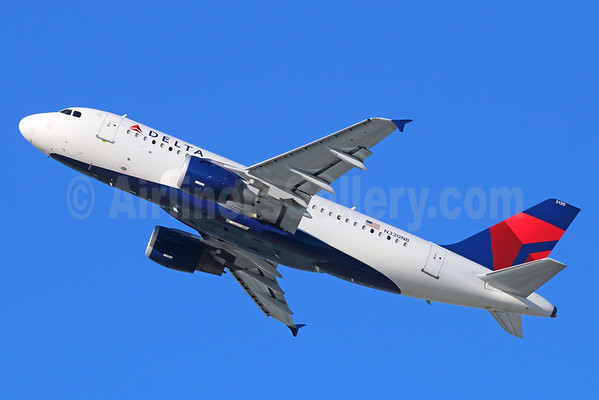