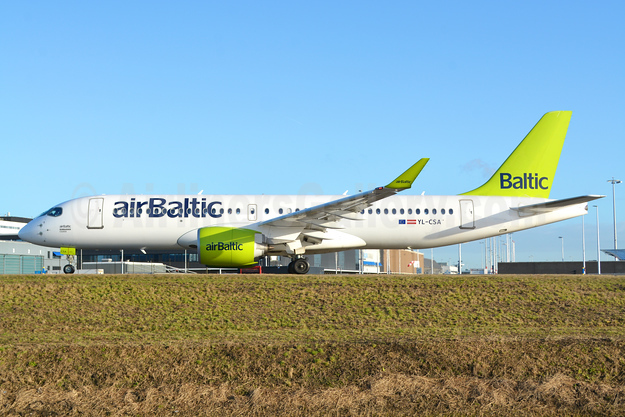 airBaltic has received its second of its 20 Bombardier CS300 jets on firm order. The modernized fleet will ensure growth of the carrier with at least 10 additional routes and 16% more tickets on sale in 2017.

The second CS300 aircraft, registered as YL-CSB, departed from Montreal Mirabel shortly before midnight local time on the last day of 2016 and arrived in Riga in 2017. The flight time was seven hours and 11 minutes and aircraft covered 6582 km non-stop between the Canadian and Latvian airports.

The pictured YL-CSA, the first CS300, is seen at Amsterdam. On December 14, 2016 this airBaltic CS300 operated the first commercial flight. With 120 passengers aboard, including local media, the flight departed Riga and landed in Amsterdam. airBaltic is operating the CS300 aircraft in a 145-seat, two-class configuration. The airline has ordered a total of 20 CS300 aircraft.

Since entering revenue service with Swiss, the CS100 aircraft has completed more than 1,600 flights — carrying over 156,560 passengers, covering over 1,181 500 km and serving 18 destinations.