Emirates reports a profit of AED 871 million (US$237 million), 69% down from the previous year

The Emirates Group on May 9 announced its 31st consecutive year of profit and steady business expansion.

In line with the overall profit, the Group declared a dividend of AED 500 million (US$136 million) to the Investment Corporation of Dubai for 2018-19.

His Highness (H.H.) Sheikh Ahmed bin Saeed Al Maktoum, Chairman and Chief Executive, Emirates Airline and Group, said: “2018-19 has been tough, and our performance was not as strong as we would have liked. Higher oil prices and the strengthened US dollar eroded our earnings, even as competition intensified in our key markets. The uptick in global airfreight demand from the previous year appears to have gone into reverse gear, and we also saw travel demand weaken, particularly in our region, impacting both dnata and Emirates.

“Every business cycle is different, and we continue to work smart and hard to tackle the challenges and take advantage of opportunities. Our goal has always been to build a profitable, sustainable, and responsible business based in Dubai, and these principles continue to guide our decisions and investments. In 2018-19, Emirates and dnata delivered our 31st consecutive year of profit, recorded growth across the business, and invested in initiatives and infrastructure that will secure our future success.”

In 2018-19, the Group collectively invested AED 14.6 billion (US$ 3.9 billion) in new aircraft and equipment, the acquisition of companies, modern facilities, the latest technologies, and staff initiatives, a significant increase over last year’s investment spend of AED 9.0 billion (US$ 2.5 billion).

dnata’s key investments during the year included: the acquisitions of Q Catering and Snap Fresh in Australia, and 121 Inflight Catering in the US; the buy-out of shares to become the owner of Dubai Express, Freightworks LLC; and a 51% majority stakeholder of Bolloré Logistics LLC, UAE; the build of new cargo and pharma handling facilities in Belgium, the US, the UK, the Netherlands, Australia, Singapore and Pakistan; the acquisition of German tour operator Tropo, and a majority stake in BD4travel, a company providing artificial intelligence driven IT solutions in the travel sector.

Across its more than 120 subsidiaries, the Group’s total workforce increased by 2% to 105,286, representing over 160 different nationalities, mainly influenced by dnata’s new acquisitions and its international business expansion.

Sheikh Ahmed said: “In 2018-19, we were steadfast with our cost discipline while expanding our business and growing revenues. By slowing the recruitment of non-operational roles, and implementing new technology systems and new work structures, we’ve improved productivity and retarded manpower cost increases.”

He concluded: “It’s hard to predict the year ahead, but both Emirates and dnata are well positioned to navigate speed bumps, as well as to compete and succeed in the global marketplace. We must continually up our game, that’s why we invest in our people, technology, and infrastructure to help us maintain our competitive edge. As a responsible business, we also invest resources towards supporting communities, conservation and environmental initiatives, as well as incubating talent and innovation that will propel our industry in the future.”

Emirates’ total passenger and cargo capacity crossed the 63 billion mark, to 63.3 billion ATKMs at the end of 2018-19, cementing its position as the world’s largest international carrier. The airline moderately increased capacity during the year over 2017-18 by 3%, with a focus on yield improvement.

Emirates received 13 new aircraft during the financial year, comprising of seven A380s and six Boeing 777-300ERs, including the last 777-300ER on its order book. The next 777 delivery is planned for 2020, when Emirates receives its first 777X aircraft. 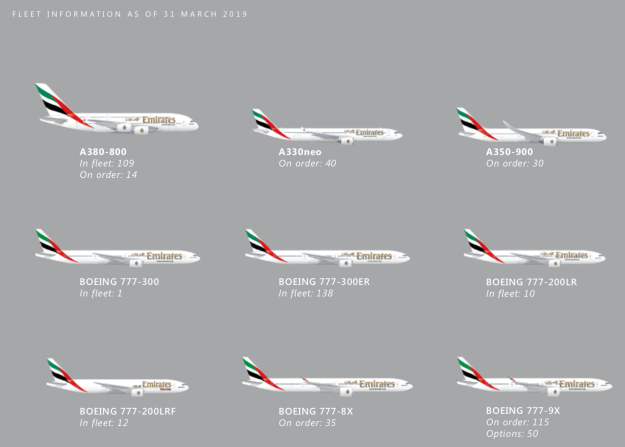 During 2018-19, Emirates phased out 11 older aircraft, bringing its total fleet count to 270 at the end of March. This fleet roll-over involving 24 aircraft was again one of the largest managed in a year, keeping Emirates’ average fleet age at a youthful 6.1 years.

It reinforces Emirates’ strategy to operate a young and modern fleet, and live up to its “Fly Better” brand promise as modern aircraft are better for the environment, better for operations, and better for customers.

Despite stiff competition across its key markets, Emirates increased its revenue by 6% to AED 97.9 billion (US$ 26.7 billion). The relative strengthening of the US dollar against currencies in many of Emirates’ key markets had an AED 572 million (US$ 156 million) negative impact to the airline’s bottom line, a stark contrast to the previous year’s positive currency impact of AED 661 million (US$ 180 million).

Total operating costs increased by 8% over the 2017-18 financial year. The average price of jet fuel climbed by a further 22% during the financial year after last year’s 15% increase. Including a 3% higher uplift in line with capacity increase, the airline’s fuel bill increased substantially by 25% over last year to AED 30.8 billion (US$ 8.4 billion). This is the biggest-ever fuel bill for the airline, accounting for 32% of operating costs, compared to 28% in 2017-18. Fuel remained the biggest cost component for the airline.

Against a backdrop of high fuel prices, strong competitive pressure, and unfavourable currency impact, the airline reported a profit of AED 871 million (US$ 237 million), a decline of 69% over last year’s results, and a profitmargin of 0.9%.

Overall passenger traffic remained steady, as Emirates carried 58.6 million passengers (up 0.2%). With seat capacity increasing by 4%, the airline achieved a Passenger Seat Factor of 76.8%. The slight decline in passenger seat factor compared to last year’s 77.5%, reflects the impact of slowing regional economies on travel demand, and strong competition in many markets.

An increase in market fares and a favourable class mix helped support a passenger yield increase of more than 3% to 26.2 fils (7.1 US cents) per Revenue Passenger Kilometre (RPKM), although the full impact was partly offset by the strengthening of the US dollar against most currencies.

During the year, Emirates raised AED 14.2 billion (US$ 3.9 billion) to fund its fleet growth, using a combination of term loans, finance and operating leases.

Testament to the increasing depth of the Japanese structured financing market for Emirates, all six 777-300ER aircraft delivered were financed via a Japanese Operating Lease with a Call Option (JOLCO) raising funding of more than US$ 1 billion. Emirates has now raised over AED 28 billion (US$ 7.6 billion) from the Japanese structured financing market since 2014.

A US$ 600 million corporate Sukuk issued in March 2018 financed 2 A380 deliveries; and the remaining 5 A380 aircraft were taken on a mix of operating lease, Export Credit Agency (ECA) backed finance leases, and finance leases arranged from institutional investors and bank base from Korea, Germany, UK and Middle East.

These deals demonstrate Emirates’ ability to unlock diverse financing sources through access to global liquidity, underscoring its sound financials and the strong investor confidence in the airline’s business model.

Emirates closed the financial year with a healthy level of AED 17.0 billion (US$ 4.6 billion) of cash assets.

Through the year, Emirates introduced product and service improvements on board, on the ground, and online.

Highlights include: the completion of a US$ 150 million programme to refurbish its entire Boeing 777-200LR fleet with new, wider Business Class seats and a fully refreshed Economy Class cabin; the launch of the Emirates Vintage Collection featuring fine wines that have been stored for 15 years; and new luxury products in First and Business Class developed in collaboration with brands like Bowers & Wilkins, Bulgari and BYREDO.

On the ground, Emirates introduced a new service so customers in Dubai can check-in for their flights from their homes, hotel or office, and have their luggage transported prior to their flight; it added a new dedicated lounge in Cairo and refurbished the existing Emirates Lounges in New York and Rome; and launched pilot trials for the world’s first ‘biometric path’ at Dubai airport utilising the latest biometric technology to ease Emirates passengers through check-in, immigration formalities, and boarding. 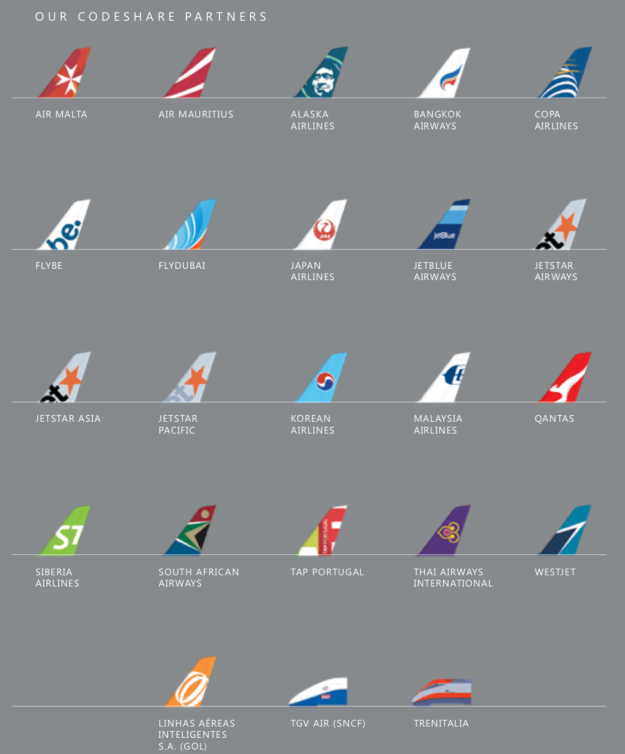 Online, Emirates became the first airline to launch 3D seat models using web-based virtual reality technology, allowing customers to preview its onboard product and select seats. It also launched a new feature on its mobile app, so customers can browse the thousands of movies, music and shows on offer, create personal playlists before they fly, and then sync from their devices to their personal seatback screens when they board.

Emirates SkyCargo continued to deliver a strong performance in a highly competitive market with dampening demand, contributing to 14% of the airline’s total transport revenue.

In an airfreight market facing unrelenting downward pressure on yields and slowing demand, Emirates’ cargo division reported a revenue of AED 13.1 billion (US$ 3.6 billion), an increase of 5% over last year, while tonnagecarried slightly increased by 1% to reach 2.7 million tonnes.

Freight yield per Freight Tonne Kilometre (FTKM) for the 2nd consecutive year increased by a further 3%, demonstrating Emirates SkyCargo’s ability to retain and win customers on value despite fuel price increases, and a weakened demand in many markets.

Emirates SkyCargo continued to develop innovative, bespoke products tailored to key industry sectors. In April, it launched Emirates AOG, a new airfreight product designed to transport aircraft parts quickly across the globe. This was followed in August by the launch of Emirates Pets and Emirates Pets Plus, which are new and enhanced air transportation products to ensure the safety and comfort of pets with services such as veterinary checks, document clearances, door-to-door transport, and the booking of return flights for pets.

Emirates’ hotels recorded revenue of AED 669 million (US$ 182 million), a decline of 10% over last year with competition further on the rise in the UAE market impacting average room rates and occupancy levels.