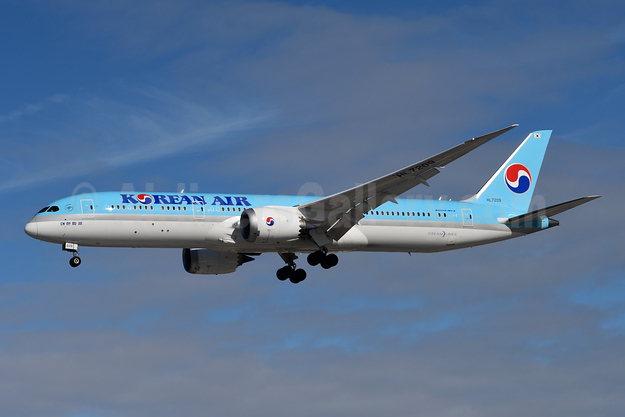 Boeing, Korean Air and Air Lease Corporation (ALC), today announced at the Paris Air Show the airline plans to add 30 new 787 Dreamliner airplanes to its fleet, with a commitment to purchase 10 new 787-10s and 10 additional 787-9 airplanes valued at $6.3 billion at current list prices. As part of this agreement, Korean Air will also lease 10 787-10s from ALC.

The airline, one of the largest transpacific carriers in Asia with 16 non-stop routes to North America, will introduce the larger 787-10 to complement its long-haul fleet of 787-9 and 777 airplanes. This order will be reflected on Boeing’s Orders and Deliveries website once it is finalized.

With this order, Korea’s flag carrier will quadruple its 787 fleet to 40 airplanes as it looks to strengthen its long-haul fleet.

The 787-10 is the largest member of the super-efficient and passenger-pleasing Dreamliner family. At 224 feet long (68 meters), the 787-10 can serve up to 330 passengers in a standard two-class configuration, about 40 more than Korean Air’s existing fleet of 787-9 airplanes. Powered by a suite of new technologies and a revolutionary design, the 787-10 sets a new benchmark for fuel efficiency and operating economics when it entered commercial service last year. The airplane allows operators to achieve 25 percent better fuel efficiency per seat compared to the previous airplanes.

Korean Air’s Aerospace Division is a key Boeing partner on the 747-8 and 787 programs, supplying the distinctive raked wing-tips for each model. The division is also a supplier of the new 737 MAX Advanced Technology (AT) Winglet.