After a two-year hiatus, Brussels Airlines is finally back to bringing nearly 25,000 festivalgoers of more than 130 nationalities to Tomorrowland in Boom. As of  July 13, 2022, more than 175 flights will depart from 69 different airports to Brussels Airport, where passengers will already feel the rhythm of the festival thanks to DJ sets amongst others.

For the 16th edition of the world’s best music festival, 600,000 festivalgoers from more than 200 different countries will unite in Boom for three weekends of Tomorrowland, this year in the theme “The Reflection of Love.” More than 700 artists are programmed across 14 stages. ​

Brussels Airlines brings the world to Belgium and Boom

Brussels Airlines sold nearly 13,000 flight packages to music fans flying out of 69 different airports to Belgium for the festival, accounting for nearly 25,000 Tomorrowland passengers travelling to and from Brussels on more than 350 Brussels Airlines flights. Ten flights will be transformed into exclusive #TMLpartyflights with a live DJ set at an altitude of ten kilometres. The very first party flight brought the first festivalgoers from Oslo to Brussels yesterday evening, 13 July, in the company of the British DJ duo Goodboys. To immediately get into the mood, festivalgoers in Oslo were treated to the first of eight gate parties. 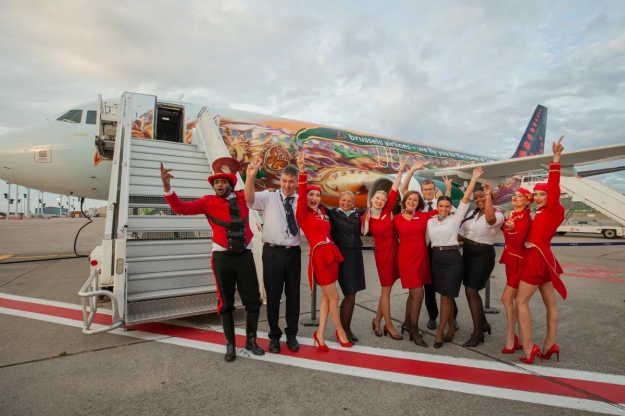 For the fourth time, Amare is bringing music lovers from around the world to Tomorrowland. Amare is one of Brussels Airlines’ five Belgian Icons, an Airbus A320 dedicated to Tomorrowland. The aircraft is painted on the outside with a gigantic eagle, and also brings the Tomorrowland atmosphere inside thanks to mood lighting and a Bose music system.

In total, 46,000 Global Journey packages were sold to festivalgoers of 133 nationalities. The five most common nationalities are American (almost 12%), German (10.5%), Spanish (over 7%), French and British (both just over 6%). Noteworthy is that 2% of the travellers are of Belgian nationality. 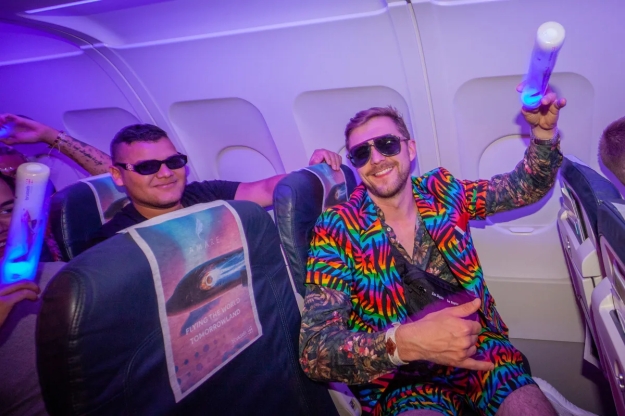 Brussels Airport to the rhythm of Tomorrowland

The unique Tomorrowland atmosphere continues upon arrival at and departure from Brussels Airport. Since mid-June a beautiful Tomorrowland globe was set up on the curb (the area between the departure hall and the car park), which lights up and spins at night.

On July 18 and 25 and August 1, DJs will be performing in the airport between 6 a.m. and 8 p.m. (at Beers & Cheers, Pier A). In addition to the live music, passengers can find the clothing line by Dimitri Vegas & Like Mike in the Fashion Boutique while cosmetics by Anouk Matton will be for sale in the Aelia Duty Free shop (Pier A).

As every year, Brussels Airlines is inviting everyone to take a free ride on the Ferris wheel on the festival grounds, with a stunning view of the fairy-tale landscape of Tomorrowland and beyond.

The airline’s employees will also be present at the service desk at the festival site, so that passengers can make adjustments to their flight or get the right information about their trip right away and at the festival.

In order to offer its passengers a carefree return journey after a fantastic Tomorrowland experience, Brussels Airlines has once again set up a mobile bag drop-off at the DreamVille campsite. Partygoers travelling back by plane can already check in their luggage at the campsite and therefore do not have to carry their suitcases and tents to the airport themselves.

More details are available in the infographic below.