Republic Airways Holdings (Indianapolis) and the Teamsters Airline Division have announced they have reached a tentative agreement on a new four-year contract. The more than 2,200 pilots of Republic are represented by Teamsters Local 357 in Plainfield, Indiana and fly for the Republic’s subsidiaries, namely Chautauqua Airlines, Republic Airlines (2nd) and Shuttle America.

The tentative agreement includes increases in pay that will place Republic pilots at or near the top of its regional airline peers. It also includes improvements in work rules, quality of life enhancements and more flexibility in scheduling as well as a significant signing bonus if ratified.

“At a time when many of our competitors are moving in the opposite direction on pilot compensation, we are thrilled that Republic is able to significantly improve the wages and benefits of the more than 2,200 women and men who safely fly more than 1,300 daily scheduled flights for our major airline partners,” Bedford said.

“This TA reflects the dedication and hard work of the union and the company’s negotiating committees,” said Republic Airways Executive Vice President and Chief Operating Officer Wayne Heller. “We thank the union representatives for their professionalism and commitment in reaching this agreement.”

The agreement will be presented to union members for review and a formal ratification vote, which is expected in March.

Alitalia (2nd) (Rome) has reached its goal to obtain $412 million in a cash call from its close investors according to Reuters. This will allow the struggling carrier to keep flying during the Christmas and New Year’s Day holidays. The cash call is part of the Italian government’s plan to keep the flag carrier flying while it searches for a new partner to rescue the airline.

Alitalia (2nd) (Rome) received good news yesterday (October 11) when its board of directors (including Air France-KLM) approved a capital increase as part of the Italian government’s sponsored 500 million euro bailout plan according to this report by Reuters. However with the airline losing an estimated 10 million euros a day, this amount will be exhausted in the next two months. Clearly the airline needs another financial overhaul to reduce costs and increase revenue. The Italian government has also called for Alitalia to join an alliance.

Details of Delta’s new and expanded Seattle/Tacoma service include:

The Seattle area is one of Delta’s fastest-growing international gateways. The airline currently operates nonstop service to six international markets including Amsterdam, Beijing, Osaka, Paris, Shanghai-Pudong and Tokyo, and recently announced additional service in 2014 to London-Heathrow, Hong Kong and Seoul, pending government approval. The new and additional flights will allow for convenient connections to all of Seattle’s international Delta flights.

As of January 1, 2014, every international Delta flight from Seattle/Tacoma will feature full flat-bed seats in BusinessElite, Economy Comfort seating and entertainment on demand in every seat throughout the aircraft.

Flybe (Exeter) is struggling to turn things around financially after reporting a loss of $63.2 million in the past fiscal year. The past year, according to the carrier, has been the most challenging year in its 10-year history. A new CEO, former easyJet executive Saad Hammad, is now closely looking at the company in great detail and bringing in new people to fill resignations.

According to its annual report, Flybe has removed 13 aircraft from the fleet and deferred another 16 aircraft. 75 percent of the fleet is now deployed on lower-risk contract flying, especially at Flybe Finland. The company is targeting a goal of over $77 million in long-term yearly cost reductions. 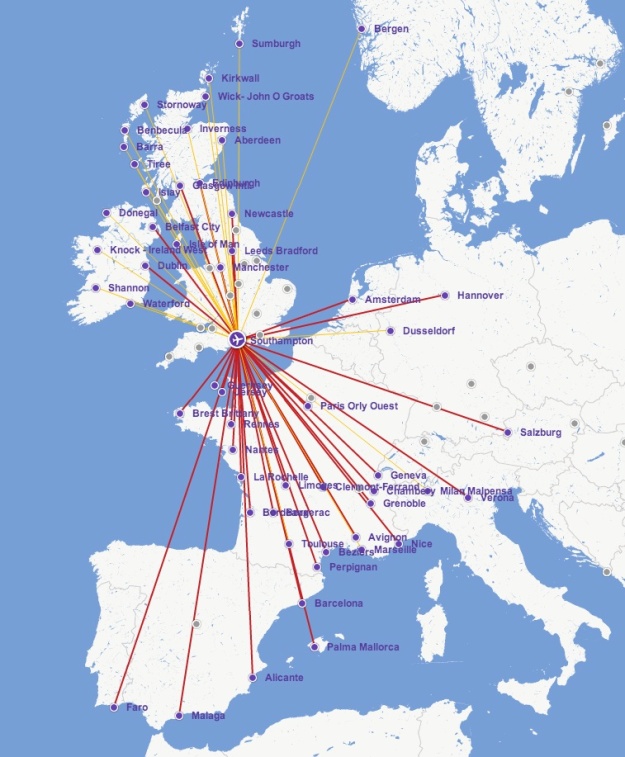 Flights depart at the top of the hour beginning at 7 a.m. Monday through Friday and will be operated by Delta Connection partner, Compass Airlines (Delta Connection) (Minneapolis/St. Paul) using Embraer ERJ 175 aircraft which accommodate 76 passengers in 12 First Class, 12 Economy Comfort and 52 Economy seats.

Customers flying the Delta Shuttle between Los Angeles and San Francisco will enjoy:

Delta has partnered with the City of Los Angeles and Los Angeles World Airports to invest $229 million to overhaul Terminal 5 at Los Angeles International Airport. The construction project has already begun and will be complete in 2015. Highlights of the project include doubling the size of the ticketing lobby and federal security screening checkpoints; an exclusive Sky Priority experience with a separate lobby and checkpoint; a renovation of the Delta Sky Club; new baggage carousels; upgraded facilities to improve international baggage recheck; and new finishes providing a cleaner, brighter customer experience. All Delta and Delta Connection flights serving Los Angeles offer customers the option of First Class, Economy Comfort or Economy seating, along with in-flight Wi-Fi. Delta operates the largest Wi-Fi-equipped fleet in the world, including all Delta Connection two-class regional jets.

In other news, Delta is also adding weekly Delta Connection Bombardier CRJ900 service from both Orlando and Raleigh/Durham to Nassau in the Bahamas beginning on December 21 per Airline Route. The carrier will also launch seasonal CRJ900 service between Fargo, North Dakota and the Atlanta hub also on December 21.

The proposed contract includes increases in pay, improvements in quality of life and more flexibility in scheduling. The TA still must be presented to union members for review and a ratification vote, which is expected to be held in July.

Combined Route Map (please click on the map for the full-size view): 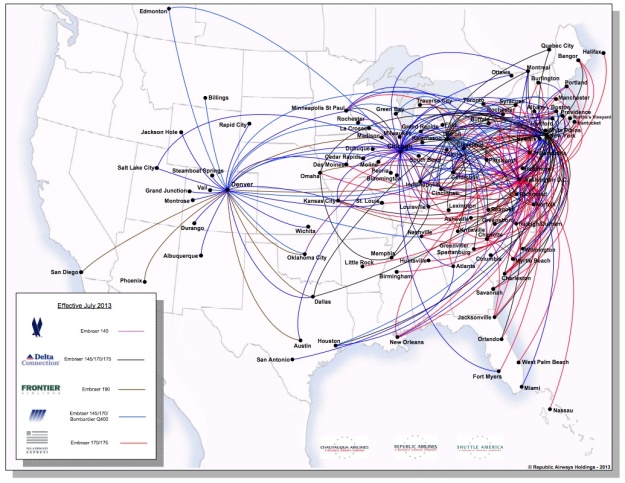 LOT Polish Airlines (Warsaw) has applied for additional state aid in the amount of over $115 million from the Polish treasury according to this report by Business New Europe citing treasury sources. The treasury has promised the citizens of Poland that this will be last bailout for the state airline. The treasury ministry must approve the request before it is sent to the European Commission in Brussels for the final approval.

There is also a report the airline will lease out out two of its new Boeing 787-8s.

LOT Polish will continue to shrink in size and go to smaller aircraft as the government continues its attempt to sell the loss-making carrier.

Oman Air (Muscat), the national carrier of the Sultanate of Oman has announced, effective on March 1, 2013, the successful launch of its new joint venture freighter operation partnership with DHL.

Oman Air Cargo has signed an exclusive Block Space Agreement with DHL for utilizing DHL’s capacity in both directions of its operation between Muscat (MCT) and Dubai (DXB).

Oman Air Cargo has been rapidly growing since its launch in 2009, making significant inroads into online and off-line markets. Further to the current partnership with DHL on the DXB-MCT-DXB route, Oman Air Cargo is looking at widebody capacity opportunities in partnership with other operators and airlines, connecting from airports in Muscat and Salalah, as part of its expansion program.

DHL will operate a Boeing 757-200 PCF on a weekly schedule into Muscat, a partnership between DHL and Oman Air Cargo.