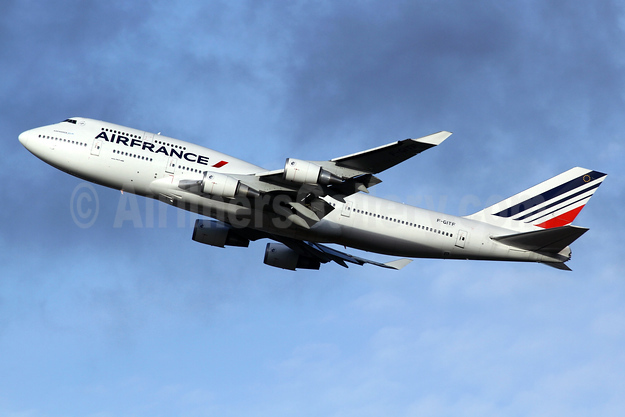 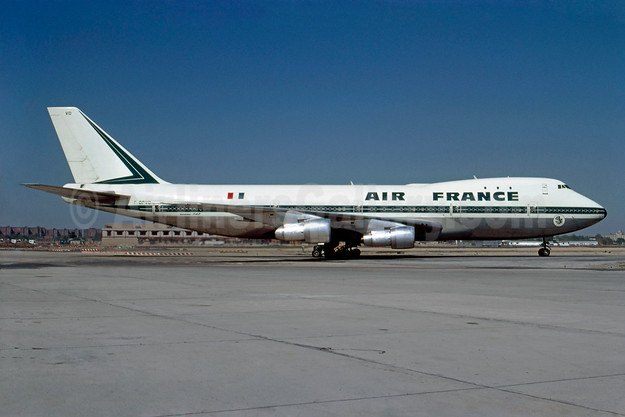 PIA-Pakistan International Airlines (Karachi) is planning to retire its last Boeing 747 (ex-Cathay Pacific Boeing 747-367 AP-BFY, msn 23920) within a month according to a report by Business Recorder. The report quotes PIA Chairman Nasser Jaffer in a recent interview with BR Research.

AP-BFY is currently being used on the high-density Hajj charters to Saudi Arabia. The last Jumbo, soon out of time, will be replaced by two wet-leased Boeing 767s according to the report.

Pakistan International Airlines is celebrating its 60th Anniversary in 2015.

Below Copyright Photo: Jacques Guillem/AirlinersGallery.com. Boeing 747-240B AP-BAT (msn 22077) taxies at Orly Airport in Paris in the original 1976 livery.

United Airlines (Chicago) is giving up on making a profit at New York’s John F. Kennedy International Airport. The carrier has just announced it will end all service on October 25 at JFK, where it failed to make a profit for the past seven years due to the lack of connections to other cities. United is moving it’s trans-continental p.s. service to its Newark Liberty International (EWR) hub. Delta is expected to acquire United’s JFK slots and United is expected to acquire some of Delta’s slots at Newark (subject to approvals).

more extra-legroom Economy Plus seats than any other carrier; and

individual seatback monitors and power ports for customers in every row.

With the addition of p.s. service at Newark Liberty, United customers flying on trans-continental flights to and from Newark in the BusinessFirst cabin will, for the first time, enjoy flat-bed comfort for their entire journey when connecting to and from flights across United’s extensive trans-Atlantic and trans-Pacific networks.

United will cement its role as the leader in trans-continental flying with more than 1,250 daily flat-bed seats – the most in the New York market – and a 44 percent increase in flat-bed seats year-over-year. The airline will fly up to 17 daily round trips Newark-San Francisco and up to 15 daily round trips Newark-Los Angeles, leading the industry with a total of up to 10,000 round-trip seats offered per day on the two combined key transcontinental routes.

Manhattan business travelers, particularly those who work on Wall Street and throughout lower and western Manhattan, enjoy easy access to Newark Liberty, the most convenient of the three New York-area airports.

With its launch of p.s. services at Newark Liberty, United will cease operations at Kennedy International Airport on October 25. United has entered into two separate transactions: Delta Air Lines plans to acquire United’s JFK slots, and United plans to acquire slots from Delta in Newark. Each transaction is subject to regulatory approval.

In launching p.s. service at Newark Liberty, United will move several Boeing 757-200 aircraft currently allocated to trans-Atlantic markets to p.s. flights. As it does so, the airline will increase the number of widebody Boeing 767 aircraft on trans-Atlantic flights, offering larger United BusinessFirst cabins and, on many flights, United Global First service.

United has already announced plans to introduce widebody Boeing 767 service on Newark flights to and from Barcelona, Madrid, Berlin and Hamburg.

Boeing (Chicago, Seattle and Charleston) and CFM International announced yesterday (May 7) that they successfully initiated flight testing of the LEAP-1B* engine on April 29 on a modified ex-Pan Am Boeing 747-100 (see below) flying testbed at GE Aviation Flight Test Operations in Victorville, California.

According to Boeing, “The testing is the next major milestone in a two-year program that will culminate in engine certification in 2016 and delivery of the first Boeing 737 MAX in 2017. The engine performed well and completed multiple aeromechanical test points at various altitudes during the five hour, 30 minute first flight.”

The LEAP-1B engine (above) is the exclusive powerplant for the Boeing 737 MAX family and is part of the most extensive ground and flight test certification program in CFM’s history. The first LEAP-1B engine began ground testing on June 13, 2014, three days ahead of the schedule set when the program was launched in 2011.

Over the next several weeks, the flight test program will encompass a comprehensive test schedule that will gauge engine operability, stall margin, performance, emissions and acoustics. It also will further validate the advanced technologies incorporated in the engine, including the woven carbon fiber composite fan, the Twin-Annular, Pre-Mixing Swirler (TAPS) combustor, ceramic matrix composite shrouds in the high-pressure turbine and titanium aluminide blades in the low-pressure turbine.

* The LEAP-1B is a product of CFM International, a 50/50 joint company between Snecma (Safran) and GE.

Video: From CFM International: Who do jet engines work?

Bottom photo: Boeing. The test airframe is the pictured GE Aircraft Engines Boeing 747-121 N747GE (msn 19651) seen departing from Victorville with the test engine. The historic Jumbo was originally delivered to Pan Am as N744PA on June 21, 1972.

Air France (Paris) is downsizing the number of Boeing 747-400 (above) routes next winter to only one route; the Paris (CDG) – Mexico City route, starting on October 25, per Airline Route.

Lufthansa (Frankfurt) will soon take delivery of this brand new Boeing 747-830 D-ABYT (msn 37844) (above). The new Jumbo was rolled out of the paint shop on February 8 at Paine Field sporting a basic 1968 livery, albeit minus the traditional metal finish on the bottom of the fuselage for that period. The aircraft will soon be flying test flights and we will have more photos soon.

Top Photo: Lufthansa. D-ABYT in the Boeing paint shop after the work was finished.

Air Hollywood, the studio in Hollywood where many movies involving airliners are filmed, is now offering the “Pan Am Experience” to help “passengers” relive the golden age of air travel  on the original Pan Am of the 1970s. Prices range from $297 for the First Class experience and $197 for Clipper Class. The “experience” never leaves the ground, it occurs inside the mock Boeing 747 cabin that is used for making movies. Air Hollywood describes the experience:

From its birth in 1927, Pan American Airways was the pioneer airline whose routes spanned 6 continents and more than 80 countries. Almost a century later, the name Pan Am is still a very powerful brand, and inside this Southern California motion picture studio sits an exact replica of the airline’s Boeing 747 and everything that made it so special.

Your Pan Am experience starts on the main deck with a cocktail and beverage service in the First Class cabin. Each stewardess that greets you will be adorned in her original 1970’s Pan Am uniform. Our Pan Am crew will offer various video & audio selections while you sit back in your Pan Am Sleeperette seat and sip a cocktail.

Soon after, you’ll climb the winding staircase where the crew will set your table for a truly memorable dining event. In classic Pan Am style, you’ll be offered your favorite cocktail and served a delightful gourmet meal. Everything from the china to the glassware is authentic with careful attention to the exquisite service delivery of the era and menu offerings of Pan Am.

After dinner, you will have an opportunity to view the vast collection of airline memorabilia and view other film production sets.

For the first time since Pan Am ceased operations, you can now relive the magic of this golden era in travel. We cordially invite you to personally experience this unique “flying” opportunity in the tradition of Pan Am.

All photos above by Air Hollywood.

IranAir (Tehran) has retired the last operating passenger Boeing 747-100 in the world. Boeing 747-186B EP-IAM (msn 21759) was ferried yesterday (January 8) from Mehrabad Airport (THR) in downtown Tehran (used for domestic flights) to nearby Imam Khomeini International Airport (IKA) southwest of Tehran (used for international flights) for storage in the cargo area. The flight lasted only 10 minutes on three operating engines and was flown by Captain Moghadam. EP-IAM is now grounded forever at IKA after almost 35 years of service

EP-IAM was delivered new from Boeing on August 2, 1979 and was flown its entire service life with the flag carrier of Iran. This is a testimony to Boeing for the durability of the airframe.

Thanks to Shahram (Shary) Sharifi for his eyewitness report from Iran.

In other news, IranAir restarted twice-weekly service from Mashbad to Bahrain on December 21, 2013.

ALPA and management negotiated for two-and-a-half years. Prior to the Evergreen crewmembers joining ALPA in 2007, negotiations were extended for over three years between the crewmembers’ independent union, The Aviators Group, and management. Mediated talks began in 2005 under the supervision of the National Mediation Board (NMB). The tentative agreement was reached in April 2010.