Aegean Airlines (Athens) is adding more destinations and frequencies to its existing network. Aegean has announced the operation of nine additional international flights from Athens, compared to the winter of 2013.

Aegean will also extend the operation of 8 summer seasonal flights into the winter period. The airline will also resume flights from Athens to Cairo. The winter timetable will operate from October 26, 2014 until March 28, 2015.

2014 summer flights from Athens to Stockholm, Copenhagen, Manchester, Zurich and Marseille will be continued into the winter season.

During the winter season, beginning on October 26, Aegean will continue to operate flights to Abu Dhabi, Beirut, Amman, while the company will resume flights to Cairo after a three year hiatus.

Aegean will also increase the size of its fleet with the order of seven new Airbus A320s, equipped with the new “Sharklets” on their wings, which will be delivered directly from the manufacturer. The deliveries of the seven new aircraft will begin in June 2015 and will be completed in early 2016.

For the Summer 2015 schedule, the airline will launch of 23 new routes. These new routes are mainly focusing on Corfu, Irakleion and Rhodes according to Airline Route.

From Corfu to Paris and Rome

Aegean is celebrating this award from Skytrax: 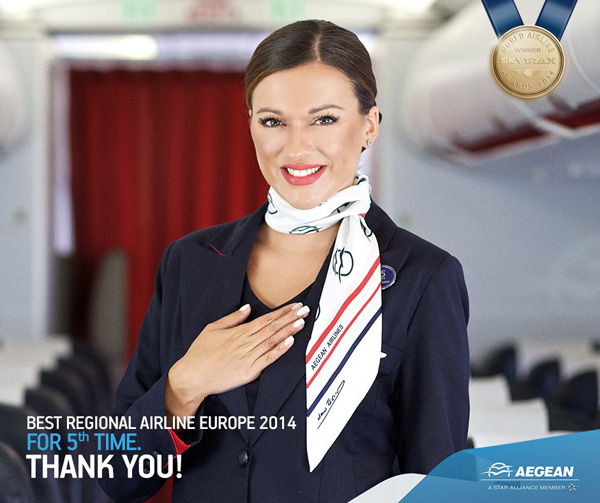