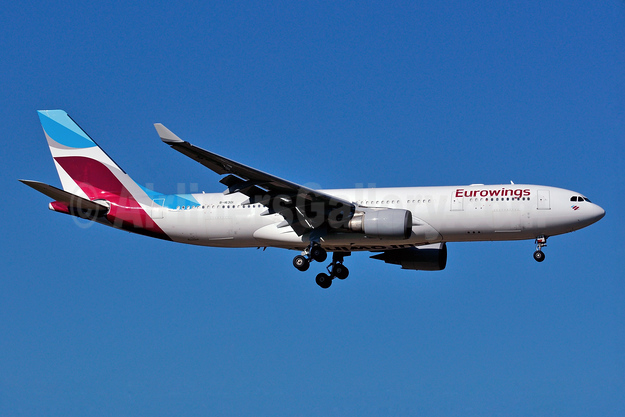 Eurowings (Dusseldorf) first Airbus A330-203 D-AXGA (msn 530), operated on behalf of Germanwings (2nd) (Cologne/Bonn) and performing flight 4U592 from Cologne/Bonn (Germany) to Palma de Mallorca (Spain) with 169 passengers and 13 crew, departed Cologne’s runway 14L when the engine access doors of the left hand engine (CF6) opened, separated and came to rest in the first third of the runway. The crew continued the flight and in absence of abnormal indications landed in Palma Mallorca without further incident about 2 hours later.

The airline confirmed that parts of the engine cowling separated, there were no abnormal indications, the crew received information when the aircraft was over southern France and continued the flight to Palma Mallorca. Lufthansa Technik as well as Germany’s BFU are investigating as to why the parts separated.

Germany’s BFU confirmed they were informed about the separation of parts of the cowling of the left hand engine and are currently undertaking a technical examination in coordination with Spain’s CIAIAC.

The Deutsche Flugsicherung (DFS), Germany’s ATC provider, reported that tower did not observe parts separating from the engine, the parts were later reported by another crew, collected in a runway inspection and identified, which took about 45 minutes. The crew was informed about the parts of engine cowling having been found when the aircraft was over southern France about one hour after departure. 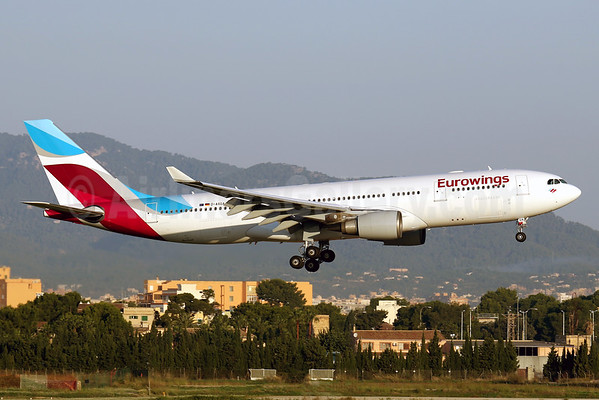 Eurowings (Dusseldorf) made its Airbus A330-200 commercial debut on October 14, 2015, initially operating service for Germanwings (2nd) (Cologne/Bonn). The new type entered service operating a flight from Cologne/Bonn to Palma de Mallorca as flight GWI588. The airline will also operate a flight from Hamburg to Palma de Mallorca from October 19. Services from both German cities to Palma will end on October 31.

On November 2, Eurowings will launch intercontinental Airbus A330 service to Veradero, Cuba, followed by the Caribbean destinations of Puerto Plata and Punta Cana. In addition, the airline will offer nonstop service to Bangkok and Phuket in Thailand, as well as Dubai.

The airline have two A330s which are wet leased from the Lufthansa-Turkish Airlines joint venture SunExpress. The Eurowings A330s are formerly EVA Air aircraft. The new Eurowings Europe GmbH was launched in Vienna on August 10, 2015.

The Eurowings A330s have 21 premium seats and 289 in economy, including a 46-seat economy “More Comfort” zone. This 310 seat configuration is a major change compared to Lufthansa’s three-class A330s which have 217-221 seats.

Lufthansa Group (Frankfurt) is happy with the early bookings for its upcoming new Eurowings long-haul services. The group also established Eurowings Europe (Vienna) on August 10. The group issued this report:

The new Eurowings looks all set for a successful launch of its attractively-priced long-haul services. Three months ahead of its first such flights – to the Caribbean, Thailand and Dubai – Lufthansa’s new budget-fare subsidiary reports promising booking levels.

“As the customer demand confirms, what we’re offering here is a highly attractive long-haul air travel product,” says Karl Ulrich Garnadt, Member of the Executive Board of Deutsche Lufthansa AG and CEO of Lufthansa German Airlines. “Our strategy of offering our further Eurowings brand, which is aimed particularly at price-sensitive leisure travellers, clearly meets a market need. And our decision to commence these operations in Cologne and the North Rhine Westphalia region has proved a prudent one, too.”

The new intercontinental services will be operated with Airbus A330-200 equipment (above). The first two aircraft are already being prepared to enter revenue service at the beginning of November. The Eurowings long-haul fleet will then gradually be expanded to seven Airbus A330s.

The new Eurowings is adopting the business and marketing concept that has already proved successful with its sister carrier Germanwings, which has firmly positioned itself as an innovative quality low-cost airline.

While Germanwings is focused on the German air travel market, Eurowings will now expand the concept throughout Europe, and will further extend it to intercontinental city and vacation destinations.

Eurowings will be opening its first operating base outside Germany in Austria. In collaboration with fellow Lufthansa Group carrier Austrian Airlines, Eurowings will offer European services from and to Vienna using Airbus A320 equipment – one aircraft from the 2015/16 winter schedules, and a second from March 2016. Both aircraft will be operated by Austrian Airlines.

The new Eurowings Europe GmbH was founded in Austria on Monday, August 10.

The company will serve as the starting point for further growth, which will see the establishment of several more operating bases throughout the European continent. Eurowings Europe is currently setting up its flight operations, which includes creating its own cockpit and cabin crew corps.

The new Eurowings cockpit crew positions are initially being advertised internally within Lufthansa, to give priority to existing pilots from the Lufthansa Group and those who have completed their flight training in Bremen and are awaiting suitable vacancies. The pilot recruitment process should then be extended to outside applicants in the second half of August. The cabin crew recruitment process will begin in the second half of September.

The remuneration systems at Eurowings Europe will be aligned to those already in place at other airlines within the Lufthansa Group. But they will also pay due regard to the particular conditions and challenges of the low-cost airline sector, particularly in terms of productivity levels and seasonal demand fluctuations.