The operation represents a continued expansion of Atlas Air’s non-asset-intensive CMI (Crew, Maintenance and Insurance) service solution, as well as its Boeing 767 platform. With the addition of the aircraft to Atlas Air’s operating certificate, the company’s fleet of Boeing 767s will increase to 15 aircraft, including nine operated for DHL in North America and two for DHL in the Asia-Pacific region.

The company issued this full statement:

“2014 is off to a good start, led by the initiatives we’ve undertaken to diversify our business mix, expand our aircraft and service offerings, develop new customers and position Atlas to take advantage of market opportunities,” said William J. Flynn, President and Chief Executive Officer.

“Within our ACMI segment, results benefited from an increase in the number of new 747-8 freighters in operation as well as an increase in flying for our CMI customers. In Dry Leasing, the investments we’ve made since early 2013 in attractive, modern 777 freighters on long-term leases with strong customers drove a significant increase in contribution from sources with highly predictable revenue and earnings streams.

“In addition, the expansion of our 767 aircraft service solutions and our growth into passenger charter operations supported the improvement in our results despite a seasonally soft contribution in Commercial Charter and the continued reduction in AMC Charter cargo volumes.

“Reflecting our global market leadership in outsourced aircraft assets and services, we have developed several new strategic customer relationships since the first quarter of 2013 that have enhanced the resilience of our business model.

Separately, the company announced the placement of two 747-8 freighters in ACMI service for DHL Express. The state-of-the-art aircraft will provide additional revenue cargo volume for DHL’s transpacific network growth. They replace two 747-400 freighters currently in service for DHL that will enter immediate revenue service for Atlas.

We are encouraged by our first-quarter performance and the positive direction of market trends so far in 2014, but we are maintaining our earnings outlook for the full year.

Airfreight volumes are improving, and recent forecasts suggest that airfreight demand will grow by a few percentage points in 2014 – the first real growth after three essentially flat years. Forecast airfreight yields continue to lag behind, however.

With still limited visibility into second-half airfreight market demand and yields, we continue to expect results in 2014 to approximate 2013, excluding an expected decline in our AMC Charter operations as we have previously discussed.

On a per share basis, earnings in the second quarter of this year should be similar to or slightly higher than our adjusted first-quarter earnings. As the majority of our earnings are typically generated in the second half of the year, we expect to update our expectations as the year progresses.

For the full year, we expect total block hours to be a few percentage points lower than 2013 block hours, with more than 70% in ACMI, less than 10% in AMC Charter, and the balance in Commercial Charter. Our Dry Leasing segment should show dramatic growth, with a contribution run rate in subsequent quarters that should be similar to the first quarter of 2014. Aircraft maintenance expense in 2014 should total approximately $175 to $180 million, and depreciation should be approximately $115 to $120 million. In addition, we anticipate an effective income tax rate of approximately 30%.

We remain confident in the resilience of our business model and our ability to leverage the scale and efficiencies in our operations. The business initiatives we have undertaken and the investments we have made have transformed the company to deliver meaningful earnings in any environment.

Should 2014 be the inflection point when growth returns to commercial airfreight and yields improve, our business initiatives and the investments we have made have positioned Atlas to be one of the prime beneficiaries. 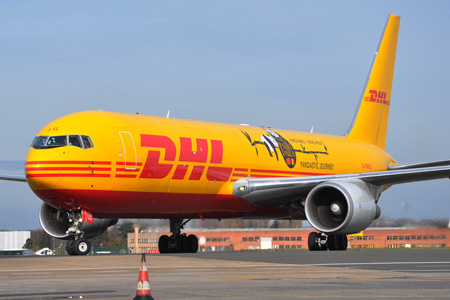 DHL today (February 23) sent off two giant pandas from Chengdu to Brussels, using a dedicated DHL Air (UK) (East Midlands) Boeing 767-300 freighter aircraft. Their departure marks the start of a 15-year cooperation of giant panda breeding research between China and Belgium. The female, Hao Hao, and the male, Xing Hui, both aged four, are expected to be delivered via DHL’s global transportation network to their new home at the Pairi Daiza animal sanctuary in Brugelette, Belgium on February 23.

“The Pandastic journey from China Conservation Research Center of the Giant Panda’s Dujiangyan panda base to Belgium’s Pairi Daiza will be a little over 8,000 kilometers. We are extremely proud to be entrusted with transporting China’s friendship messengers. The pandas, Hao Hao and Xing Hui, are without a doubt our VIPs — Very Important Pandas. A DHL team of specialists has worked with panda experts in China and Brussels to research and plan for their journey,” said Jerry Hsu, Chief Executive Officer of DHL Express Asia Pacific.

‘Hao Hao and Xing Hui’s Pandastic Journey’ started at the China Conservation & Research Center for the Giant Panda (CCRCGP) in Chengdu, China at 11:45 am on February 22, and will end with a delivery to a specially constructed Chinese Garden at Pairi Daiza, Belgium the following day. The two giant pandas were flown from China to Belgium on a dedicated DHL B767 freighter aircraft, accompanied by a team of two animal handlers, a veterinary physician and a plentiful supply of 100 kilograms of bamboo.

The pandas are expected to spend 15 years at Pairi Daiza, a 55-acre garden that plays host to over 5 000 animals. With the support of the University of Ghent, a special breeding and research program has been designed, aimed at helping to avert the future extinction of this endangered species.

To ensure an easy and comfortable journey, DHL and China Conservation & Research Center for the Giant Panda created bespoke travelling crates spacious enough for pandas to stay comfortable throughout the journey. The cages were also designed with a special roof in the style of ancient Chinese architecture.

“The panda is China’s national treasure, and also a messenger of friendship and peace,” said Wu Dongming, Managing Director of DHL-Sinotrans and Executive Vice President of DHL Express Asia-Pacific. “We are deeply honored for having been selected to transport Hao Hao and Xing Hui. With strong transportation expertise and capabilities, we believe DHL will carry out a Pandastic Journey with the utmost care and consideration.”

DHL has supported a number of conservation projects in recent years, including the return of nine silverback gorillas from the UK to the wild in Gabon, the delivery of two rare Sumatran tigers from the Australia and the US to ZSL London Zoo for a breeding program. Last year, DHL also provided expert logistics and both ground and air transportation to relocate several endangered Florida manatees.