Corsair International has taken delivery of its first Airbus A330-900, on lease from Avolon, to join the French airline’s fleet.

By selecting a total of five A330neos, Corsair is executing its strategy to become an all-A330 operator.

The aircraft features 352 seats in a three-class layout, providing all the comfort and amenities of Airbus’ leading ‘Airspace’ cabin, including state-of-the-art passenger in-flight entertainment (IFE) and full WiFi connectivity throughout the cabin.

The A330neo is powered by Rolls-Royce’s latest-generation Trent 7000 engines. The Corsair aircraft will also be the first A330neo to feature an increased maximum take-off weight of 251 tons. This capability will allow the airline to fly long-haul destinations up to 13,400 km (7,200nm) or benefit from ten tons more payload on board.

The A330neo is a new-generation aircraft and successor to the hugely popular A330ceo widebody family. As well as the new engine option, the aircraft benefits from a host of innovations, including aerodynamic improvements and new wings and winglets that together contribute to 25% fuel-burn and CO2 reductions. 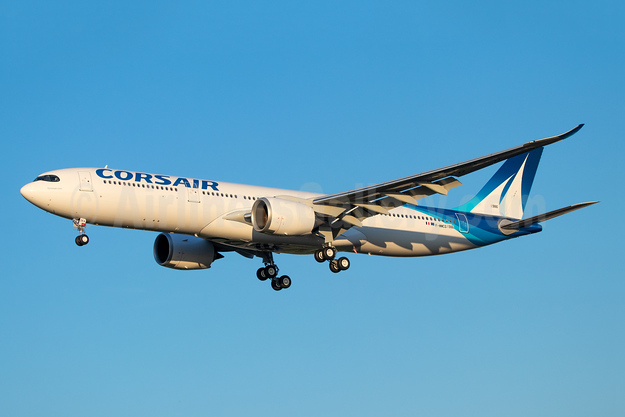 Airbus (Toulouse) has issued this statement:

Airbus’ first A330neo is coming to life one year after the program was launched, with the first ‘cutting of metal’ underway at its production facilities in Toulouse and Nantes. Machining of the first engine pylon started during the summer at Airbus’ facility in Saint-Eloi (Toulouse), while Airbus’ Plant in Nantes began production of the first A330neo center wing box.

The first A330neo Center Wing Box rib 1 (above) produced in Nantes uses an innovative Isogrid design with 330 triangular pockets which enables the part to meet all our rigidity, strength and low weight requirements.

The all-new pylon produced in Saint-Eloi is a key element in the A330neo’s innovative design, attaching the latest generation, fuel-efficient Trent 7000 engines to the wings. Made out of light weight titanium, the A330neo pylon uses cutting-edge aerodynamics, materials and design technologies derived from the A350 XWB. The A330neo pylon will be fitted with a new A350 XWB inspired fairing made from composite materials and titanium for ensuring optimised aerodynamics.

The A330-800neo and the A330-900neo are two new members of the Airbus Widebody Family with first deliveries scheduled to start in Q4 2017. The A330neo incorporates latest generation Rolls-Royce Trent 7000 engines, aerodynamic enhancements and new cabin features.

Avolon (Dublin), the global aircraft leasing firm, has firmed up its contract for 15 Airbus A330neo aircraft. Avolon became one of the launch customers of the A330neo after signing its initial commitment in July 2014 at the Farnborough International Airshow.

Airbus (Toulouse) has decided to adjust the production rate for its A330 Family from the current rate 10 to 9 aircraft a month in the fourth quarter of 2015 as it transitions towards the A330neo.

Since 2013, Airbus has been building 10 A330 Family aircraft each month, the industry’s highest ever production rate for this aircraft size category.

Airbus A330s from around the world Slide Show:

Transaero Airlines (Moscow) has turned again to Airbus to expand and modernize its fleet. The second largest Russian carrier has signed a Letter of Intent (LOI) with Airbus for 20 A330 aircraft (8 A330ceo and 12 A330neo). This agreement makes Transaero an important launch customer and the first European airline to commit to the A330neo. The A330s will allow Transaero to continue the massive fleet modernization program and to boost its medium and long-haul domestic and international network.

Transaero Airlines launched services in November 1991, and currently serves more than 200 routes all over the world. Transaero will begin operating its first Airbus aircraft (A321) in 2015. In 2011 Transaero Airlines signed a contact with Airbus for eight A320neo and in 2012 became the first Russian customer for the A380, ordering four aircraft, the first of which will enter into service at the end of 2015.

The A330-800neo and the A330-900neo are two new members of the Airbus Widebody Family launched in July 2014 with first deliveries scheduled to start in Q4 2017. The A330neo incorporates latest generation Rolls-Royce Trent 7000 engines, aerodynamic enhancements and new cabin features. Benefitting from the excellent economics, versatility and high reliability of the A330, the A330neo reduces fuel consumption by 14% per seat, making it the most cost efficient, medium range Widebody aircraft on the market. In addition to greater fuel savings, A330neo operators will also benefit from a range increase of up to 400 nautical miles and all the operational commonality advantages of the Airbus Family.